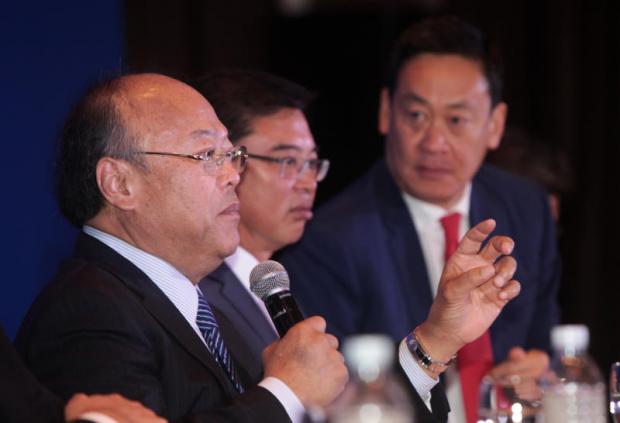 "If a project is not located near a mass-transit line or is small in scale, we'll do it ourselves," said Sansiri president Srettha Thavisin.

Sansiri announced the alliance yesterday, with both companies planning to develop projects worth a combined 30 billion baht in the coming years.

The company will be registered next month with initial capital of 100 million baht, with Sansiri and BTS holding equal shares. Both will invest 600 million baht each to develop the first condo project, which will be launched early next year.

It is slated for a five-rai site behind a car park at Mor Chit skytrain station opposite Chatuchak Park, with 900 units worth 5.5 billion baht. An environmental impact assessment has already been approved.

The plot is owned by BTS and will be sold to the venture for 1.4 billion baht.

BTS chairman Keeree Kanjanapas said the group returned to property development after staying on the sidelines for 20 years to focus on the skytrain.

"We have many plots of land along mass-transit lines that are viable for property development, but we're not ready to do it alone," he said. "Sansiri can help us."

BTS has several potential plots near mass-transit lines including 11 rai opposite Chatuchak Park and four rai in Phaya Thai district. Both were sold to Natural Park Plc, a SET-listed developer of which Mr Keeree owns 37%.

A five-rai site near its condo project Abstracts on Phahon Yothin Road opposite CentralPlaza Lardprao is where it plans to develop phase two worth 2 billion baht, and it owns 27 rai on Rat Burana Road near Kasikornbank's headquarters.

BTS expects to transfer 100 condo units worth 350 million baht this year, down from 2 billion baht last year, as it has no new residential projects. Last year it recorded 2.8 billion baht from property business including 800 million from a golf course and three hotels in Bangkok, Chiang Mai and Kanchanaburi.

SIRI shares closed yesterday on the SET at 2.12 baht, down two satang, in trade worth 378 million baht.