Happy to have served
Business

Happy to have served

Indonesian Foreign Minister Marty Natalegawa leaves office with a sterling record for regional leadership and raising the stature of his own country. By Ismira Lutfia Tisnadibrata in Jakarta

As the administration of Indonesian President Susilo Bambang Yudhoyono takes its leave today with the inauguration of Joko Widodo, one of the brightest stars of the outgoing cabinet will also be leaving the international stage. 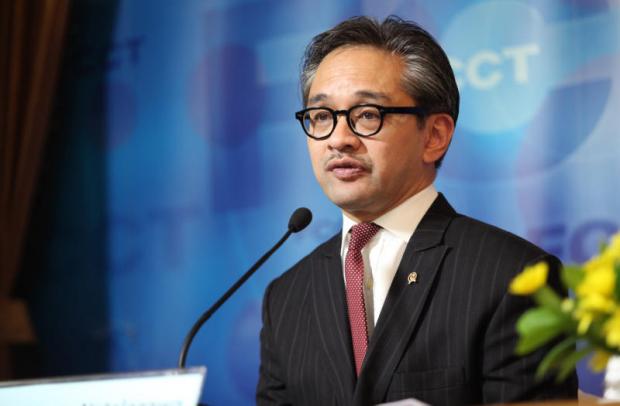 “Diplomacy, like many other things in life, is a process not an event. So it’s a never-ending effort. ... I am very confident that the next government of Indonesia will fulfill the kind of potential that we still have ahead of us”

Raden Mohammad Marty Muliana Natalegawa — better known as Marty Natalegawa — has served as the administration's foreign minister for the past five years. During that time he has made a noteworthy contribution to raising Indonesia's stature as a leader in the region.

The ministerial post is just one of many highlights in a three-decade career that is far from over. Young Marty joined the foreign ministry in 1986 at age 22 and held a variety of positions, including director-general for Asean Cooperation, before being named ambassador to the United Kingdom in 2005. Two years later he became his country's permanent representative to the United Nations in New York. In 2009 he received a call from President Yudhoyono, who had just been elected to his second term, to return to Jakarta and take up the foreign affairs portfolio.

That phase of his career is now over, but the most outgoing and assertive foreign minister that Indonesia has had in decades says he feels excited, as well as very grateful to have had the opportunity to serve in the area where he believed he could make the best contribution.

"There is a huge sense of relief in the sense that it is not a responsibility to be taken lightly, to carry out foreign policy of the fourth biggest country in the world, the third largest democracy, at a time of a great deal of tension in many parts of the world," Marty told Asia Focus.

Under President Yudhoyono's leadership, he said, Indonesia has reached the highest point in its engagement with the world, though he also expressed confidence that the best is yet to come for the country.

"Diplomacy, like many other things in life, is a process not an event. So it's a never-ending effort," he said. "Apart from the achievements, surely there are still many issues that need to be addressed. I am very confident that the next government of Indonesia will fulfill the kind of potential that we still have ahead of us."

Growing up in Bandung in West Java, young Marty began his journey of international discovery when his parents sent him to England for his schooling at age 11. He spoke no English at all at the time, and to master the new language, he would wake himself up in the middle of the night to translate into his own language word-by-word the English sentences he had learned during the day.

After attending Ellesmere College and Concord College from 1976-81, he earned a BSc at the London School of Economics in 1984. He then went on Corpus Christi College, University of Cambridge and obtained a Master of Philosophy in 1985.

It was during the last year of his undergraduate studies at the London School of Economics that he met his wife, Thailand-born Sranya Bamrungphong, who was pursuing her master's degree. As they got to know each other, he said, it was her sense of humanity and her concern for those who need protection that attracted him.

"I guess from the very beginning, even though we were from different countries and had different nationalities, we were united with the willingness to serve and basically just to be a good person," he said.

This willingness to serve is also what makes Marty consider himself more as a servant of the state than a political person. "I serve the public, that's what I have been trying to do. With all my shortcomings obviously."

While he may be his own harshest critic, with shortcomings "too many to list", he's not afraid of taking charge of a situation. His natural leadership skills are among the qualities that led him to be ranked one of the 500 most powerful individuals on the planet in 2013 by Foreign Policy magazine.

One of the most challenging experiences of his tenure came at an Asean meeting in Phnom Penh in 2012. The event was memorable, but not in a positive way, because the famously consensus-oriented Asean had failed to reach a consensus on how to address disputes over the South China Sea. Host Cambodia, not wishing to offend its Chinese patrons, was one stumbling block but not the only one.

"I told myself I was not going to let this be and that was why we quickly arrived at the solution by having the Asean six-points principles."

"Quickly" is a relative term since it took two days of shuttle diplomacy during which the Indonesian minister lobbied his fellow Asean foreign ministers intensively to agree on the six-point principles and eventually to produce a joint communiqué.

Marty was also instrumental in mediating the border dispute between Thailand and Cambodia in 2011 when Indonesia was holding the rotating Asean chairmanship. He and then-Thai foreign minister Kasit Piromya along with their Cambodian counterpart Hor Namhong appeared before the UN Security Council with a united voice to show the world that Asean had the capability of managing the issue despite its complications.

"It was simply driven by the fact that our region cannot afford a repeat of situations in the past when we were marked conflicts," he said. "I was keen to ensure that our region does not add to the world's problems. That's why as Asean chair at that time, it was a no-brainer for us to quickly encourage the two sides [Cambodia and Thailand] to manage the issue.

"The guns have been silenced. Now the two sides are back to how they should be in terms of close bilateral relations. This is about conflict management. I hope that in Asean we can continue to build this kind of tradition of being able to find ways and means to address problems that could affect our relations."

The regional bloc is now entering the home stretch in the drive toward the Asean Economic Community in 2015, and while the wider region is not free of tension and uncertainty, Asean is consolidating itself.

Hard work by many parties over the past decade has made it possible for the Southeast Asian region to be peaceful, stable and prosperous, and this is why Marty thinks the time has come for "Asean not to be shy about demonstrating and projecting its success".

"This is actually a very exciting and challenging time for Asean, especially for the new [Indonesian] government. It's a time full of promise and at the same time not without threat. That is why I think Asean first and foremost must solidify its unity to ensure continued stability in our region."

While there have been many memorable moments during the past five years, one thing that stands out in Marty's memory is his visit to Rakhine state in Myanmar in January last year to learn more about the plight of the Muslim Rohingya. He was struck by how difficult the conflict was.

"I think all of us are reminded of the humanity in foreign policy, that what you do actually is making a difference. It's a continuous reminder that this is a very noble profession that has a huge potential for us to do good in life," said Marty, who sees building good interpersonal relations between foreign ministers and leaders as a very important aspect of building confidence.

"We deal with one another as persons, as individuals, with our own concerns and worries. By making it that way, then there are no problems," he said.

"This job, as foreign minister, offers the opportunity to make a difference. When you see something that you think should not be, you try to make a change for the better."

As he steps away from the spotlight, the self-described "very private person" will not miss some of the public trappings that the job brings. He is grateful to his family — he and his wife have three children — who have been there to support him throughout his career with a lot of adjustment and sacrifices. "I am the luckiest person in the world to have such a wonderful and loving family and I can't expect anything more."

So what comes next for the veteran diplomat? After all, he's still only 50. Marty said he planned to take a break, away from the hustle and bustle, and to find new pursuits in life. But writing a book about his experience, as many other former high-ranking public figures do, is not one of them.

"I think people would have had enough of what I have been saying," he said. "I am really, really grateful to have been able to serve in the ministry. It's been a really huge honour."

The Constitutional Court has postponed its ruling in a landmark LGBT marriage equality case from Tuesday to Dec 14.

WASHINGTON - Top US generals said Tuesday that they advised President Joe Biden to keep American troops in Afghanistan and expressed concern that the Taliban has not severed ties with Al-Qaeda.

MILAN - Youth activists on Tuesday called out decades of "empty words and promises" from world leaders as they demanded action -- and money -- to tackle global warming ahead of a pivotal UN climate summit.

Food exports expected to grow by 3-5% this year

Shares in several sectors set to gain as lockdown eased