The Tourism and Sports Ministry plans to zone tourism on Koh Phangan and upgrade the island's image from that of the notorious full moon party destination. 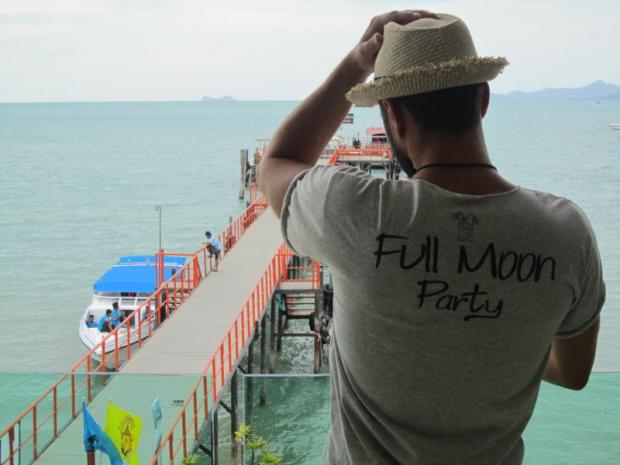 A full-moon party-goer waits to board a high-speed boat to Koh Phangan. The Tourism and Sports Ministry wants to promote the island as a green island. BOONSONG KOSITCHOTETHANA

Sugree Sithivanich, deputy governor for marketing communication of the Tourism Authority of Thailand (TAT), said the ministry has talked to local tourism operators to help change the island's reputation.

Koh Phangan should be promoted as a green island and serve as a role model to develop Koh Lanta and Koh Lee Pae.

After a survey, Tourism Minister Kobkarn Wattanavrangkul sees much potential for the island. The TAT will be a key player promoting a new image for Koh Phangan.

The island's five zone areas are lifestyle and trends, nightlife, historic and eco-tourism, the life of fishermen and seafood, and meditation, spa and learning.

Koh Phangan is host to the renowned full moon party on Rin Nok beach on the full moon of every month. The island has two sister islands — the larger Koh Samui in the south and the smaller Koh Tao in the north.

"The rebranding of Koh Phangan is proceeding. The half-moon and dark moon parties have been called off. We found that there have many interesting activities and tourism sites on the island," Mr Sugree said.

People on Koh Phangan make shrimp paste once a year, which costs around 1,400 baht per kilogramme. This is part of their way of life and it's interesting to know why the shrimp paste can cost so much, he said.

The TAT said more than 80% of operators on the island were local people. They share the same idea that they want to change the island's image and fend off exploitation by investors.

Besides, they think that zoning will make tourists stay longer and draw more people to the island, not only those who come for the parties.

Operators and villagers want to see Koh Phangan offer a variety of tourism products such entertainment and nightlife and also conserve the natural environment and local culture.

They do not want any coastal road loop like those on other developed islands. They want Koh Phangan to be a green island. Some locals have started organic farming for their own consumption as well as selling the produce, said Mr Sugree.