Part of the former High Court building, now privately owned, has been converted into condominiums. Local lawyers have sued to stop further development of a museum and restaurant.

Settled between the green warehouses of Yangon's Jetty Wharf, the historic colonial-era Keighley Street Goods Office of Burma Railways is in disrepair.

Originally constructed in the 1880s with an attached rail line, the once-bustling depot was an important transfer point for goods between the city's ports and inland Southeast Asia. Indeed, the city then known as Rangoon was itself a major trade hub for the region and a major source of income for the ethnic Indians who inhabited it in the early 20th century.

Much has changed, however. Today, the signage for the massive depot stands faded, while the red-brick façade in many areas has fallen apart, and the windows are almost completely punched out. Down below on a concrete platform leading to its entrance, a gaggle of ducks drink water from a large moldy puddle being created from a sewage spill pouring from a hole in the floor above.

Despite its poor upkeep, the structure is nevertheless used to this very day to transit raw materials, though low-wage coolies have little to do but troll the largely empty train platforms adjacent to the building.

"It is [a] very old building. Things do not work, though," said a smiling, shirtless administrator inside the building.

Other heritage buildings in the city have experienced a similar decline as most of the city's infrastructure went into disrepair when the military government took power in 1962. To make matters worse, developers and land owners looking to capitalise from revenues to be made from building larger and newer structures have allowed properties to slowly disintegrate.

According to the Yangon Heritage Trust (YHT), as much as 35% of downtown Yangon, or about 1,800 buildings, were destroyed between 1990 and 2011 to make way for new development projects. With many of those projects being built on the cheap, however, conservationists worry that much of the city's heritage is being irreversibly destroyed.

"One thing is that our vision is something that we cannot expect from everyone," said Daw Moe Moe Lwin, the YHT director.

Currently, just 189 buildings throughout all of Yangon are protected by the municipal government, while urban planners do not have a concrete definition of what a heritage site is, she said.

She also said that while municipal and regional authorities have actively sought to preserve historic Yangon following the country's transition to a quasi-civilian government in 2011, a lack of consolidated leadership on the issue has led to further, albeit fewer demolitions. 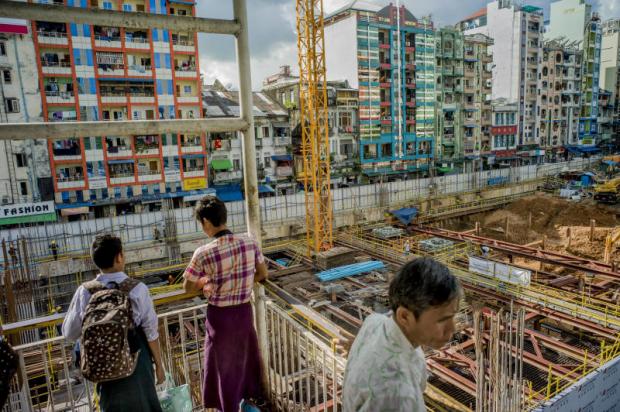 Yangon residents view a construction site where preservationists forced plans for a 20-storey building to be scaled back. Many property owners are letting old buildings deteriorate in the hope of getting permission to demolish them and make more profitable use of the land.

"We used to propose to the government … that there should be a taskforce including the stakeholders, NGOs or intellectuals, as well as officials to manage or control the assets, though this hasn't happened," she said, adding that while this is the case, the YHT has been called in on several heritage matters and have in some cases helped prevent the destruction of iconic buildings.

Still, there are other challenges to the preservation of Yangon's heritage, as confusing leasing agreements bury revitalisation plans of well-known public buildings in red tape, while confusing ownership rules for private property prevent signatories from investing in the upkeep of their buildings.

Another issue, he said, is that land owners often intentionally allow for buildings to become dilapidated in the hope of gaining government approval to partner with developers to demolish them and build more profitable structures.

"As a result, the land owner refuses to allow the upkeep of the building because the longer they can make the building look like it's going to fall over, the more they believe that they can convince the YCDC (Yangon City Development Committee ) to allow them to demolish it," he said. "Meanwhile, the tenants are sitting in there. They are unable to pay for a new roof, or upgrade the façade or even fix broken utilities or stairs."

"One person is on the conservation side and the other is on the modernisation side. The government has to look at both sides and, this being Yangon, there are a lot of things that have to be kept as is. That is the fundamental thing we believe," he said.

According to conservationists, city officials are at a crossroads, where they can opt to showcase Yangon's heritage as an aspect of its attraction, in much the same way as Penang and Singapore do.

"It was a major centre of international exchange. Famous writers and famous people lived here and wrote about it and so it has a legacy that is completely unique," said Bonnie Burnham, president of the World Monument Fund.

"I also think that in 40 or 50 years if that is successful, Yangon will be … the Charleston or the Boston of the Orient in terms of having utilised its history as part of its vision for itself in the future."

With the downtown cityscape consisting mainly of inhabited older buildings that are dilapidated with some on the brink of collapse, the issue for the government has become one of striking a balance between preserving heritage and promoting modernisation, said U Toe Aung, director of the urban planning division of the YCDC.

"Both of these have to be harmonised," he said.