A man and woman exercise at Lumphini Park in Bangkok on March 15. Almost a third of Thailand's population will be over 60 by 2050, according to the United Nations. That puts the country at a disadvantage among the Association of Southeast Asian Nations just as rising costs in China are pushing manufacturers to find new bases in the region. (Bloomberg photo)

Nuchnart Sakvisetchaikul got married four years ago in Bangkok at the age of 33. She has one child and doesn’t want more, an increasingly common trend among a population that is rapidly growing old.

"I want my child to have the best I can give," said Nuchnart, a senior executive at an insurance company in Bangkok whose mother looks after her 3-year-old daughter during the day. "My work is demanding. It's good that I have only one child."

Women marrying later and having fewer children is one reason why Thailand will join the ranks of its northern peers, whose labour forces are shrinking, just as the number of working- age people in other Southeast Asian nations rises in coming decades. The decline will constrain Thailand's long-term growth potential, analysts at Credit Suisse Group AG said.

Almost a third of Thailand's population will be over 60 by 2050, compared with less than a sixth in the Philippines and a fifth in Malaysia, according to the United Nations. That puts the country at a disadvantage among the Association of Southeast Asian Nations just as rising costs in China are pushing manufacturers to find new bases in the region. 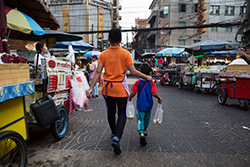 A woman walks holds a boy's shoulder as they walk through a market in the Phra Nakhon district of Bangkok March 15. Thailand’s pool of workers is shrinking as it tries to regain its position as a regional powerhouse for manufacturing and exports. (Bloomberg photo)

"Thailand is emerging as the old man of Asean," said Chua Hak Bin, a Singapore-based economist at Bank of America. "Demographics are useful predictors of real gross domestic product growth" and Japan's experience suggests an aging population will weigh on expansion and property, he said.

Thailand's working-age population is forecast to peak in 2017, a year after South Korea, according to estimates by Bank of America Merrill Lynch based on UN data. Indonesia won't get there till 2058 and the Philippines not until 2085. In China, which adopted a one-child policy in the 1980s, the decline began in 2012.

Thailand's pool of workers is shrinking as it tries to regain its position as a regional powerhouse for manufacturing and exports after floods inundated the industrial heartland in 2011, as well as political protests and the coup.

Overseas sales fell for a second straight year in 2014, the first back-to-back decline in almost two decades, while Vietnam and the Philippines posted strong gains. Thailand is forecast to have the slowest growth in the region this year after Singapore, Southeast Asia's only developed nation.

Central bank governor Prasarn Trairatvorakul likened the country to a patient with flu and arthritis -- the flu being an export slowdown caught from the global economy and the arthritis being the country's own structural problems.

The country needs to find a cure fast, "before it's too late," Mr Prasarn said in a speech on March 13. Thailand will be an aging society within 10 years and "this will make it even more difficult to cure our economic diseases."

It wasn't always like this: Thailand once led the charge in Southeast Asia's development, going from a low-income nation to an upper middle-income one in less than a generation.

The government had encouraged large families, setting up a marriage-promotion bureau in 1942 and holding contests to reward women with the most children. Participants generally had more than 15 children, a research paper showed.

Government policy flipped in the 1970s with the slogan "the more children, the poorer" as the country turned its attention to raising the standard of living. 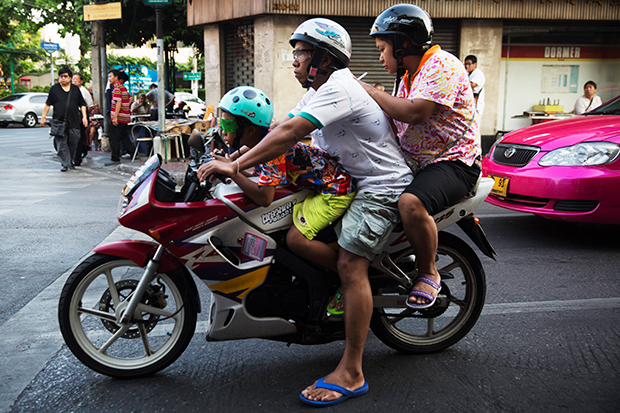 A child sits with adults on a motorcycle in the Chinatown area of Bangkok, on March 15. Thailand’s annual population growth rate for the 2010-2015 period is estimated at 0.3%, the lowest among the 10 Asean nations. (Bloomberg photo)

As more women were educated and began working, they had fewer children. The annual population growth rate for the 2010-2015 period is estimated at 0.3%, the lowest among the 10 Asean nations, UN data showed. The fertility rate in the same period is 1.4, compared with 3.1 in the Philippines and 2.4 in Indonesia.

"Our key problem is how we will shape our future and drive the economy with this demographic structure," said Arkhom Termpittayapaisith, head of the National Economic & Social Development Board, which is preparing a population plan for the next 20 years. "We need to make the public realize the seriousness of the impact and how to prepare for it."

The Thai government's efforts to boost the fertility rate include encouraging married couples to have kids and giving tax benefits and child-related perks. Proposals include raising the retirement age, encouraging mothers to join the workforce and revising rules for foreign workers, an NESDB draft showed.

Thailand's challenge is the opposite of Indonesia, where a birth-control programme has been revived after decades to prevent a burgeoning population from overwhelming its services. In the Philippines, President Benigno Aquino took on the Catholic Church to provide free contraceptives to the poor as unemployment rises.

An alternative for Thailand is to increase immigration. Human Rights Watch estimates there already may be about 3 million migrant workers from Laos, Cambodia and Myanmar in construction, agriculture and seafood processing, most of them undocumented. 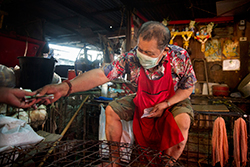 A vendor hands change to a customer at Khlong Toey market in Bangkok on March 15. Thailand’s working-age population is forecast to peak in 2017. (Bloomberg photo)

Thailand will need at least 3.3 million workers over the next three years in industries such as electronics and autos, the Office of Industrial Economics estimates.

The nation should move to less labour-intensive industries, a shift that's been hampered because the country is "the most unstable politically" in the region, said Santitarn Sathirathai, a Singapore-based economist at Credit Suisse. "The demographic challenge hasn't been a priority for the government, and has become an issue probably faster than they anticipated."

Restoring stability has been the government's main concern since seizing power last May after months of street protests. That helped lift the benchmark Thai stock index 10% in the past year, compared with 11% in Indonesia and 21% in the Philippines.

Shifting to higher-value industries needs capital investment and here again Thailand is coming up short. The country has the lowest real investment rate to gross domestic product in Asean, Mr Santitarn said. The ratio of public investment to GDP has roughly halved from the level in the 1990s, he said.

The labour shortage and rising wages led to a loss of competitiveness and a decline in the manufacturing index for 22 straight months through January. They are among the key concerns of manufacturers, said Isara Vongkusolkit, chairman of the Thai Chamber of Commerce. 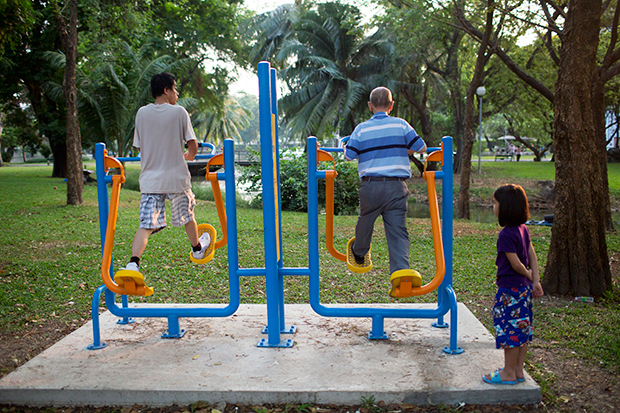 Thailand's demographic challenges, low investment and limited innovation may have reduced the trend GDP growth rate to 3.5% to 4%, from 4% to 5%, Credit Suisse said.

"We're heading toward growing at a developed-market rate while we're still not a developed market," Mr Santitarn said.

Naris Pramteerasomboon says government measures will make little difference because family size is a lifestyle decision. Married for five years and childless, Mr Naris and his wife decided not to have children and instead save for an early retirement.

"I don't think any government incentives will change our minds or anyone's minds about having kids," said Mr Naris, 40, a manager at a chemicals company in Bangkok. "It's my choice."