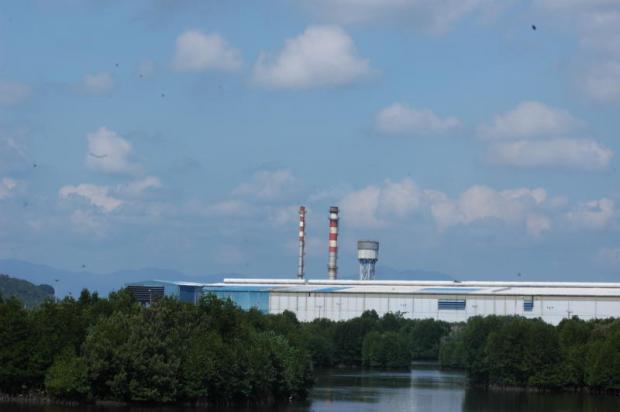 Sahaviriya's steel plant in Prachuap Khiri Khan's Bang Saphan district. The government wants to develop the Western Seaboard into a new industrial zone and link it to the Dawei project in Myanmar.

Industry Minister Chakramon Phasukvanich said the Western Seaboard project would be submitted for cabinet approval in the next two weeks after it had been studied and worked on since 1999.

According to the plan, the government will develop Prachuap Khiri Khan, Kanchanaburi, Phetchaburi, Samut Songkhram, Ratchaburi and Chumphon provinces into an industrial zone, mostly for the upstream-to-downstream steel sector.

"Since the Eastern Seaboard in Rayong is very crowded, we must create a new industrial zone in the West," Mr Chakramon said.

He said iron and steel projects would help to increase supply to meet steel demand in the construction sector ahead of implementation of the Asean Economic Community late this year.

The projects would also increase industrial trade along the border, Mr Chakramon said.

The government will continue to support investment in the upstream iron and steel industry in the new western zone.

"So if any private investors want to invest in the upstream iron and steel business, the government will provide full support."

Mr Chakramon said Sahaviriya Steel Industries Plc (SSI) was among the companies interested in investing in an upstream iron project in the zone.

SSI has spent 500 billion baht to develop 2,000 rai of land in Prachuap Khiri Khan province since about 1990, planning to build a steel complex with annual capacity of 30 million tonnes.

Mr Chakramon said investors in the Western Seaboard could link to the Dawei project, where the Myanmar government would also provide full support.

"SSI's project is in a perfect location for its upstream iron and steel business, and if the company wants to continue its investment there, the government will lend full support, as we also plan to develop our own upstream industry," he said.

"The size of upstream steel projects should be big enough to produce economies of scale. They should have a capacity of 4 million tonnes a year," he said.

However, it seems SSI wants extra support from the government such as measures to prevent the import of cheap steel from China.

Mr Chakramon said SSI had raised a proposal that the government impose a surcharge on imported Chinese steel, which was cheaper than home-made steel and would hurt local steel business.

"The Industry Ministry plans to meet with the Board of Investment to seek ways to help our steelmakers," he said.

Thai construction companies Italian-Thai Development Plc and Rojana Industrial Park Plc are expected to sign an agreement soon with the Myanmar government to start developing the first phase of the Dawei megaproject.