The popular Thai fruit has turned Thai Coconut Co into a multibillion-baht enterprise. Its boss has bigger plans

One of the coconut plantations that has a long-term contract to supply fruit to Thai Coconut Co.

For more than 20 years, a coconut in the eyes of Chanya Thanasakdipat was just a large, round fruit with a thick brown shell containing white flesh and a sweet, clear juice —a fruit that had helped her father earn a living for years.

Paying little attention to her father's business as a coconut trader in Prachuap Khiri Khan, young Chanya, who was then studying food science at Kasetsart University, wanted to be an office lady earning a salary at a big and reputable company in Bangkok.

She got a job at a major international trading company that dealt with processed food with clients around the world.

One day she found out that one of her overseas clients had been waiting for months for the delivery of coconuts he had ordered.

That was to be the start of her long journey to becoming an entrepreneur in the coconut business, the ubiquitous fruit she had grown up with and ignored in her early life.

Today Ms Chanya is the chief executive of Thai Coconut Co, a multibillion-baht enterprise that she started with two friends with a capital of 5 million baht.

It took Ms Chanya only six to seven years to establish the company. Today it has more than 800 employees and manufactures and exports not only coconut milk and juice but also coconut-based cosmetics including anti-ageing serum and other coconut-related products. 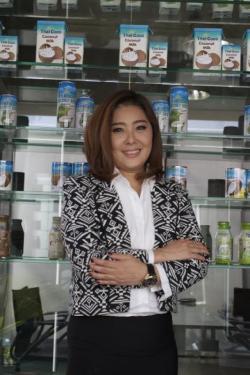 Chief executive Chanya Thanasakdipat believes Thai Coconut has a huge room to grow and the company plans to list on the Stock Exchange of Thailand for expansion.

In yet another milestone, Thai Coconut will soon be listed on the stock market.

"We are about to expand by listing on the Stock Exchange of Thailand (SET), aiming to expand the business in a sustainable way with diversified products," says Ms Chanya.

The company, which earns 2 billion baht with an average annual growth of 40%, accounts for only 3% of the global market of coconut-related products, she says.

"This is a clear indication that there is huge room for us to grow," she says, adding that 97% of revenue comes from exports and the rest from domestic sales.

"Around 80% of our income comes from being an OEM [original equipment manufacturer], adds Ms Chanya. "However, we have created our own brand by producing a ready-to-drink coconut juice."

The product has already made its mark in China, bringing in substantial revenue growth every year.

"As you can see every day in front of the Grand Palace, all Chinese tourists buy fresh coconut juice, which they seem to enjoy. This is because the Chinese believe that Thailand has the best coconut juice. Not many Thais realise this," Ms Chanya says.

Apart from China, the company also acts an OEM for several major food and beverage producers including Coca Cola, Nestle, Wall's and Swensen's. Its major customers are in Europe and the Middle East.

"We attribute a key part of our success to the popularity of Thai food, which uses coconut milk as a main ingredient. The more popular Thai food becomes, the more sales we can expect," she says.

Although the company is confident about sales in the food industry, Ms Chanya says she is looking beyond the food sector.

"We are still looking for more innovations that will help expand our products into several sectors," she says. Novelties such as coconut-based cosmetics are already exported to several countries in Europe.

"We, as Thais, have known about the many uses of coconuts for years. This knowledge has been passed down through generations. We are just passing on this knowledge to the world through our products," she says.

While Ms Chanya is upbeat about getting a bigger share of the global market, she does have one misgiving. "The only risk we see lying ahead is on the supply side," she says.

She says the company consumes about 200,000 coconuts per day, or 120,000 tonnes a year, an amount that Thai suppliers alone cannot meet.

There are only a few places in Thailand where coconut trees can grow well and produce fruit containing juice and milk that meet export standards.

"In order to solve the immediate problem, we have to import a certain amount of coconuts from Indonesia," says Ms Chanya, adding that she is now seeking ways to secure a sustainable supply in the long term.

What is the first she will do after raising funds from the SET listing?