Dogged by abuse allegations, Mitr Phol pulls out of Cambodia

Mitr Phol Sugar Corp has pulled out of its three plantations in Cambodia’s Oddar Meanchey province after years of allegations about illegal business practices and human-rights abuses, a media report said Monday.

The Phnom Penh Post reported that Asia's largest sugar producer withdrew from its concessions, which total 20,000 hectares, after an audit in 2013 by the Coca-Cola Co as part of its "zero tolerance" campaign against land appropriation.

"Mitr Phol has decided to withdraw from the concessions," Eang Vuthy, executive director of local NGO Equitable Cambodia, told the Post Sunday. "We have informed the government land committee."

Eang Vuthy said the European Union and Cambodian government both were conducting audits of the concessions and the NGO is encouraging them to expedite the case.

"The legal land owners were evicted and they should be compensated and their land returned," he added.

The newspaper said that when Mitr Phol got the concessions in 2008, the company promised to invest millions of dollars and create 5,000 jobs. But what they got instead were forced evictions, damage to the environment, lower income and destruction of areas of archaeological significance, according to a report released Monday by Action Aid and Oxfam. 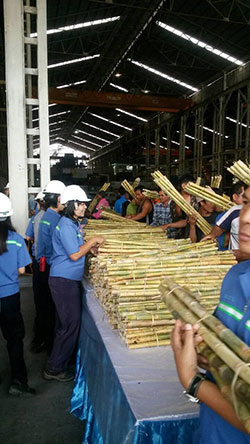 The report accused Mitr Phol of illegally confiscating thousands of hectares of land from villagers, but planting sugar on only 219 hectares.

Instead of building a sugar-processing plant, as promised, the company cleared timber and exported it as rail sleepers to Thailand, the report added.

Other allegations levelled against the company include arson, crop-looting, beatings and threats, and intimidation of villagers.

A local activist, who was jailed for protesting forced evictions in 2009, said Mitr Phol pulled out of the three concessions last month. The land, however, has not been returned to the community.

The Phnom Penh Post said its reporters could not reach Mitr Phol representatives for comment Sunday. The company's website however, "suggests it dedicates considerable resources towards social responsibility."

Mitr Phol, meanwhile, said last week it has earmarked 18 billion baht for expansion in both domestic and international markets.

CEO Krisda Monthienvichienchai told the Bangkok Post that the company planned to spend the money on five core businesses, including 159 million baht for sugar planting under its Mitr Phol Modern Farm project, and 8 billion baht on its domestic and international sugar business.

Mitr Phol also plans to spend 3.9 billion baht on renewable energy and 2.9 billion on its wood-substitute materials business. Another 2.7 billion baht will be set aside for expansion of local businesses in Australia and China that the company has acquired in recent years.