Farmers in Chai Nat province are preparing their fields to start the main rice crop, but they have been asked to delay planting due to the extreme water shortage. (Photo by Chudate Seehawong)

A rice glut that sent prices slumping more than a year ago is shrinking, just as El Niño arrives to parch paddies across Asia.

Global inventories were already heading for an eight-year low, including stockpiles so spoiled that top exporter Thailand may sell most for industrial use.

Now, the first dry-weather pattern since 2010 is threatening crops in the Philippines, Indonesia and India. At a time when world food costs are the lowest in more than five years, rice may surge more than 40% if monsoon-season rains falter, said Jack Scoville at Price Futures Group in Chicago.

“The bigger risk is yet to come,” said Fred Neumann, co-head of Asian economics research at HSBC Holdings Plc.

El Niño is causing havoc in the market for rice, the food staple for half the world’s population. The Philippines, once the biggest buyer, will have to import more to address weather-related disruptions to food supply, the International Monetary Fund said.

In Indonesia, imports are needed to curb domestic price increases, the United Nations said. Smaller crops in India, the second-largest exporter, will send shipments tumbling 17% to a five-year low, the US  Department of Agriculture estimates.

After almost a decade of surplus that sent rice futures tumbling to an eight-year low last month, global demand will reach a record 489 million tonnes in 2015-16, exceeding production for a third straight year, the USDA said June 10. The agency estimates inventories will drop to 91.4 million tonnes, the smallest since 2008, when tight supply sent prices to records and food riots erupted in Africa and the Middle East.

While a repeat of 2008 is unlikely, rice will get “a lot more” expensive, Hong Kong-based Neumann said. Indonesia has already seen food inflation accelerate to 7.9%, and the USDA predicted Indian prices will rise with a smaller harvest of the winter crop.

The warming waters of the equatorial Pacific change the atmosphere above the ocean to create the El Niño pattern, which may last through January and beyond, the US Climate Prediction Center said June 11. While every El Niño is different, it has been known to cause droughts in Asia, excessive rain in South America and wetter summers in North America.

The impact is not just on rice. India said the pattern may crimp the monsoon season that starts this month, potentially hurting food output. Australia, the fifth-largest wheat exporter, cut its forecast for this year’s crop on June 10, citing drier weather.

In the 30 days through June 14, rainfall was at least 40% below normal in rice-growing areas of Thailand and the Philippines, and down 15% in Indonesia, according to Speedwell Weather in Charleston, South Carolina. 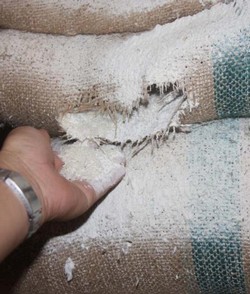 Rice grain stored in a warehouse at Wat Bot in Phitsanulok, Thailand, is found to have decomposed into a powder, public auditors said. Dead rats and pigeons were also found on the site. (Post Today file photo)

Rice prices have been mired in a bear market after Thailand amassed a record 17.8 million tonnes, as former prime minister Yingluck Shinawatra sought to support growers. A military government took power last year and pledged to unload the stockpiles.

But much of the inventory has been stored in warehouses without temperature controls and exposed to rain and pests, like the rice weevil. About 3 million to 4 million tonnes are suitable for humans, said Chookiat Ophaswongse, honorary president of the Thai Rice Exporters Association.

The military government will decide in a month whether to sell 13 million tonnes for industrial uses like livestock feed or to make ethanol, Duangporn Rodphaya, director-general at the Department of Foreign Trade, said on June 5.

With less inventory for human consumption, the price of 5% broken white rice, the Thai benchmark, will jump by more than a third to US$500 a tonne from $373 now, said Mamadou Ciss, president of Alliance Commodities (Suisse) SA in Geneva.

Tainted Thai inventories and the prospect of smaller crops from El Niño “will be a double whammy,” said Ciss, who has been trading the grain since 1984. “It will solve the oversupply situation worldwide.”