US game operator says benefits of integrated resorts, including casinos, are beyond dispute, writes Ariane Kupferman-Sutthavong

The Sands Las Vegas is the parent company of Marina Bay Sands, the unique casino on Singapore's Sentosa Island. The US company is confident Thailand will eventually approve gambling and is laying out cash to get media attention. (Photos by Wikimedia, Creative Commons Licence)

Despite the tiny odds of it happening, a top US game operator, Las Vegas Sands Corp, is willing to wager that Thailand will one day introduce legalised casinos.

A couple of weeks after military strongman and Prime Minister Prayut Chan-o-cha shot down the controversial idea, Sands, whose CEO Sheldon Adelson is ranked 18th on the 2015 Forbes billionaires list, last week flew a group of Thai journalists to Singapore to witness the economic contribution its Marina Bay Sands "integrated resort" has brought to the city-state.

"If given the opportunity, we would be interested in Thailand," Krist Boo, Marina Bay Sands' vice-president in charge of communications, told the Thai media.

Ms Boo said the country's developed infrastructure, skilled workforce and popularity as a tourism destination were all appealing factors.

Ms Boo declined to say whether a meeting has taken place between Marina Bay Sands executives and Deputy Prime Minister MR Pridiyathorn Devakula since the casino proposal was aired a few weeks ago.

"Until Thailand passes legislation, it's premature to comment. But we want to show you the Singapore model and let the Thai people, media and government decide," Ms Boo said.

On a quiet weeknight, casino guests can be seen puffing away on cigarettes as they place their chips - some with more caution than others - on the roulette tables.

On the other side of the room, a few elderly women stand sternly in front of colourful slot machines.

Although the casino - complete with a smoking area and VIP quarters - represents less than 3% of the floor surface occupied by Marina Bay Sands, it generates more than 70% of the integrated resort (IR)'s revenue, said Ms Boo.

After its US$5.6 billion (190 billion baht) investment bid, Marina Bay Sands is projected to contribute 1.25% to Singapore's gross domestic product this year. The economic benefits of integrated resorts are no longer in dispute.

Since the fanfare opening of Resort World Sentosa and Marina Bay Sands in 2010, the number of tourists coming to Singapore has risen by 56% while revenue from the tourism industry has shot up 84%, data from the Singapore Tourism Board shows.

Singapore faced robust discussions in parliament when the idea of legalised casinos was floated in 2005. The Singaporean government came up with a mitigation plan to address the negative effects of gambling.

Irvin Seah, a senior economist with DBS Bank who helped draft a development plan for integrated resorts when he was with the government, said the Singaporean government was quick to mitigate the social impacts of gambling.

It carried out public education campaigns and introduced deterrence measures, such as a S$100 (2,500 baht) entry fee imposed on Singaporeans who visit the casino, Mr Seah said.

The fee effectively barred those who couldn't afford to gamble from the establishment.

State bodies established since 2005, such as the Casino Regulatory Authority and National Council for Problem Gambling (NCPG), execute casino exclusions and visit limits.

Exclusion orders may be imposed on undischarged bankrupts and recipients of social assistance, or as requested by relatives of gambling addicts.

Self-exclusion requests can be made as well. As of today, 250,497 Singaporeans and foreigners are prohibited from entering local casinos.

Mr Seah said stories had come to light of civil servants becoming addicted to gambling, and a rise in illegal money-borrowing practices.

He argued, however, that Singapore's government had anticipated these ills and stepped in promptly. 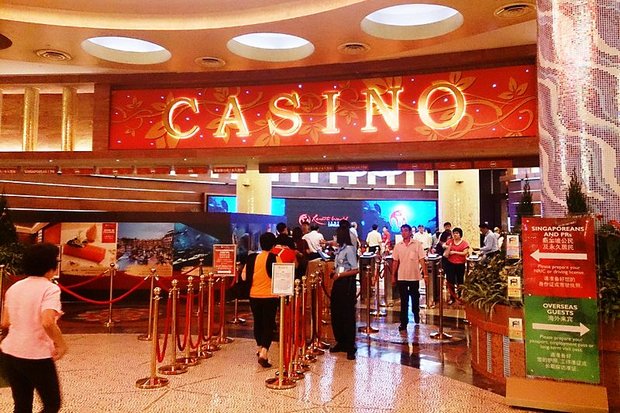 Singapore has strict rules and rigorous checking of who is allowed into the casino, by both age and nationality.

"The biggest hurdle a country wishing to have IRs must overcome is countering public mindsets about the social impacts of gambling," the economist added. Mr Seah said Thailand could hit the jackpot if it decides to allow IRs. Resistance to casinos could be reduced if the project is presented as part of an integrated resort, he added.

While Las Vegas Sands is mainly known for its casinos, the operator's activities are in fact varied. They range from a hotel, shopping mall, restaurants, theatre, and arts and science museum.

Tourism Minister Kobkarn Wattanavrangkul has rejected the integrated casinos idea for Thailand, saying this country does not lack for tourism opportunities.

However, the Singaporean economist argued the resort could become an additional attraction. "It all depends on how you operate it, how you regulate it and how you locate and connect it to the rest of the country," he said.

In the end, the decision should be based on an analysis of the positive and the negative impacts of casinos.