Erawan Group (ERW) is expected to suffer the heaviest blow among the top three listed hoteliers in the aftermath of the bomb blast in Bangkok's commercial district.

The group derives two-thirds of its revenue from hotels in the capital, while Minor International (MINT) will feel the least impact due to its more diversified revenue structure, stock analysts said.

Monday night's deadly bombing, which Prime Minister Prayut Chan-o-cha called the worst-ever attack on Thai soil, is expected to depress tourism business for one or two quarters before a full recovery takes place, RHB OSK Securities (Thailand) said. The securities broker revised down its forecast for the number of foreign tourist arrivals by 11% for this year and next to 26.6 million and 28.2 million, respectively.

It said history could repeat itself, as foreign tourists might avoid travel within Bangkok while en route to other destinations, similar to the New Year's Eve bombings in 2006.

The hotel business contributed 97% of Erawan's revenue in the first quarter. Its hotels in Bangkok generated 61% of revenue, while the five-star Grand Hyatt Erawan alone accounted for 25%. The Grand Hyatt Erawan is close to the Erawan Shrine, where the bomb exploded.

Minor's revenue structure is more varied, with business in food, retail, real estate and other areas. The first-quarter revenue contribution from hotels in Bangkok was just 7%.

"Every 10% change in average occupancy rate will have an impact of a mere 1% on the net profit of Minor due to its business diversification and various locations, but 4% in the case of Centel (Central Plaza Hotel Plc) and 31% for Erawan," the broker said.

Hotel and tourism-related stocks were at the centre of Tuesday's sell-off, and the downside pressure extended to other blue chips as investors weighed the bombing's effect on tourism, one of the few bright spots in the economy.

BMI Research, a unit of Fitch Group, said the blast could undermine the tourism recovery, deepening the country's economic woes.

"Now that an explosion has struck a major tourism hotspot, the recovery in the tourism sector as well as the hotel and restaurant industry could suffer a setback, undermining government efforts to bolster the ailing economy," BMI said. 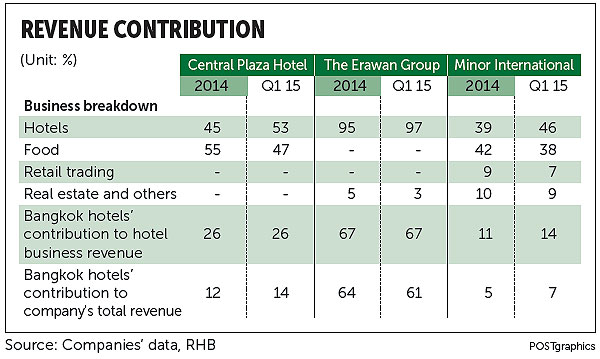