Eko Communications, a developer of mobile messaging apps for the workplace, has secured US$5.7 million in Series A financing from Asian venture capital firm Gobi Partners, the second-largest such funding for a Thai venture.

Proceeds will be used to improve office productivity, enhance marketing, bring on new talent and increase Eko's business footprint across Asia with a particular focus on the Chinese market.

Founded in March 2012 by Korawad Chearavanont, the eldest son of True Corporation chief Suphachai Chearavanont, the Bangkok-based start-up expects to begin recording revenue for the first time this year after providing free services for three years, with an expected annual recurring revenue of $1.2 million.

"We plan to establish an office in Beijing in the next few months and to expand to Asean countries early next year," said Mr Korawad, 20, Eko's founder and chief executive. 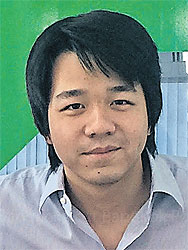 About 90% of revenue will come from abroad, mainly from China.

Eko's clients range from major banks to medium-sized retailers. Its customers include public companies with more than $25 billion in market capitalisation spanning Asia and beyond.

Enterprise mobile messaging apps are still in their infancy in Thailand but the business has high growth potential because many businesses want technologies with enterprise-specific security and reliability, Mr Korawad said.

Unlike other apps built for personal use that focus on social and entertainment features, Eko's apps are specifically designed for all-purpose office communications by combining the organisational power of email with the simplicity and speed of mobile messaging.

The company is developing its enterprise mobile app in Chinese and Thai versions.

Mr Korawad said Eko's active user base had grown by more than 1,800% since April 2015. The company has gained particularly strong traction in China.

"We expect to see a profit in our year-end earnings," he said.

Founded in 2002, Gobi Partners has an investment focus on digital media and technology companies.