The Ratchaprasong bombing on Aug 17 took the country and the world by surprise. We would like to express our deepest condolences to the families of the victims. Thailand too is a victim since authorities have noted the bombers intended to damage tourism and the economy. The extent of the harm done to tourism is what we will examine today.

Thailand's economic recovery over the past year has been much slower than expected. We have been relying on only two engines of growth: government spending and tourism. However, the fatal bombing in the heart of Bangkok has dealt a blow to the latter. If the tourism engine shuts down, only one engine will remain and the outlook for the recovery will be dire.

The importance of tourism: How deep will the impact on tourism be and how long will it last? First we need to know the size of the tourism industry relative to the overall economy. According to the Tourism Department, revenue earned from foreign tourists totalled 1.2 trillion baht last year. With Thai GDP at 13 trillion baht, tourism accounts for almost 10% of economic activity. By comparison, public investment accounts for only 5%. 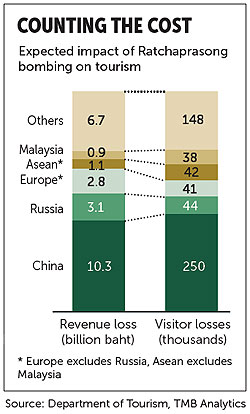 Tourism represented only 5% of GDP in 2010, so we can see how its importance has grown. Tourism revenue has risen by almost 20% per year on average since 2010, with foreign arrivals up 12% a year. China and Russia have been the key sources of growth, with average annual increases of 45% and 41%, respectively, although Russian arrivals have slumped in the past year due to the sharp depreciation of the rouble.

In 2010, Chinese tourists represented just 7% of all visitors to Thailand but now top the table with a 27.3% share in the first seven months of this year -- up dramatically from 19% in 2014, according to Tourism Department statistics.

Shocks to the system: Despite the strong growth, Thailand's tourism industry has been subjected to various shocks over the past 12 years including pandemics such as Sars in 2003, bird flu in 2005 and H5N1 influenza in 2009. In April and May 2003, when fear of Sars reached its peak, foreign arrivals fell 45% and 50% year-on-year, respectively. In short, we lost 800,000 tourists in just two months.

The last but most important source of shocks is political turmoil. This is partly because political unrest usually takes place over an extended period of time, thus creating a prolonged impact on tourism. Take, for example, the conflict that started in late 2013 and led to the coup in May 2014. Tourist arrivals from January-September 2014 shrank 11.6% year-on-year, equal to 2.3 million people. That worked out to at least 100 billion baht in revenue.

Note that these are conservative estimates since we're looking only at the months when growth rates were negative. The total effect is likely to be larger if months with positive growth rates are included.

Ratchaprasong bombing impact: how deep and how long? Our analysis suggests the deepest impact on tourism will be seen in late August once data become available but will show up as more pronounced in September. Yet starting from October, conditions should improve markedly, and everything will return to normal pretty quickly. In total, we are likely to lose 550,000 tourists or 25 billion baht in revenue, equivalent to only 0.2% of real GDP.

We forecast 40% of the 25-billion-baht loss will come from Chinese tourists. This reflects not only the size of the Chinese market but also the high sensitivity of Chinese visitors to adverse events. In this case, Chinese travellers were killed while visiting a site in Bangkok that is popular with their countrymen.

Next, we expect losses from Russian and European visitors of 3 billion baht each or 11% of the total. The loss in visitor numbers should be on par with that from Asean excluding Malaysia -- about 40,000 each. The major difference is length of stay. These tourists spend 16 days on average in Thailand compared with six days for Asean visitors. In other words, losing one European tourist is equivalent to losing 2.5 Asean tourists in terms of duration.

Admittedly, assessing the impact of the Ratchaprasong bombing is not easy. Our study has to be based on what happened after previous shocks, each of which had unique characteristics. Some had more impact than others, while some lasted longer.

How the government approaches each situation to rebuild tourist confidence matters a lot. The longer the attempt at resolution drags on, the more impact the tourism industry will feel.

Despite all their differences, there is one thing in common to all these shocks -- the resilience of the Thai tourism industry. Once the shock subsides, tourism comes back every time.

The Ratchaprasong bombing is no different.

TMB Analytics is the economic analysis unit of TMB Bank. Behind the Numbers is co-authored by Peerawat Samranchit and Benjarong Suwankiri. They can be reached at tmbanalytics@tmbbank.com

SYDNEY: Incoming prime minister Anthony Albanese vowed to reset Australia's relations with the world and sweep aside the country's reputation as a climate laggard Sunday, as he raced to form a government in time for a key Tokyo summit.

LYSYCHANSK, Ukraine: The echoes of artillery fire made Deacon Sergiy question his allegiances as he descended into a candlelit basement to lead prayers at a war-damaged church on the east Ukrainian front.

3 rescued after yacht capsizes off Krabi

KRABI: Three people were rescued after their yacht capsized off this southern coastal province on Sunday morning, according to a Thailand Marine Enforcement Command Centre (Thai-MECC) Region 3 press release.