This year will be the tipping point for Thailand's mobile payment and digital wallet system, which could become a viable everyday payment tool over the next few years, say industry veterans.

This will be fuelled by the proliferation of smartphones, the growing adoption of a digital lifestyle, a solid telecommunication infrastructure and a greater variety of service providers as well as the government's policy to promote national electronic payment (e-payment).

In late December, the cabinet approved the Finance Ministry's national e-payment master plan to promote electronic payment across the board with a view to creating a cashless society.

The e-payment master plan is expected to save the country 75 billion baht. Of the total, 30 billion baht would come from reducing the use of cash and cheques, and the remaining 45 billion from the decline in traditional paper-based billing and statements.

The government's Any ID scheme -- which will enable anyone to transfer money and make financial transactions using their ID card, mobile number or email address -- and the expansion of electronic data capture will be completed by this June.

E-payment is aimed at allowing people to access money transfer services even if they do not have a bank account, serving e-commerce, plugging loopholes in the tax system and directing subsidies to the underprivileged.

Last year's mobile payment and e-wallet transactions on the three major mobile networks -- AIS, DTAC and True Move -- are expected to be worth 90 billion baht.

Korkit Danchaivichit, deputy secretary-general of the National Broadcasting and Telecommunications Commission, says the regulator and the Bank of Thailand will discuss how to regulate the mobile money market, expected to gain momentum in the year ahead.

The full commercial launch of fourth-generation (4G) wireless broadband service plus the greater availability of affordable 4G-enabled handsets are also expected to boost the number of mobile internet users, eventually leading to increasing use of mobile payment and digital wallets.

"This year, we'll see changes in consumer demographics which will drive the adoption of mobile payment and trends in the utilisation of mobile banking," says Mr Korkit.

The top-up prepaid mobile phone market is expected to be worth 5 billion baht per year, with mobile operators earning 20-30 million baht in interest.

The mobile wallet and payment system will enable consumers to pay the actual cost of goods and services on a satang basis rather than being rounded up to the nearest baht, Mr Korkit says.

"We expect mobile payment transactions to surge by 1,000% this year."

Target customers for mobile payment are credit card users aged 15-40 who are willing to pay for online services, and non-bank users.

So far 16 million customers have downloaded mobile wallet apps from the three major mobile operators, but fewer that 3 million are active users.

Mr Punnamas, who is also chairman of the Thailand E-payment Association, says the national e-payment system requires a clear and concrete policy regarding the amount of mobile numbers and email addresses allowed to conduct payment transactions per user. 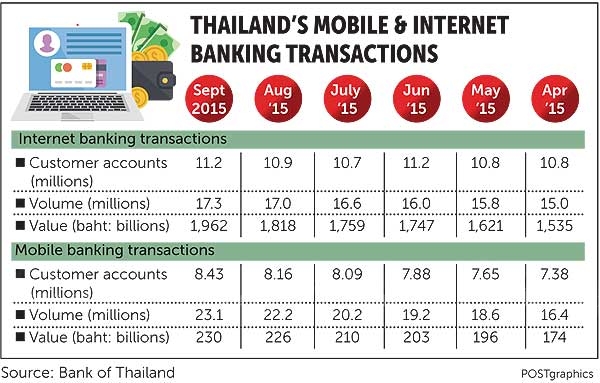 In order to strengthen the mobile payment and mobile money ecosystem, Mr Punnamas says policymakers need to allow neutral and independent clearing houses to provide the infrastructure for the automated processing and settlement of transactions to non-bank service providers.

In addition, he says a pooled mobile payment infrastructure is needed to reduce the investment costs and cut the operating costs of payment service providers.

TrueMoney aims to become Asean's leading player over the next few years, Mr Punnamas says. Last year the company spent 1 billion baht in the six countries where it has operations to cash in on the growth of e-payment.

"Mobile payment in Thailand will take time to fully take off since the banking system and facilities are behind those of Singapore," says Supreecha Limpikanjanakowit, managing director of Advanced mPay, the mobile payment arm of AIS.

He urges the government to speed up the development of a digital economy with the implementation of security standards for digital payments, including an e-tax invoice system.

"Encouraging consumers to use social commerce technologies will spur the use of mobile payment," says Pawoot Pongwittayapanu, chief executive of efrastructure Inc, the parent company of Pay Solutions, a Bangkok-based social media payment service provider under the Pay Social brand.

Mr Pawoot adds that transport services, including the skytrain, subway and airport rail links, will be another key area driving the mass adoption of mobile payment.

The company is spending 200 million baht developing its own mobile payment gateway and services to capitalise on growing opportunities.

IP Payment Solution also provides a mobile payment gateway and e-money system to organisations who want to provide e-payment services without investing in the necessary infrastructure.

"Thailand's e-payment market is the fourth fastest growing in Asia," says Michael Yeo, research manager of IDC Financial Insights, adding that Thailand is one of the most promising markets for mobile payments in Asia.

Thailand's cashless payments grew by 20% on average during 2010-15, the fourth fastest growth behind China, India and Indonesia and ahead of Malaysia and Singapore, both at 9%.

Current e-payments in Thailand (of which mobile payments are a part) are expected to surge from 68.2 billion baht in 2015 to 143 billion baht in 2020 and will be dominated by non-bank players such as AIS, True, Smart Rabbit Card and Thai Smart Card.

Mr Yeo adds that the three major telecom operators and app service providers such as Line Corporation are likely to be the largest players in mobile payments in Thailand, either by themselves or in partnership with others in the ecosystem.

Line will be an increasingly relevant player to watch, especially as it begins to act more as a mobile commerce platform which will allow informal vendors to sell goods and receive e-payments through Line.

Other efforts such as mPay from AIS and True Move's TrueMoney have already experienced some success in certain areas such as mobile phone top-ups. But they will need to work on more partnerships with e-commerce websites in order to really take their payment acceptance to the next level, says Mr Yeo.