Pistol-packing grannies inspire and empower a new generation of girls ready to aim higher in life. Story and photos

Led by a pair of elderly housewives, hundreds of girls in a region of northern India notorious for honour killings and bias against girl children have thrown off their veils and picked up the gun.

No, they have not taken up arms to teach a lesson to their male oppressors, though the fact that local tough guys know who they're dealing with has made many families feel safer. Rather, their firepower is aimed at attaining glory in national and international shooting championships and obtaining government jobs.

Johri, a village located 70 kilometres northeast of Delhi and nestled in the middle of verdant sugarcane and wheat farms, is a place where women quietly tend to cattle, work on farms and perform domestic chores. But it is also known as the place that has produced at least 250 competitive women shooters in the last 15 years.

Many of these shooters have won medals in the Asian Games, Commonwealth Games and other national and international championships. More than three dozen have joined the Indian Army, airlines, Oil and Natural Gas Company (ONGC), state police and central paramilitary forces under their sports quotas.

Another 30 girls are now training on an indoor shooting range, presided over by Rajpal Singh, a retired ayurvedic doctor turned shooting coach, with sponsorship from the Sports Authority of India, on the outskirts of the village dotted with houses with large courtyards. 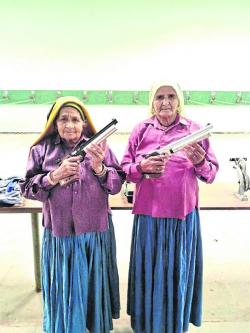 The scene today is a far cry from what a visitor would have observed just 15 years ago. Back then the shooting range in Johri functioned in an open space near a mosque and was considered a male bastion. No girl would ever go close to the range.

Chandro Tomar, then 65, was the first woman to set foot in the local range, back in 2000, when she escorted her granddaughter Shefali. Grandma ended up falling for the gun herself. This put off most members of her extended family and they would berate her for her unusual choice. "This is not an honourable thing to do for women," her elder brother-in-law Atal Singh declared.

"Don't you have shame? How can you pick up the gun?" Prakasho Tomar, Chandro's older sister-in-law by a few years, also taunted her, little knowing that a year later she herself would follow her to the range and take up the sport.

Within a few months, Chandro and Prakasho became trained shooters and started winning medals in various championships across the country. Besides Shefali, Chandro also introduced her granddaughter Puja to the sport.

In addition to being perceived as off-limits to girls, shooting was also seen as beyond the reach of ordinary villagers, an activity of the elites in India because of the use of expensive pistols, rifles and pellets. However, that did not deter the elderly pair of enthusiasts.

Prakasho also led her daughter Seema, who now works with the Indian Army, to the range, followed by granddaughters Ruby, currently a Punjab Police sub-inspector and shooting coach, and Priti. Priti and Shefali continue to participate in the national games.

In the years since she first got the shooting bug, Chandro has travelled with Rajpal Singh to Bihar, Jharkhand, Punjab, Uttar Pradesh, Rajasthan and Haryana states to set up shooting schools and train girl students there. 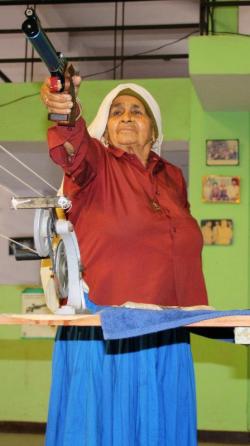 Last month, Prakasho was voted among the 100 women achievers of the country in a contest organised by the Union Ministry for Women and Child Development. President Pranab Mukherjee recently hosted a lunch to honour their contribution to nation-building and community development on the first anniversary of Beti Bachao Beti Padhao (Save the Girl Child, Educate the Girl Child), the Modi government's campaign to stop abortions of female foetuses and discrimination against women.

Chandro, who has 14 awards and trophies to her credit, also models for the campaign on national television. She still trains girls in the Johri shooting range. "What works in a sport is not age but dedication," she says, displaying her own shooting skills to Asia Focus.

At the indoor shooting range at Johri, she plunks down her chair right next to the centre of the shooting table dividing the practice range into two clear halves -- one for girls and the other for boys. "I make sure that the girls and the boys maintain a proper distance and focus on their targets," she adds.

Chandro never went to school and yet can count up to 100 and speak and understand rudimentary English words. She says she bartered with the girl shooters she trained in 2001 at Yadvindra Public School in Patiala, 227 kilometres north of Delhi. "I told the girls. 'I will teach you shooting, you teach me English,'" she recollects, rattling off words like "vegetarian", "chair", "water" and "milk".

During last summer, Rifle Association Johri which manages the shooting range in the village, organised a shooting camp for girl students. It attracted 110 students from the Government Girls Inter College Johri.

A Defence Ministry campaign that began last year to recruit female fighter pilots for the Indian Air Force has made girls in Johri hopeful that the army too might open combat roles for them sometime in the future. Two former female shooters from the Johri range -- Seema Tomar and Varsha Tomar -- are already serving in non-combat roles in the force. "Is there anything the girls do not do? They even captain ships," Chandro points out.

The popularity of shooting among girls in Johri and neighbouring villages, part of Baghpat district in Uttar Pradesh state, has given them tremendous confidence to challenge discrimination and sex crimes. Criminal gangs operating in the area avoid preying on households where women and girls practise shooting. Even shooter brides, who carry guns to their in-laws' houses as a part of the dowry from their parents, enjoy a psychological advantage.

"Nobody wants to mess with households where women know how to shoot," said Rajpal Singh, president of Rifle Association Johri, who learned precision shooting from the late Maj IG Bakalov, a four-time world champion from Russia. He has since graduated to shooting from hunting man-eating wild animals.

Chandro Tomar practises her marksmanship on a farm near Johri.

Singh says he also taught shooting to former prime minister Rajiv Gandhi, his son Rahul and Jyotiraditya Scindia, a former cabinet minister. He is currently training Rehan, the son of Gandhi scion Priyanka Gandhi Vadra. He is of the view that many politicians' offspring take up shooting to gain admission to top-tier colleges in Delhi under the sports quota rather than for the pursuit of excellence in the sport itself.

The Johri shooting range has also trained several hundred male shooters and its success has led to a proliferation of shooting clubs with at least 15 having come up in Baghpat district in recent years.

More than 300 male shooters from the region are serving in different arms of the government including defence, police and paramilitary units. Many children from the area have over the years been selected to the Boys Company of the Indian Army, considered a stepping stone to joining the army.

"Four of my students have joined the army and 20 others are training with me right now," says Kuldeep Singh, a former student of the Johri range, who runs a shooting club in his village Katha, showing off a set of expensive Swiss pistols he imported for training. Kuldeep's sister Priyanka is a member of the Delhi Police shooting team.