A bird's-eye view of Chiang Mai. Despite a slowdown in the overall housing market, some segments like single houses had a good sales rate. Thiti Wannamontha

Housing supply and demand in Chiang Mai are likely to remain weak this year despite new transport network development projects. This is due in part to lacklustre demand from local buyers in the condominium segment.

Samma Kitsin, director-general of the Real Estate Information Center (REIC), says the government's new transport networks in Chiang Mai will have a minimal impact on the property market as the projects are unlikely to be completed in the near-distant future.

The plans, linking Chiang Mai, nearby provinces and other regions, also include a strategic proposal to develop Chiang Mai as an aviation hub.

Under the master plan for fiscal years 2018-24, the Airports of Thailand Plc aims to construct a second Chiang Mai international airport with maximum capacity of 17 million passengers a year.

The Highway Department for its part is preparing to build a 184-kilometre inter-city motorway between Chiang Mai and Chiang Rai.

Passing through four northern provinces -- Chiang Mai, Chiang Rai, Lampang and Phayao -- the motorway will link up to the R3A (Asian) Highway, which connects northern Thailand with the Greater Mekong Subregion including Laos, Myanmar and China.

A feasibility study for the project was completed late last year and the department will submit a proposal to the National Economic and Social Development Board this year. If approved, construction could begin in 2020, with the motorway projected to be ready for use in 2025.

Last year, the department was allocated a budget of 600 million baht to expand the third Ring Road or Highway No. 121 to four traffic lanes from Samoeng intersection to Ton Pao intersection. The upgraded 13km stretch of road is scheduled to be completed in July 2017.

There will also be a new 21km highway from Chiang Mai to Lamphun.

The government also plans to expand the Chiang Mai-Chiang Rai Highway from two to four lanes as well as develop a logistics hub linking Lampang and Phrae to other regions.

To further integrate with neighbouring countries, the government aims to develop a so-called western gate that will connect Chiang Mai and Mae Hong Son with Myanmar and India.

A tunnel is also being constructed under Mae Jo intersection, while an expansion of the Fa Ham Bridge across the Mae Ping River from four traffic lanes to six is under way. In total, the projects have a combined budget of 1.2 billion baht and are slated to be completed in the first quarter of 2018.

"Those transport networks will not be finished in the near-distant future," says Mr Samma. "The key driver boosting the economy of Chiang Mai remains the tourism sector. Like other provinces, Chiang Mai has faced sluggish economic conditions, with agricultural prices declining since 2014."

According to the REIC, the monthly absorption rate of the low-rise housing supply in Chiang Mai declined to an average of 3.6% in the third quarter of last year, down from 5.3%.

Single houses represented 70% of the total, down from 77% in 2014. The remaining projects were in other categories, including town houses and land subplots (9% each), shophouses (7%) and duplexes (5%).

Like the low-rise housing segment, the monthly absorption rate for condos slowed last year from 7.5% in the third quarter of 2014 to 4.9%. The best sellers last year were single bedroom properties priced 3-5 million baht per unit, followed by similar, cheaper single-bedroom condos priced 1-1.5 million baht a unit.

Most of them (46 projects with 6,788 units) were located in Muang district, accounting for 89% of the total. Next was San Sai (three projects with 550 units) and Hang Dong (two projects with 179 units).

Despite a slowdown in the overall housing market in Chiang Mai, some segments such as single houses had a good sales rate, says Tritecha Tangmatitham, managing director of SET-listed developer Supalai Plc.

"Single houses and town houses in many provinces still fared quite well as demand is real. But the condo supply needs time to be absorbed as buyers include speculators as well as investors," he says.

Surachet Kongcheep, associate director of the research department at property consultant Colliers International Thailand, says the condo market has slowed in many provinces such as Chiang Mai and Khon Kaen.

With a Chinese partner, Charn Issara can expand its customer base to Chinese buyers who like visiting Chiang Mai, says chief executive Songkran Issara. He added that Tianyuan Construction Group could, for example, help put on a sales roadshow in their homeland.

Somnuek Tanthathoedtham, deputy managing director of SET-listed developer N.C. Housing Plc, says the company is also looking for an opportunity to form a joint venture with foreign investors in a condo project in Chiang Mai.

"We are talking with many potential investors including those from China and Japan, as they are interested in a condo project in Chiang Mai," he says. 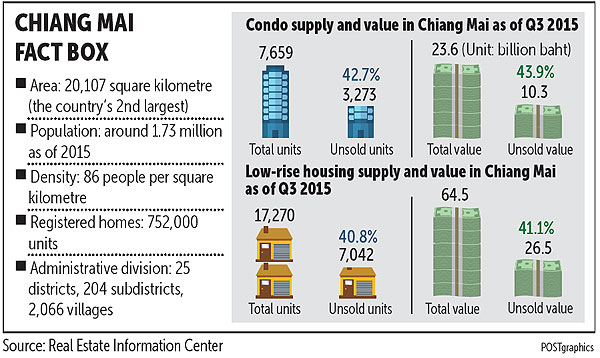