Although this coming weekend is not the second Saturday of January, it does feel like Children's Day. In fact, it's more like Children's Week, because until next Sunday, the capital is holding its first-ever Bangkok International Children's Theatre Festival (BICT 2016).

Never before has such an event featured so many international theatre companies. The festival, held at the Bangkok Art and Culture Centre, is offering eight performances from six countries; nine workshops; and forums for children, their families, and those who work with children and young people.

The festival is organised by Arts on Location, in collaboration with Democrazy Theatre Studio in partnership with the Bangkok Art and Culture Centre and the Japan Foundation Bangkok. 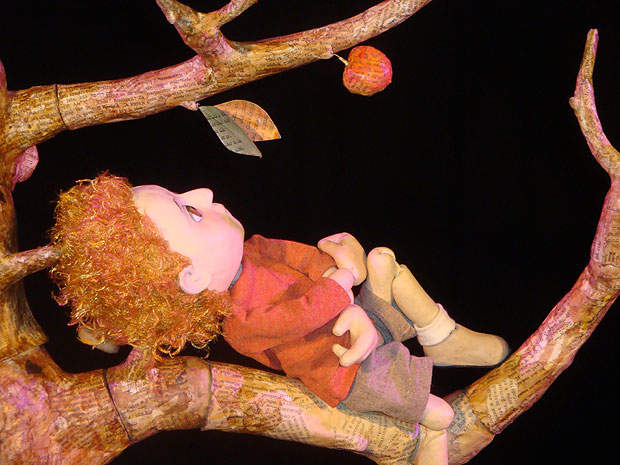 When All Was Green. Photo courtesy of BICT 2016

So what is the typical perception of a general Thai audience when it comes to the term "children's theatre"? Perhaps cute puppetry? Or simply the telling of fairy tales?

Festival director Adjjima Na Patalung, who is also the founder of theatre workshop organiser Arts on Location, said that the festival is here not to say that what we normally do -- puppetry or storytelling -- is not good, but simply to offer Thai audiences and theatre artists more possibilities when it comes to theatre-making for young kids.

The idea came up around two years ago after the experience of working as an assistant director at Theatre Rites, a UK theatre company well-known for its puppetry and site-specific performances. She was fascinated by how serious the company is in coming up with performances for children, how it's never just about storytelling to please, but the result of a long process, with the same standards one would expect from a production for adults.

"I think it's a great opportunity to do this now," said Adjjima. "The experience in theatre for kids is not only fun but also about learning how to live in society, understanding other people and other cultures."

"Some Thais think that with their lack of experience, it might be too much for children to take in complex issues," added Adjjima. "Therefore, a lot of the performances here are very much about entertainment, something easy to digest. But with these companies joining in this festival, you'll see that they've moved on much further ahead."

Adjjima explained that with a company like Theatre Rites, they believe in young children's ability to understand complex issues like racism, sex education or child abuse through the language of theatre.

What the festival means by "children" is by no means just toddlers upwards; some performances specifically welcome newborns and their parents. The dance-theatre performance AliBaBach by Companhia De Musica Teatral from Portugal, for instance, is an interactive performance suitable for everyone from babies to five-year-olds.

An interesting aspect of the festival, whether in performances or workshops, is how it strives to involve adults in the activities. For The Old Man's Books, by the Papermoon Puppet Theatre from Indonesia, for example, the group has invited 10 families to join a five-day workshop, a process which will in the end turn into a performance. The workshop "Music immersion for parents with babies" by Helena Rodrigues of Companhia De Musica Teatral, invites parents with babies under 18 months old to find connection through music.

Aside from just participating as audience members, children are given a chance to get their hands on what they've just seen or are about to. For example, "Recycled arts for kids" by Theatre Rites; the "Integrated Puppet workshop for children" by Dr Sue Jennings, which also welcomes kids with special needs (developmental delay, behavioural difficulties, and autism); and a movement-based workshop for children by Kaiji Moriyama. And children are not the sole audience for the festival -- equal emphasis has been applied on behalf of adults, especially those working in child-related fields. These talks include "The importance of working 'Larger Than Life' in puppet work with children" by Dr Sue Jennings, and "Arts for infancy: variations on the themes of 'baby drama' and on 'immersive' training of professionals" by Helena Rodrigues, etc.

"Theatre allows for the development of an individual within the proximity of a community," said Adjjima. "Unlike, say, watching TV at home alone, the learning experience in theatre is live and this sensorial experience has the capacity to help children develop physically, emotionally and intellectually."

For more information on the performances, workshops and talks, visit www.bictfest.com or Facebook: BICT FEST. Ticket prices vary. For reservations, please call 081-441-5718 or 099-009-3172, or email info@bictfest.com.

♦ Object theatre by Theatre Rites about two excavators searching for treasures hidden among a world of rubbish.

♦ An interactive performance by Companhia de Música Teatral that invites children, infants and their caregivers to take the guiding hand of J.S. Bach and enter the world of music, dance and theatre. The audience is separated into two groups. A for babies under two years accompanied by up to two adults/caregivers, and B for kids from two to five years accompanied by up to two adults/caregivers.

When All Was Green

♦ Israeli The Key Theatre's puppetry show about a boy and a tree, about childhood and adolescence, about greed and a green bud of hope.

The Adventure of Yoo Dee

♦ B-floor Theatre's movement-based, object/shadow puppet show about the most unfortunate child in the world, who follows the brightest star to find a missing loved one.