Sense behind the madness

One is either enthralled, frustrated or confused by Apichatpong Weerasethakul's films. It's possibly a reflex of a complex and conflicting emotion -- you are not sure whether it's yourself as an audience or Apichatpong as a filmmaker that inspire those reactions.

Like why, in his 2004 film Tropical Malady, does the romance of two men suddenly turn into a mysterious tale of a soldier lost in the woods? Or what does he expect us to see in the deliberately prolonged shots of quiet rural landscape which are so predominant in his oeuvre?

Things are slightly different in "The Serenity Of Madness", the internationally-celebrated filmmaker's first ever retrospective of gallery pieces which just opened last weekend as an inaugural show of Maiiam Museum of Contemporary Art in Chiang Mai, as he is presented here not as a filmmaker, but a visual artist, an alter ego which is at once separate from and integral to his filmmaking.

Towering over visitors inside the museum now is a gigantic photograph of an Isan teenager wearing a ghost mask, topped with a pair of shades.

"Let this boy be the witness to this," said Apichatpong of the work which is entitled Ghost Teen during an opening speech last Sunday. Yet, anyone who has seen his films will know that such a character plays a far more active and profound role than that. The boy epitomises the essence in Apichatpong's oeuvre which many have come to love -- whether it's the use of non-actor nobodies as his lead characters, the tales of ghosts and reincarnation or the people of the present generation haunted by the past. 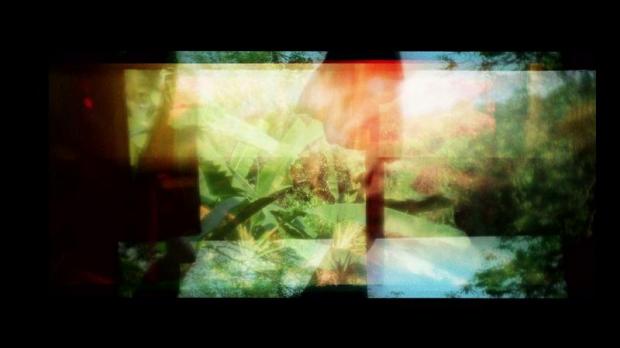 Curated by Gridthiya Gaweewong and co-organised by the Independent Curators International, the show, which will later travel to other countries, features those very subjects. Along with drawing and photography, most of the 17 video works at Maiiam -- the earliest one dates back to 1994 when Apichatpong was still studying film in Chicago -- have never been shown in Thailand before.

One way of looking at the show is as a chronological documentation which sees the filmmaker's career development. Displayed in the hallway are Apichatpong's reference materials, productions and scripts of his past films like Mysterious Object At Noon or Blissfully Yours. Likewise, a number of video works inside the exhibition -- Video Diary: Haiku Or Phantom Of Nabua -- are part of the "Primitive" project which serves as a study for his Palme d'Or-winning film Uncle Boonmee Who Can Recall His Past Lives.

Walking inside the exhibition, however, the non-linear set-up of the works feels more like a trip from one of Apichatpong's obsessions as a storyteller to another -- the traumatic political history, the possibility of reincarnation, the presence of spirits, the persistence of folk tales, the nature of sexuality, etc. From one dimly-lit gallery to another, these short video works are installed close to one another, their lights and sounds intermingled, and there's good ground why "madness" is the keyword in the show.

One video work, Sakda (Rousseau), shows a man doing a monologue on romance and the idea of reincarnation with the same awkward earnestness as we have found in many of his films. Placed next to that, for some reason, is a video work featuring red silhouettes of dogs moving listlessly.

Further inside, dialogues continue, sometimes with the clash of lights and sounds and other times with thematic similarities. While works like Windows or Ashes are chiefly an experimentation on his medium, Apichatpong's use of video as his tool proves most poignant when the technique is instrumental to the story he wants to tell. In Vampire (Sud Vikal) or Fireworks (Archive), for example, the spare use of light playfully serves as an attempt to uncover the truth and at the same time to mystify even further myths and folktales. 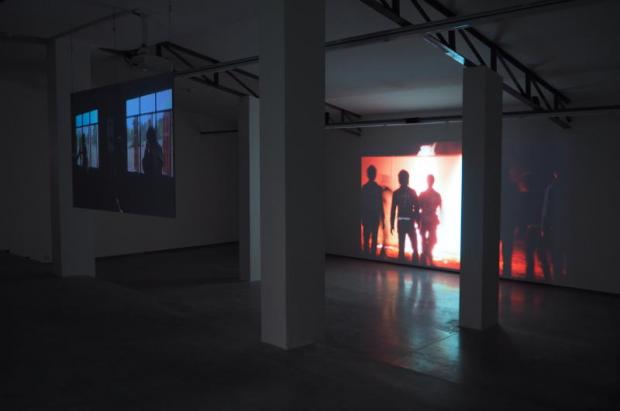 An Evening Shoot (left) and Phantom Of Nabua. Photo by Passapak Klomsakul

Along with Apichatpong's rise to fame internationally more than a decade ago came the irony that Thai audiences are the only ones who don't often get to see his works, the most recent case being Cemetery Of Splendour. In case of his video works, his "Primitive" series, comprising of seven videos, was completed in 2009 and has been shown extensively abroad and it is only now that we get to see some of the pieces from the series.

One of these is An Evening Shoot. It shows a group of men in military uniform who suddenly start shooting down an innocent-looking man walking in the field with their assault rifles. Even though the story references an Isan village of Nabua where from the 1960s to early 1980s was a zone of political violence with the war on communism, such barbaric treatment of the armed authorities towards the innocent citizen still feels relevant today.

Set in a gallery space, the obvious difference about Apichatpong's works is how there's no longer an obligation to remain seated throughout, like in the cinema. At times we encounter the works when they are already halfway through, at others we are free to linger and watch the video go in a loop over and over again.

Apichatpong is clearly aware of that, and his pace doesn't often linger like it would in his films. But even if we have lost patience with one piece and move on to the next, he still has control over us. By moving back and forth in the gallery space randomly, it's as if we, viewers, were editing his footage live, and in our heads, the exhibition becomes one whole film of non-linear narrative structure just like Apichatpong would have wanted.