A circle of abstraction

Currently standing at the centre of Gallery Ver is one half of a table tennis table folded up, and it has come to embody the essence of the artist Udomsak Krisanamis's latest solo show "Paint It Black". On it are layers of gauze and circling strokes of black paint, plus a wasp's nest. The insect's lodge wasn't the artist's plan but he kept it anyway.

Concurrent is the artist's retrospective show at Chiang Mai University (CMU) Art Center, and the echo, or rather the chronological link, between the two venues could not be stronger. One of his best-known pieces shown in the northern city now, for instance, is a painting on bubble wrap. Like the wasp's nest, the material wasn't the original plan, it was just for protection when his works were being shipped before he picked it up to use.

After graduating from Chulalongkorn University, Udomsak moved to the US and studied at the Art Institute of Chicago. Ironically, he is lesser known at home compared to the international art scene where, since the mid-1990s, the artist's distinctive abstract works have begun to gain widespread recognition. His style has been compared by critics abroad to Frank Stella of the late 1960s or Brice Marden in the mid-1970s.

While abstraction is what we see up front, the thinking behind the works is always conceptual. In the retrospective show at CMU Art Center, all works on display are actually reproductions of his past works but the ratio of everything -- the canvas size or the strokes of paint -- is reduced by 1cm.

"All the paintings in this exhibition have been reconstituted, reformed by the hands of many people," wrote Rirkrit Tiravanija, who first suggested the idea of reduced-size reproduction for the retrospective to Udomsak. "This retrospective is in itself an attempt to bring into matter ideas of representation and language, and in turn, to become experience. The paintings we see here are an attempt to recollect, recall and remake images that already exist in time and space." The show takes us back as far as the 1980s, when he had one of his earliest shows. What was already predominant back then was his constant use of mundane and personal objects, and through Udomsak's rendering, their meanings were transformed.

A piece entitled Long Live Nonsenses now hung in the central exhibition room of CMU Art Center, for example, is made of noodles, wires and nails. It's a reproduced version of the piece shown at Goethe-Institut in 1989.

Going clockwise is the suggested route around the art space and viewers will see a chronological development of the artist's style. While in work like Hercules the abstract pattern is merely repeated vertical strips, in I Won't Last A Day Without You we begin to see circling strokes, the pattern which is to persist most in his later works, including the latest show at Gallery Ver.

Manager of Gallery Ver Jirat Ratthawongjirakul said that the use of circles in his work came from Udomsak's habit to circle around the words he didn't know the meanings of when he started to learn English after first moving to the US. What's common in both past works at Chiang Mai and the new set in Bangkok is how they are a result of layers of paint and mixed media which have been applied, scratched out and put on again. In a work entitled What's Your Name, for instance, we see the same circles and strips, yet on top of all that, white paint was smeared on as if to hide what has been done to the canvas previously.

Over at Gallery Ver in Bangkok, what's most striking is how the tone of the works in "Paint It Black" is significantly more subdued, as if the artist no longer wishes the viewers to notice how complex his working process has been. One massive canvas with a black background bears rows of white circles arranged in neat order. It's only when looking closely that we realise that there is layer after layer of paint and strips of gauze plastered underneath.

What's also enjoyable in "Paint It Black" is the personal aspect of it. The canvas of one painting is actually the styrofoam board which Udomsak used for putting his painting tools on in his studio, but now is put in frame as another piece of artwork. The frames for circles drawn on canvases are actually the wheels of his and his daughter's bicycles, and we realise that Udomsak's abstraction is perhaps a very straightforward narrative after all.

Visiting the retrospective and then his latest show at Gallery Ver is seeing the artist going around in circles and finally back at the very beginning of his career: a look at himself as an artist and his realisation that any object can be art if one is to ponder on it and feel deeply enough about it. 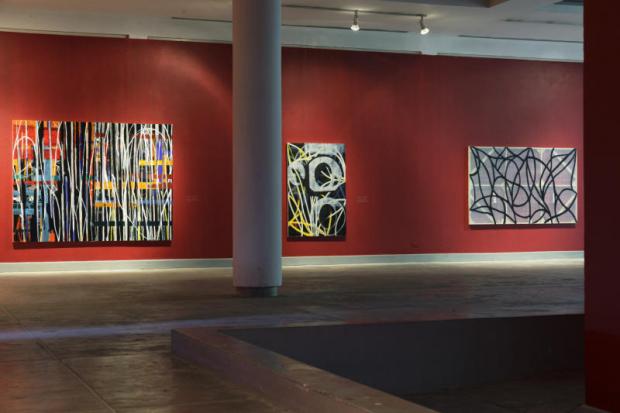