If "Fear" -- Manit Sriwanichapoom's latest photography and video show, which opened over the past weekend at H Gallery, Tang Contemporary Art and Kathmandu Photo Gallery (and at Yavuz Gallery in Singapore at the end of the month) -- isn't the hottest topic of discussion in the capital's art scene already, it soon will be.

But what kind of "hot" exactly? A glimpse of what's on display at the Kathmandu Photo Gallery: close-up, pixelated shots of five generals behind the 2014 coup; the series is titled Five Generals Who Return Happiness To The People. Full story on Manit's show at these three venues is to follow next week, and one of the questions to be discussed is to whom exactly has that "happiness" been returned?

Yet, it's not the grandness of the whole affair -- the show is being shown in "four prestigious galleries in two countries" -- but perhaps your political inclination that decides whether the show is worth a visit or not.

So where else do we go if you aren't too keen on what looks like an attempt at glorifying the PDRC movement? There are two other shows which are worth a visit, and seeing them is getting pretty much everything covered for this month's gallery hopping.

One is Sanitas Pradittasnee's solo show "Capturing The Intangible" at Chulalongkorn University's The Art Center. Some may have already known her from her outdoor art installation Khao Mo, a towering structure made of boxes of mirrors, which has long been installed at Siam Square's Park@Siam. But while that is Sanitas more or less as a landscape architect, a proper art space here has brought the potential we didn't get to see previously.

The show is basically just what the exhibition title states: to capture the intangible. Right after entering, the tone is immediately ominous and sombre. On your right is a baby crib, attached to that is a transparent balloon floating feebly. Titled Invisible Beginning, there's a pool of dry leaves in the crib with a tiny seed-shaped silver mould placed at the centre.

Next to that is Invisible Ending, a coffin whose exterior is covered completely with soil while the interior is made of mirrors. Bending down low, one sees an endless reflection of oneself, as if descending into a bottomless grave. Yet, there's also a pile of soil inside with a seedling that is just starting to grow.

With these two pieces, the intangible is obviously birth and death. The way these concepts are visualised, however, it seems that what's also equally intangible for Sanitas is the contradictory nature of these very ideas: the seeds of new life among the decay of dry leaves with the balloon that's flattening slowly and will fall one day; the coffin buried by the weight of soil but it's also that very soil that's nurturing new life.

Likewise, another series "Form Of Belief" is Sanitas' attempt to capture yet another abstract idea. Picking up the form of a Buddhist pagoda to talk about the idea of religious belief, she has come up with the form through a series of tools and techniques like frozen water, silicone and jelly, paper and clear resin.

The result is a visual feast, we watch the frozen ice melt and the jelly slowly wobble down. If the intangible is ever captured, it is probably in the mind of Sanitas as she toiled with these experimentations on her techniques and materials. This applies to viewers too: "capturing" by Sanitas' definition then is perhaps not seeing the idea actually visualised but coming up with forms that would provoke us to question the typically accepted values.

Over at Cartel, a new small art space at N22, Orawan Arunrak presents "Zones And Verbs", a collection of photographs, videos and paintings resulting from her extensive travels to Cambodia, Vietnam, Sri Lanka, Japan and the provinces of Thailand. Despite the change of subjects, there's still an echo from her previous solo show "What Are They Doing Inside?" at Speedy Grandma in 2013 that displayed close-up drawings of mundane architecture like doors and windows and other everyday objects.

One photograph shows a deserted construction site, which is actually Diamond Island (Koh Pich) in Phnom Penh, a massive real estate site to house more than 1,000 condominiums and a number of other urban development projects. In one of the video works, Orawan closely follows a group of cleaners at the Erawan Shrine who would continually put flowers people have brought for praying straight to trash.

"Zones And Verbs" is an echo from her 2013 show in the sense that it's also an intense pondering on the everyday happenings whose significance is only revealed after we learn about the history of the space or when viewers set out to explore those very locations themselves. The construction site in Phnom Penh also speaks for radical urban change in other countries in the region. The buzz at the Erawan Shrine is such a common sight yet we never take notice of these cleaners, let alone thinking about absurdity in the act of putting flowers, a symbol of faith, immediately in the trash.

"Fear" on view at H Gallery, Tang Contemporary Art and Kathmandu Photo Gallery, until Sept 10. "Capturing The Intangible" on display at The Art Center, Chulalongkorn University, until Aug 20. "Zones And Verbs" on display at Cartel, N22, Narathiwat Ratchanakharin 22 until Aug 25. Contact kaonap@bangkokpost.co.th with comments or news on art events. 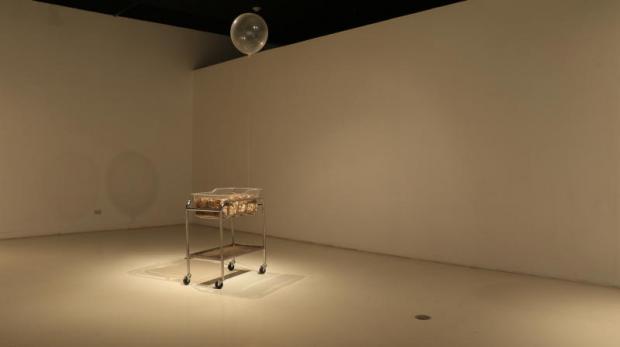