The manifestation of carnal nature and organic intuition is at the heart of New York's The Lodge exquisite exhibition "A Peculiar Nature". In an effort to capture what it is to be human, Thai artists Tawan Wattuya and Sirikul Pattachote pit raw expression and internal sensibility against one another like moves in a chess game. Wilting roses lean towards a watchful black panther ready to pounce. A cheetah readies to leap onto tulips days past their prime. The watercolour paintings complement, using the medium that seems to be threatened by extinction, somehow taking on traditional gender roles without meaning to.

The range of emotions on display is vast and volatile. One creator works at night, after pints of beer. The other picks up her brush in the morning, after a prayer, before running out the door to get to work at an architecture firm. Both are acutely aware of the parallels between human nature and the instincts of basic life forms.

The exhibition is not the first time either Thai artists have shown in New York. Tawan, along with other household names like Chatchai Puipia, Kamin Lertchaiprasert, and Kamolpan Chotvichai, exhibited in a group show at Sundaram Tagore in Chelsea in 2014, while New York-based Sirikul has steadily shown works in galleries all over the city since 2010.

Tawan has long been exposing his human subjects, often drawing them without the shield of their uniforms. In previous projects, he united the Thai art circle in a tapestry of naked bodies and recognisable faces or characteristics, turned political figures and TV personalities into monsters, melted the faces of beauty queens, and lined students in uniforms up like dark spots on a gingham. Sometimes, he ventured out of the realm of Homo sapiens and discerned human qualities in dogs, in tanks and jet planes.

"I was raised to be a dog," he says. When he paints dogs, he thinks of them as people in the guise of a dog. 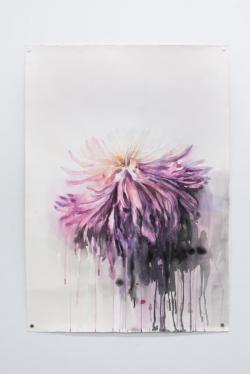 For the series shown in "A Peculiar Nature", Tawan explores other creatures in the animal kingdom. He veers from questioning appearances as a focal point but still tackles the notion of social identity with a consistently sharp irony.

Tawan began painting animals at the end of last year, first finding interest in animals we prey on, then in predators. He recalls travelling through eastern Europe during his residency in Budapest, and encountering a taxidermy display across from the National Museum in Prague, which was closed on the day he wanted to visit. When he returned to Thailand, he began painting from the photographs of stuffed animals he took there.

"Each country has its own national animal. Each zodiac has an animal sign," Tawan observes. "I'm interested in why so many countries have lions or tigers as their national animals though these beasts are not even local."

He finds contradictions in the myths and narratives people and nations build around themselves. What is it about these animals we want so much to identify with? Through his iconic brushstrokes, at once fluid and exact, the gut emerges from within the animals.

Seen axiomatically, dogs bark, tigers hunt, pigs have sex. It is as if one can only be free to behave according to its true temperament when stripped of human skin.

Sirikul draws from a different well of emotions, one marked by the shadows and trickling lines she meticulously paints. In ways that Tawan's paintings jar viewers, Sirikul makes you slow down to smell the flowers. She crystallises feelings, making her unknown known.

At first glance, Sirikul's flowers immediately bring to mind Georgia O'keeffe's personified flowers, symbols of life and death. In fact, the flowers Sirikul paints have started wilting since her father passed away three years ago.

"I paint as a morning ritual," she says, "though it's not like painting anymore, it's like a meditation. When I see flowers, I see a tool."

These flowers, she takes off the mantle where a statue of Buddha and a photograph of her late father rest. In this way, her preoccupations with samsara, with Buddhist practices, with quiet emotions translate physically on to the white paper. Sirikul titles the paintings subjectively.

In Between, a blooming flower rises in between two wilting buds. In Attraction, a blossom bends over another, as if leaning in for a kiss. The flowers hold stories within them -- drawing sadness up from the roots and retaining the pain like holding water, then letting go and fading away. 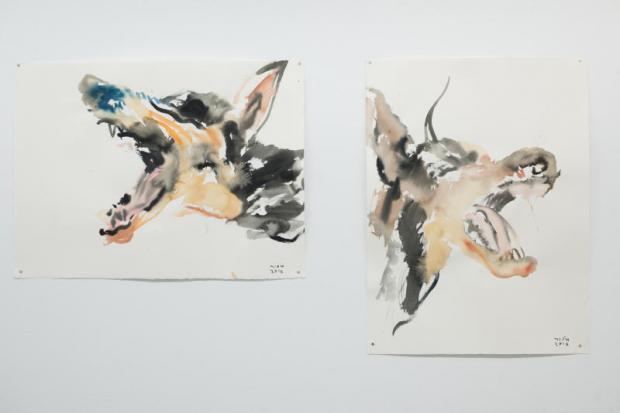