The historic old town of Songkhla is always full of life. But everything -- the people and the picturesque old neighbourhood flanked by the lake on one side and ocean on the other -- was accentuated over the past weekend.

It was the launch of the collective ABOUT ART RELATED ACTIVITIES' art and preservation project that spans six venues throughout the southern town, the highlight being an opening of Misiem's, a three-storey museum dedicated to works by Misiem Yipintsoi, a legendary Thai painter and sculptor.

The people behind the event are the late sculptor's own granddaughter Klaomard Yipintsoi and photographer Nopadon Kaosam-ang, the couple who founded ABOUT STUDIO/ABOUT CAFE, a fabled art space that was the driving force behind Bangkok's art scene from the mid-1990s to the mid-2000s, paving the way for the boom of art galleries today.

Also joining the event was Chiang Mai-based artist Navin Rawanchaikul with his usual lively old-school movie posters and music videos, which resulted from his first-hand research and interaction with people in the community.

For Klaomard and Nopadon, Songkhla was an accident; they were driving through the town for fun almost a decade ago, and fell in love with an old town house and immediately decided to buy it. The only connection Klaomard has to the province is the fact that her family's trading company once had an office in Hat Yai, a southern business hub a 40-minute drive away, and that her uncle was also a doctor there.

"We didn't know what we were going to do with the building at that point. We just loved it," said Klaomard. "We asked the construction team to come down from Bangkok and start repairing the site. It was only when we had acquired more buildings that we started thinking about coming up with some project." 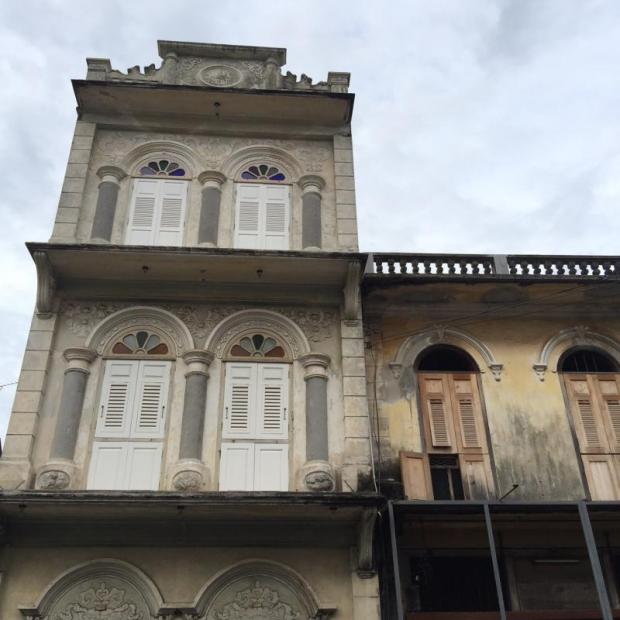 The facade of Yap Fah Mi. Photo courtesy of ABOUT ART RELATED ACTIVITIES

That first town house, named Yap Fah Woon after Klaomard's father's Chinese name, was followed by another love at first sight, then another, and another, and so on. Now, they have five buildings in total -- Yap Fah Kuang (named after her uncle), Yap Fah Mi (named after her aunt), an old rice storage house, and the site for Misiem's. These buildings -- some have been fully renovated while others are still in dilapidation -- are now open to the public on Saturdays and Sundays or by appointment until Oct 30.

"There was no other motive at the time other than the fear that these old buildings would be somehow destroyed by new developers," said Klaomard. "To me, they are worth a lot, both historically and in terms of feelings. I want the community to realise what valuable assets they have, valuable in the way that money has nothing to do with it."

Klaomard said that these buildings reflect the dynamism of the Songkhla's long history, some sites, for example, would bear Chinese-styled structures on one half of the land plot while on the other half is architecture with Western influence, and this tells a lot about the change in the community from generation to generation.

When they came across a three-storey building in the centre of town on Pattani Road, they knew right away that it should be dedicated to Misiem Yipintsoi's works.

"We have always wanted a proper place for her work," said Klaomard. "She was an inspiration, she was the person who filled our lives as children with art and we want this space to represent that."

While on the third floor there are 15 of her paintings on display, the glass room in the backyard houses six of her abstract sculptures, a rare sight as most people know of her work by its lifelike style. This is the first time the public will get to see Misiem's works again after the Misiem Sculpture Garden closed down last year after one of her best known pieces Coy Girl was stolen.

Also displayed in the space are contemporary works by artists like Charit Supaset, Chitti Kasemkitvatana, Kamin Lertchaiprasert, Pinaree Sanpitak, Rirkrit Tiravanija and Udomsak Krisanamis. The site is also where documents related to ABOUT STUDIO/ABOUT CAFE's past exhibitions are stored, waiting to be properly sorted. 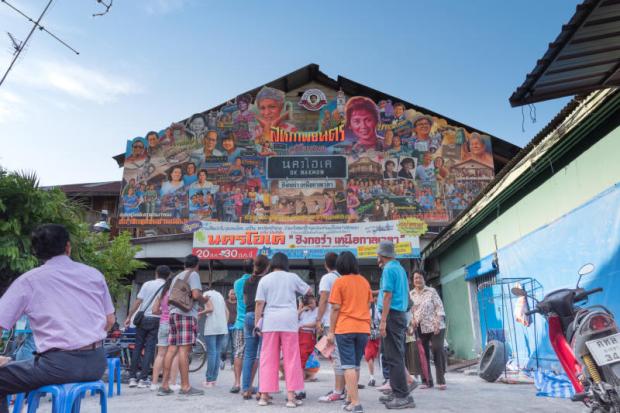 For artist Navin Rawanchaikul, it started just as a trip last year to visit Klaomard and Nopadon who are his good friends. He immediately took a liking to the community and began to think that he could start a project about it.

"My part of the project is the visual art," said Navin. "My team and I thought we could do something about it so we started researching by interviewing people in the community."

Titled "OK NAKORN -- Singora Diary", the project's highlight is a 15m-long old movie billboard-style painting, which sits over the now defunct stand-alone theatre Saha Cinema (Saha Phapayon), which was built in 1930 and stopped functioning almost 20 years ago. In the painting, ordinary people in the community were dressed and given roles as if they were movie stars.

"My visit to Songkhla made me realise how similar the town is to Chiang Mai's Warorot Market where I was born and grew up," wrote Navin in the exhibition text. "They are similar both in terms of the architecture and the way of life in the community whose population is of mixed races. That made me curious about the history of the place and want to research on ways of life of people from various generations."

Another striking similarity between Warorot Market and here is how small shophouses are gradually fading as more real estate developers come in. Navin's work is in dialogue with Klaomard and Nopadon's buildings in the way that while the latter is about highlighting the heritage in the physical sense, the former is about making people's history and stories which are fading heard and remembered again.

Navin's other exhibition site is at a former mechanical workshop that Klaomard and Nopadon renovated and now displays a large portrait painting, made up of a collage of more than 70 panels. Titled Singora Diary, each panel tells a story by community members that he encountered in his research. Also on view is a music video of a song OK Nakorn, which was written for the province and starred Navin and community members.

"I think of myself as an outsider," said Navin. "A traveller just passing by and hoping that maybe what I leave behind can be picked up by the community for further use somehow."

Misiem's, along with four other sites and an old mechanical factory where Navin's works are exhibited, are open to the public on Saturdays and Sundays or by appointment until Oct 30. n Navin's billboard painting at Saha Cinema (Saha Phapayon) is on view every day also until Oct 30. n For more information, call 090-991-0111 or email aara.projectsongkhla@gmail.com.