His Majesty King Bhumibol Adulyadej created much joy among Thais of all ages with his musical performances, broadcasts and compositions, which lasted throughout his long reign. His Majesty composed more than 48 songs, ranging from blues, jazz and popular dance tunes to patriotic anthems and New Year celebrations 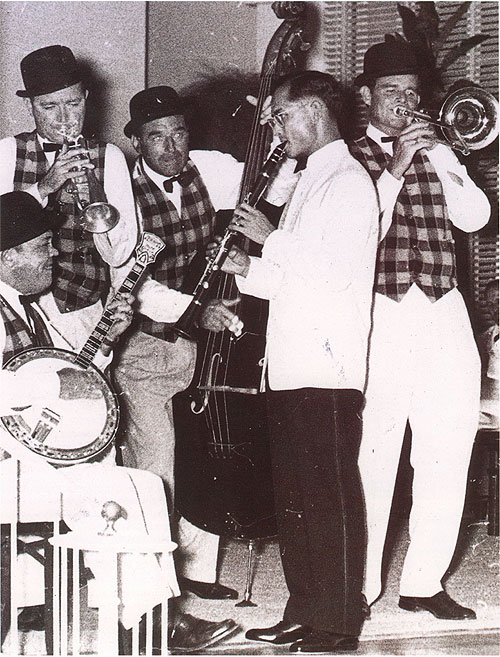 In white dinner jacket at a 1960 party given in his honour by the governor of Hawaii, the King joins a derby-hatted Dixieland jazz band in Honolulu. BKP

His Majesty's lifelong love of music began at an early age. He showed a natural aptitude for music from early childhood and in his early teens he took up music with his elder brother King Rama VIII, while both were studying in Lausanne, Switzerland. The brothers enjoyed playing music together, forming a trio with their music teacher. His Majesty's first instrument was a second-hand saxophone, and although he studied classical music on piano for several years, he showed an affinity for wind instruments, especially saxophones, trumpet and clarinet.

After studying music and learning notation, His Majesty turned his attention to the records he liked to listen to, mainly traditional Dixieland jazz and swing band music played by jazz masters like clarinettist Sydney Bechet and saxophonist Johnny Hodges, as well as swing from Benny Goodman. To further develop and hone his musical skills, he practised by playing along to the records. But he was more ambitious than just jamming to records, and by 18 he was ready to start composing songs himself; his first effort would be a 12-bar blues.

Candlelight Blues (Saeng Tien in Thai), which was composed in April 1946, was the first song His Majesty composed but was not the first released to the public; Love At Sundown (Yam Yen) written during the same period and still popular today, came out first, performed on the Public Relations Department's radio station by the Suntharaporn Band. His Majesty reportedly delayed the release of Candlelight Blues because he felt it needed further polishing. Both were well received by the public but it was the next song, Falling Rain (Saifon), a delicate, sweet waltz, that caught people's imagination. It remains one of the most popular royal tunes to this day.

Classical guitarist Hucky Eichelmann recorded two albums of His Majesty's music -- Candlelight Blues (1999) and Sweet Words (2007) -- both of which were hugely popular across the Kingdom. Eichelmann explained that he arrived in Thailand in the late 1970s and released a cassette of classical guitar versions of Thai music. His Thai friends liked the sound so much they encouraged him to record some of His Majesty's songs.

"I found that His Majesty's songs were sweet and charming in character," he said. "And they fitted perfectly with the sound of the classical guitar."

He was thrilled to receive permission to record the songs, which he subsequently performed for His Majesty and members of the Royal Family. "Having had the great opportunity to record and perform his beautiful music is the highest honour of my life," he said. The albums were phenomenally successful and they helped establish the classical guitar in the Kingdom.

As musician who has recorded His Majesty's music, Eichelmann offered some insight into why Falling Rain (Saifon) has become one of the most popular songs composed by His Majesty. He noted that the use of tremolo in the song created the feeling of listening to rainfall and was a challenge for the guitarist to get it right. "The tremolo technique is perhaps one of the best ways to create that feeling of rain falling, especially when played at that medium tempo, which is very difficult to play compared to fast tremolo."

Upon his return from his studies in Europe in 1951, His Majesty invited relatives and friends to play at his then residence, Ambara Villa. He formed a band, which was named Wong Lai Kram (The Vintage Band). A year later, the Public Relations Department gave His Majesty a radio transmitter and the band began regular live performances every Friday night; when His Majesty moved to Chitralada, the radio station, known as Aw Saw, moved there, too, where it remains to this day.

The King of Thailand's musical prowess and his willingness to play with visiting musicians was noted and word spread overseas that Thailand had a monarch who enjoyed playing music. On a state tour to the US in 1960, His Majesty entertained guests at a dinner in Hawaii by playing clarinet along with local band, Kenny Alford And His Dixie Cats, to great applause. In New York he played with some of the early "mentors" he heard on records like Benny Goodman, Jack Teagarden (trombone), Lionel Hampton (vibraphone) and Stan Getz (saxophone).

Many great musicians have played for His Majesty in Bangkok. As a keen traditional jazz fan, His Majesty often invited the Preservation Hall Jazz Band, a legendary jazz ensemble from the birthplace of jazz, New Orleans, to perform in Bangkok. Veteran clarinettist Charlie Gabriel said on a trip a few years ago that he was always delighted to perform for His Majesty because he said the King really appreciated the music the band played.

As His Majesty's reputation as a "musical monarch" grew, awards and accolades began to follow soon afterwards. In 1964, during a state visit to Austria, several of his songs were performed by Austrian orchestras and he was awarded the Certificate of Bestowal of Honorary Membership of the Academy for Music and Performing Arts in Vienna, becoming the first Asian to receive the prestigious honorary award and to have the royal cypher inscribed and displayed at the institute.

Over the years, many of His Majesty's songs and tunes have been performed by orchestras and ensembles on Broadway, in Europe and Japan. But perhaps his greatest legacy is the musical dialogue he kept with his subjects over his long reign. Music was one of His Majesty's great passions and he viewed it as an important part of life, as he wisely noted, "Music is an integral part of me, be it jazz or other kinds. Indeed, music is in all of us and forms a vital part of every man's life." 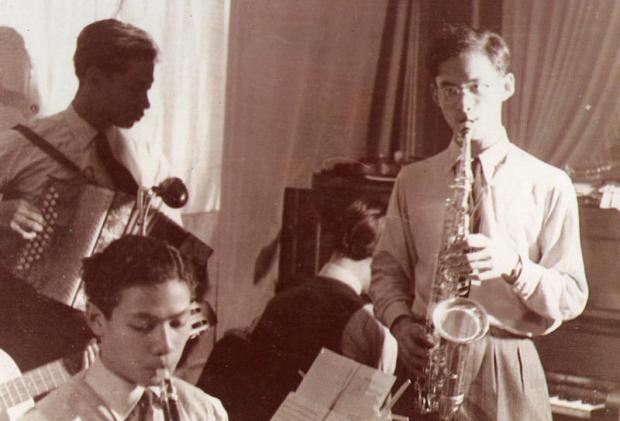