Musicians cite their favourite compositions by His Majesty

The viewpoints or the feelings of the composer are strange and difficult to describe. Those who have never composed, even musicians who play musical instruments but never compose, would not have experienced this kind of feeling. We have created the music with such and such characteristics. After that, we cannot take it back. We cannot make it disappear. If it were a painting that was painted 20 years ago, when we look at it again, we might see that the colours have peeled, that it might need some restoration. The colours may have changed, but the colours of music never change."

Born and living through the Jazz Age, the late HM the King was an accomplished musician and composer, the 48 compositions in his Royal songbook was a rich catalogue of jazzy melodies, blues-tinged melancholy and big-band exuberance. To remember His Majesty's music, we ask singers and songwriters to pick their favourite royal composition. 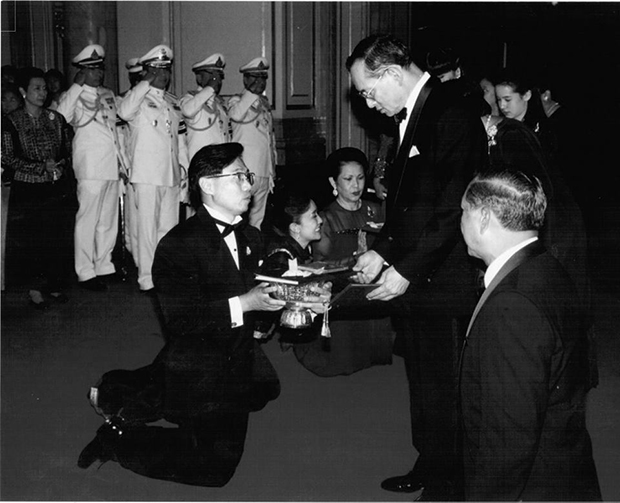 Nat Yontararak presenting the score and CD of his composition of Sonata No.1 "Glory to Our Great Kings" to His Majesty King Bhumibol Adulyadej for a special occasion of His Majesty's Golden Jubilee. (Photo courtesy of Nat Yontararak)

"There are many favourites, but if I have to pick one it's Saifon. The song has a simple and catchy melody. It has a beautiful chord progression, which can be rearranged in a number of ways and still comes out great."

"Generally speaking, songs by His Majesty are always timeless, with melody that touches you and they invoke somehow some kind of atmosphere one can almost touch and feel it. I like Saeng Tien the most because the subject he picked up is very touching; it is about karma, about doing good and about death and rebirth. It's not often that you come across such subject in Thai songs. The candle, a great metaphor for his subject, was subtly chosen. The hidden meaning is very touching and it gets me goosebumps every time I go over the lyrics."

"Echo is a song with such a beautiful chord progression. It is also one of a few songs that His Majesty composed the music, as well as wrote the lyrics. But as a classical pianist, I would like to add another song in my favourite list: The Kinari Waltz. Most royal compositions are in the tradition of jazz, but The Kinari Waltz [which His Majesty composed for a ballet in 1959] is perfect for a classical performance."

"I like be-bop a lot, and this song is in that style. Of course the music is Western, but the melody has a Thai flavour, which I believe came from His Majesty. It reminds me of Charlie Parker, Benny Goodman and other musicians from the post-war era."

"There are varieties of moods in His Majesty's compositions. I have made so far 14 arrangements of his songs for piano solo (which are used as the compulsory pieces for the Siam International Piano Competition). My favourite is Kwam Fhun An Soong Sood (The Impossible Dream). It is such a powerful music. You can feel its tremendous power when it is sung together by hundreds of thousands of people. It was an experience that we will never forget. Everyone sang their heart out. His Majesty, the sine qua non of Thailand, put the soul of the nation into this song."

"I heard a story from a musician colleague that His Majesty composed this song soon after HRH Princess Maha Chakri Sirindhorn was born. It was said that the King held the princess in one hand while composing the song on the piano with the other. For a musician, that was special. It is one thing to write a song from your inspiration, but it was another to write one from an actual experience -- holding your baby in your hand while writing a lullaby."

"Echo is a song about memory, and while I like it for a musical reason, one thing that also strikes me is the visual that you can conjure up from hearing this song. I can picture a woman, a beach, a romance. What a beautiful song. It shows that the King was such a romantic person."

"This is the song I sung in a music contest when I was in high school, and it was this contest that led me to meet the bandmates for Polycat. I think the rhythm of the song is fun, blues is the kind of music I have listened since I was young but Yam Yen was the first Thai blues I ever came across. It's a beautiful love song. It's rare that love songs these days would opt specifically for a certain time in the day as the setting, like it's in the evening for this song."