A trip to the other world
Life
Arts & Entertainment

A trip to the other world

"I have always wanted to set a story in a love motel," says writer-director Prabda Yoon. "The place has a sense of mystery, the way the rooms are next to one another but you can never know what happens there. It's great as a setting for a murder or suspense story."

You'll still never know what happens in those rooms. Prabda, one of our best-known writers and winner of the 2002 SEA Write Award for his short-story collection, has made his debut feature film, one of the most anticipated Thai movies of the year and which has toured film festivals since January. Rong Ram Tang Dao, or Motel Mist, was scheduled to hit Thai cinemas yesterday, but at the 11th hour on Wednesday night the film's investor, the cable network TrueVisions, has decided to pull it off the screen to the dismay of the filmmaker and his team. 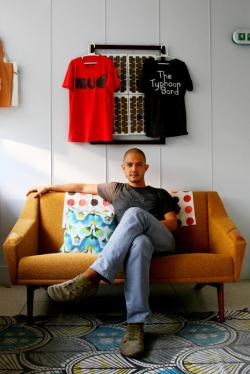 The film's Facebook page cites "disagreement between the filmmaking team and the investor regarding the content of the film". A representative of TrueVisions told the Bangkok Post that it "didn't ban the film, but [is postponing] the release indefinitely for more appropriate timing". This despite Motel Mist having passed the infamous censorship board with an 18-plus rating, a liberal decision given the film's sexual content, and despite a packed press screening at Scala Theatre on Tuesday as well as earlier advertisement to draw people's attention.

It is believed that TrueVisions only saw the film on Tuesday and decided that it was not to their liking. The "postpone indefinitely" decision, which is entirely its right, has deprived Prabda's fans -- and there are many -- as well as the audience from seeing one of the year's most unusual cinematic visions on the big screen. TrueVisions also isn't sure when the film will be screened on its channel.

Ahead of the premiere and the shocking cancellation, Prabda, 42, talks about his transformation from writer to filmmaker, the different stimulus brought by text and visuals, and the inevitable compromise a director has to make when a script becomes a movie.

The Thai title of Motel Mist, Rong Ram Tang Dao, means "alien motel". "I was thinking about something impenetrable, something abstract," said Prabda. "It's not 'alien' in the Hollywood sense, but more like 'alienation', something you can't totally grasp, a mysterious force. Partly, it refers to the situation in Thailand as well."

Interpretation is welcome, says Prabda. Early in the film, a middle-aged man takes a young woman to a motel in his classic Mercedes, and we see the Democracy Monument reflected in a rear-view mirror. Once settled in the room, the man reveals his fascistic tendency, a leering oppressor in a kinky Hitler overcoat and a taste for whisky and classical music. The young women -- there are now two -- hired to be part of the sex game at first play the victims before getting up and rebelling.

"I guess it's in the back of everyone's mind," says Prabda, referring to the situation of the past two years. "Or going back further, say five to 10 years, what has happened politically and socially, the social divide and the estrangement, must have an influence on the way artists express themselves.

"But I'm not a political worker. I talk about the things in my head through the means I know best, in books and now in a movie. It's more abstract, it's not direct."

Prabda's books were the rage of literary Bangkok at the turn of the millennium. Muang Mumchak (City Of Right-Angles), Utokapai Nai Duangta (Flood In The Eyes), and the SEA Write-winning Kwam Na Ja Pen (Probability) are some of the short-story collections that made him a star of Thai letters, a new voice breathing fresh air with his somewhat experimental style, gymnastic prose and oddball characters, mostly contemporary people stuck in the void of modernity. Motel Mist may be his first outing as writer/director, but Prabda has written for the screen before, notably for the independent filmmakers of the early 2000s, including the script of Kuen Rai Ngao (One Night Husband, 2003) directed by Pimpaka Towira, and Kampipaksa Khong Mahasamut (Invisible Waves, 2006) directed by Pen-ek Ratanaruang.

Before his career in Thai publishing, Prabda studied graphic art in New York. As a student, he said, he was more into film than literature. And now, even though he's an established writer -- his stories have been translated into Japanese and English -- Prabda still finds the emotional rush from movies more satisfying than the simmering plunge of books. Movies, he says, "move you stronger and [are] more spontaneous" while literature demands time before it "sinks into your memory".

He prefers films that are driven by dialogue -- he mentions Quentin Tarantino -- or those that have the feel of theatre, such as the recent work of Roman Polanski.

The latest book he's read? Michel Houellebecq's Submission -- a polemical French novel about Islam and France -- and he's not even that impressed. And film? "Elle, the rape-revenge fantasy. It was cool."

"I respond to text and visuals perhaps in equal measure," he adds. "But at this point I feel comfortable with text and it feels more exciting to work in visuals. I consider myself a newbie in filmmaking, but that makes me curious. I want to know how this thing works."

Prabda talked about how a filmmaker has to prepare to make compromises on the set, how his vision -- which he has total control of when putting thoughts into words -- has to face daily obstacles on the set when translated into pictures through a number of other people. "I have no problem making compromises as long as the core vision remains intact," he said.

Now the shock cancellation has become the compromise he least expected. To audiences in Thailand, Motel Mist will remain a mystery, something cloaked by an unlikely mist that descended over a daring artistic invasion in the final hours.