Tada Hengsapkul focuses on the naked to ponder what lies beneath

One wonders how that is possible, and that's probably the reason why viewers have fallen in love with the 29-year-old artist's new set of images, which will be on display until Feb 19 at Gallery Seescape in Chiang Mai.

Curated by Kittima Chareeprasit, one of Thailand's few emerging curators, the show is the outcome of Tada's one-month residency in the northern city. He was enchanted by the ballroom dance hall at Ratanakosin Hotel and from there on, things developed more or less through improvisation.

Tada asked complete strangers to join the project and spent time getting to know them. Whether it's a shot of two guys about to high-five one another, a girl in the corner of the ballroom filling her plate with food, or all participants huddling together, it's the conversation with his models that drove him to shoot the way he did.

In a recent interview with Life, Tada talked more about the process of coming up with the show and why nude photography still matters.

How did the idea for the exhibition come about?

Back in 2011, I did a series called 'Tong & Note' for which I took photos of two complete strangers, a man and a woman, naked and blindfolded. I was inspired during the brief time I was a monk. My mentor taught me that a matter of sexuality is completely separated from that of religion, and that led me to ponder about what exactly is the relationship between humans and sex. Last year, my curator Kittima Chareeprasit invited me for a residency in Chiang Mai for a month and she suggested I take the idea behind 'Tong & Note' a bit further.

Tell us about the one month you were there, what did you do?

Being in a residency, I must make some sort of connection to the place. I was like a stranger coming in to observe things. For a while I was wondering how I could really blend into the spaces and I started reading local newspapers. What I found very often is the ads for a ballroom dance club at Ratanakosin Hotel. I went there myself and felt the sense of mystery both towards the activity and the space. This work is a lot of aspects found there put together into one piece.

In your recent duo exhibition 'Under The Same Sky' at Nova Contemporary, there was a long process of exploring the space through an interaction with the people there. It's the same case for this show, what do you find interesting about it?​

I love seeing things unfold in front of my eyes. Every time I explore a new space, there's this rush of adrenalin in my body, my mind is awake and you get to learn a lot of things hidden under. This particular process allows you to understand the diversity and complexity of human beings from a much clearer perspective.

Can you tell us a little bit about the experience of working with these nude models?

I put ads in local newspapers and also posted on Facebook, calling people to join the project. For the casting, I had this same set of questionnaires asking the models various random questions, from their favourite colour, their sexuality, their preferred sexual position, to their history of drug use, etc. It was very much an improvisation and the information I got came to lead how I did my photography. What's interesting is the reason everyone wanted to join is because they felt bored with life and wanted something different, and modelling nude could be the answer to what they were looking for.

What's the fascination with nude bodies?

I have fallen in love with the language of human bodies. Bodies are more interesting than objects because there are also the minds that are hidden under, and their complexity shifts according to time, place and culture. This set of work is different from my previous shows because there's the aspect of space, which has added meaning to the work. This is also the first time I did nude photography with as many as eight people who are complete strangers, whereas before, I would only do it with my own friends.

"The Things That Take Us Apart" is on display until Feb 19 at Gallery Seescape, Chiang Mai. 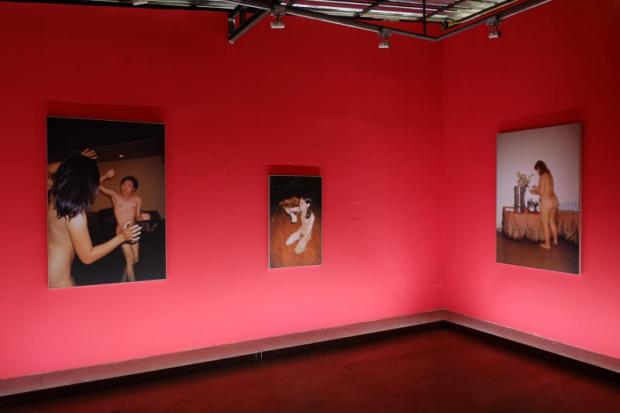