Beyond the grave
Life
Arts & Entertainment

At the 45th National Book Fair at Sirikit Convention Centre, one of the highlights lays beyond new book launches and big sales. It's the fair's main exhibition that revisits one of Thailand's unique publishing traditions: funeral books.

Once normal practice though less frequent these days, funeral books, or cremation books, are given out by the families of the deceased. Souvenirs to attendees, these books can cover everything -- cooking recipes, historiography, Buddhist prayers, and of course affectionate testimonies or eulogies to the person who passed away. These funeral books have served as a Thai way for commemorating deaths for generations. They are often overlooked, though, as once given, they often remain tucked away in one's cupboard to collect dust.

The exhibition at the book fair, titled "Books For Remembrance Of Funerals: Cultural Heritage Of The Nation", aims to inspire a sense of appreciation for these souvenirs, by connecting the value of funeral books given out by the royal family to the preservation of Thai heritage. 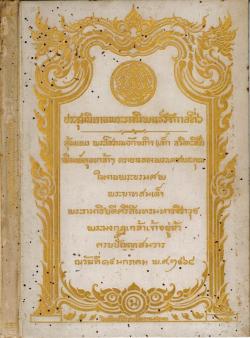 According to Charun Homtientong, president of the Publishers and Booksellers Association of Thailand (PUBAT), Thailand is entering its 138th year of publishing funeral books. He added that the first royal funeral book was published in 1880, when Thailand was under the reign of King Chulalongkorn, or Rama V. A funeral book was issued to commemorate the death of the monarch's first wife, Queen Sunandha Kumariratana, who lost her life after her boat capsized on her way to the Bang Pa-In Royal Palace. She was with-child at the time of her unfortunate death.

After Queen Sunandha's funeral book -- which Prince Damrong, King Chulalongkorn's brother, is said to have composed -- the trend of publishing funeral books gradually became popularised among royalty and other members of the elite.

Through the years, the contents of royal funeral books have changed according to the era in which they were conceived. Kanok-on Sakdadate, director of the National Library of Thailand, organised the royal funeral book exhibition for the public, with the intent of exposing people to the beauty of these books.

"Thai funeral books are unique," she said. "These books can be considered national treasures, because through them, we are given a chance to trace back history."

According to Kanok-on, many of these books contain historical documents, literature, Buddhists prayers, and even the favourite recipes of Thailand's late members of the elite and royal family. She further added that at the book fair, these funeral books will be available for digital download via QR Code, as public domain, with no added charges.

Rachanee Supvichitr, an experienced bibliographer with many compilations on the Chakri Dynasty, says that many of the books on display are authentic, first-editions of their kind. She also believes in the funeral books' ability to metaphorically transport readers back in time. 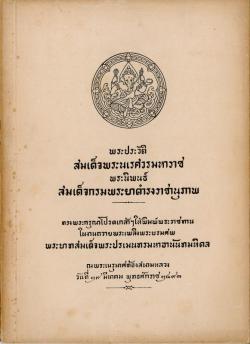 "If you read the funeral book of a government officer from a specific time, you will definitely get an idea of what it was like there," she said. "You'll learn about all the surroundings of that specific era."

To collectors and academics, cremation books are more than just an eccentric memento of the departed. In many cases, historians and researchers treasure them for information, treating them as honest chronicles for the past. Chefs and housewives look to them for ancient recipes (the well-known Australian chef David Thompson reportedly studied Thai cuisine from recipes in cremation books). At the same time, antique booksellers can make a fortune out of them. The price of this genre is high enough that sellers often go to cremations of the famous to get free books, later to be sold at inflated prices.

Cremation books have secured the attention of overseas academic institutes. Cornell University, Northern Illinois University, the National Library of Australia and Kyoto University reportedly all have valuable collections. For foreign scholars, cremation books are unique cultural artefacts, as they only exist in Thailand.

As the exhibition's name suggests, "Books For Remembrance Of Funerals: Cultural Heritage Of The Nation" will be a fixture at this year's National Book Fair. These funeral books will also inspire people to view books from a new perspective, according to Kanok-on.

"Through these books, you can see that death does not only bring grief and loss," she said. "In society, it possesses the ability to mould people, as well."