A region in flux

What do four contemporary artists from three other Southeast Asian countries have that could resonate in a country like Thailand?

Turns out, a whole lot.

From aesthetics, to spiritual beliefs, to societal struggles, Jim Thompson Art Center's latest group exhibition, "People, Money, Ghosts (Movement As Metaphor)", depicts the continual change that the region is going through, and shows that we and our neighbouring countries aren't so different after all.

Life talked to curator Roger Nelson to understand more about the artists and their works.

Circling through the dim gallery for the first time is an eerie but intriguing experience. From the thatched house filled with colourful photoshopped portraits, to floating heads projecting images of everyday modern life on the floor, to a video of a naked man covered in white liquid walking through different rural scenes, it's a cerebral and meditative experience, possibly leaving some with a looming question mark over their heads.

But taking the time -- at least an hour -- to soak in all of the projects, each artist has something extremely profound to say that's specific to their country, but at the same time hitting so close to Thailand as well. Their struggles, in the end, are our struggles.

"The most important thing that links these artists' working methods is their commitment to research," said Roger Nelson, who curated the exhibition. Nelson, based in Phnom Penh, is an art historian and independent curator.

"Their artistic practice is a form of research, and for each of these artists, the exhibited objects are derived from a long process of reading, listening and exploring in order to deeply investigate the issues at hand."

Khway Samnang based in Phnom Penh

First artist Khway Samnang investigated change and social issues within his own Cambodian context. His quiet but pensive video performance, Rubber Man (2014), explores the effects of Cambodia's rubber plantations on the environment and local communities -- some of which have been displaced and destroyed due to the increasing amount of foreign-owned plantations in the area. The video sees the artist dousing white rubber sap onto his naked body, then treading through rubber plantations, deforested lands and a rural red-soil village in the remote northeast province of Ratanakiri. To emphasise the message even further, placed on the floor in front of the video is a circular patch of red soil with wooden sculptures of local wildlife and power tools. The red soil, for this exhibition, was actually taken from the Isan region in Thailand, linking the two countries aesthetically, geographically and socially.

His other project, Yantra Man (2015), explores the forgotten history of Cambodian soldiers who fought in World War I for the French. The metal sculpture installation, which is in fact a suit of armour, lies outside Rubber Man's screening room, filled with amulets and Yantra designs, which also has strong links to Thai culture.

"The Khmer yantra is in fact, more popular in Thailand than it is in Cambodia," explained Nelson. "And the Khmer lettering that adorns it in fact spells out works in Pali, an ancient language that provides the common root for many words in both Khmer and Thai." 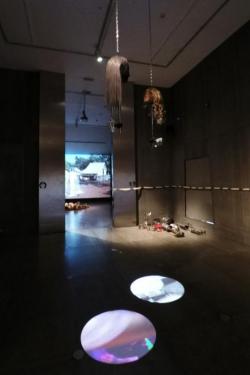 Amy Lien and Enzo Camacho's hanging head sculptures (what they call a "video sculpture") also deals heavily on the issues of the region's fast paced change through an unexpected but impressive use of symbolism.

Hanging on the gallery ceiling are three eerie floating ceramic heads donned in wigs, and projected on the floor below each head are videos akin to fashion shoots, intercut with footage from malls, to gay bars to nightclubs generic to any Southeast Asian country.

The artists researched extensively on a self-segmenting ghost widely known throughout Southeast Asia. In the Philippines, it's the manananggal, in Cambodia it's the arb and in Thailand it's the Thai krasue. They then put the iconic creature into a much more contemporary, symbolic and deeper context.

"This work was created by the artists especially for this exhibition," said Nelson. "And I was able to work closely with them throughout the process. The artist combined these [ghosts] together to create their own kind of version: they call it an 'open sourced monster'. These ghosts are very traditional and historic, but for Amy and Enzo, they are also very contemporary, in the sense that they function as symbols of the contemporary conditions of a migratory existence, perpetual roving, a shifting sense of self, and so on."

The ghosts ultimately personify movement and change, and what's "haunting" to the artists is this change, especially in urban environments across the Southeast Asian region. It raises questions as well, to where this region will go in the future as development ceases to stop.

Saving the best for last, Nguyen Thi Thanh Mai's artworks seem the most sincere out of the whole exhibition. Her project, through different mediums, heavily explores stateless Vietnamese communities in both Cambodia and Vietnam. Empathy seeps from each piece of work, which sheds light on the prejudice, poverty and complexity of what people in these communities have to endure.

Her hour long video Day By Day (2014-2017) is worth the watch as the rest of her works -- the thatched hut, fake ID cards and altered photographs -- are linked directly to it. The documentary is a beautifully shot, charming, but tragic look into the lives of these migrants, giving them a voice for the rest of the world to hear and understand their hardships.

"Mai first encountered these communities almost by accident when travelling as part of a residency in Phnom Penh," said Nelson. "Staying in the capital city, she was increasingly aware of the widespread prejudice against Vietnamese people and the perception that Vietnamese migrants were all being lavishly catered for by the government. When she came to the Chong Kneas village on the Tonle Sap lake in Siem Reap province, she was first shocked by the poverty of the community. After spending time listening to their stories, she gradually began to understand the complexities of the issues they faced."

She continued reaching out to these communities for over a year, building trust and monologues between each family.

"Some villagers have no ID because it was lost or destroyed during the Khmer Rouge regime, others simply can't afford it," said Nelson. "Every family has a different story. After filming, editing was another very time-consuming process. Mai wanted to retain the dreamy, hypnotic, otherworldly quality of the floating villages, while also ensuring that the villagers themselves got to speak as much as possible, sharing their often very different stories of living without an ID."

Both the Cambodian and the Vietnamese governments refuse to recognise these people as their citizens. And through Mai's works, guests can hopefully learn to empathise with their fellow human beings in an ever increasingly walled-off world.

"They are facing a similar legal predicament to those most infamously being endured by the Rohingya people of Myanmar," Nelson said. "Most regretfully, it's hard to imagine how Mai's work in exposing their plight could bring them any meaningful help."

The rest of Mai's works are packed full of compassion, like inside the thatched hut, which probably hangs some of the most heartbreaking artworks of all.

"These are digital collages made by travelling salespeople who pass through the area," explained Nelson. "They just photograph the heads of the villagers and digitally superimpose the onto the body of a stranger, who is then digitally inserted onto a background from a range of images."

Finding the images in every hut, Mai decided to commission the salesperson specially for the families that she spent the most time with. And instead of letting them choose from the select range of images, she asked them to imagine where they'd like to go.

"Many of them have never seen the ocean, and thus chose images of the beach," said Nelson.

"Others had never had a proper marriage ceremony due to lack of legal identification, and thus chose to digitally dress themselves up and produce images of the wedding they never had. These images are thus ghostly, headless figures, floating eerily in digital space -- but also dreamy, embodying the hopes and imagination of the people depicted.

"I hope the exhibition inspires visitors to consider some ways in which cultures can be understood as dynamic, shifting, moving and in flux. And also consider ways in which meaning is also not fixed but formed in a network of ever-changing relationships, moving between different locations, different ideas, knowledge systems, experiences and processes.

"I think that a sense of identity that identifies commonalities with others, rather than differences, is generally positive. Nationalism has been a force of terrible destruction in Southeast Asia, as elsewhere, and like many others, I fear that we are now re-entering a phase of extreme nationalism and attendant extreme dangers of humanity, especially for the most vulnerable."

"People, Money, Ghosts (Movement As Metaphor)" is on view until June 18 at Jim Thompson Art Center. 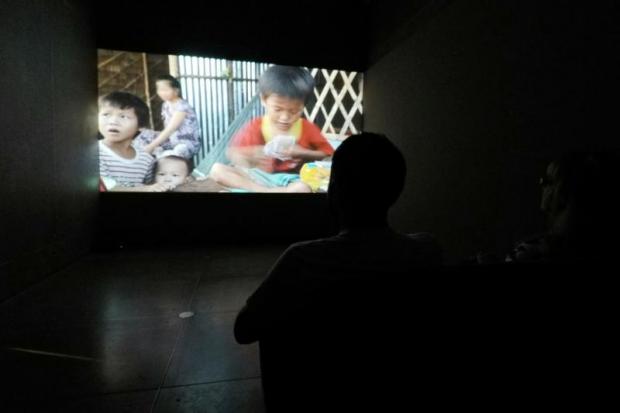