Sounds of the Hmong

An ethnomusicologist makes sure the world doesn't forget

Chiang Mai archivist and musician Victoria Vorreiter published a book on tribal music, Songs Of Memory: Traditional Music Of The Golden Triangle, in 2009. Since then she has been busy travelling, researching and recording music from the tribal peoples of the mountains, and for the past six years her focus has been on Hmong music, mainly from tribal groups living in Thailand and Laos. 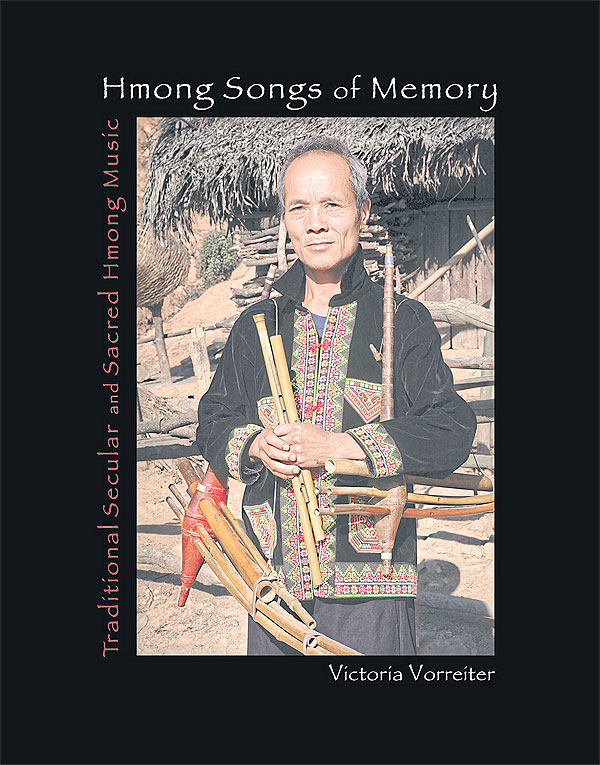 The result of her latest research is a fascinating book, Hmong Songs Of Memory: Traditional Secular And Sacred Hmong Music, which, like the first book, is published by her own publishing house, Resonance Press.

Vorrieter explains that the Hmoob (Hmong) are a major ethnic group in Southwest China and Southeast Asia, and likely originated in Siberia and Mongolia before moving south to eventually settle in what are now the highlands of Henan, Hubei and Hunan provinces in China. Pressure from the Eastern Han Dynasty forced them to move further south to Yunnan, Guizhou and Sichuan, where most Hmong live today. Other groups continued journeying further south, settling in northern Vietnam, Laos, Thailand and Myanmar.

The Hmong language has four major dialects, each named after the dominant colour in their beautifully woven costumes; however, the author says that there are ritual and musical commonalties among all the Hmong subgroups. As Hmong is a tonal language, instruments -- mouth harp, leaf, flutes and reeds -- are played to express and communicate lyrics, as, says Vorreiter, "[the instruments] are all able to replicate the patterns, contours and sensibility of language to a remarkable degree".

The book is divided into two major parts: "Secular Music" and "Sacred Music". In the first part, the most important instruments are introduced (and many are beautifully photographed). Thus, the reader can find out about the wonderfully expressive Ncas bronze mouth harp, the Raj Ntsaws, a side-blown bamboo flute, the delicate Raj Lev Les folk clarinet, and, my favourite, the organ-like Rab Qeej, a set of free reed pipes (based on the same principles as the Lao khaen or the Chinese sheng).

The book comes with a documentary film on DVD, which shows Hmong villagers performing and dancing. The Rab Qeej, for instance, involves the performer playing while dancing to complicated steps. The author explains that this instrument was also used as a kind of martial art, to train young men. To learn this instrument, young players get simple sounds and steps to learn and then progressively increase the tempo and types of steps as they develop on their instrument.

It seems that the Hmong like ballads, and there are many love songs sung when young people are courting. One game involves throwing a papaya between teenage boys and girls while singing poetic verse. I have to say that this looked like a lot of fun on the DVD. One neat thing about the songs is that they have transcriptions of the lyrics in Hmong and their translations in English. While you're watching the DVD, a number will appear next to a song corresponding to the lyrics in the book. Nice idea.

The second part of the book, "Sacred Music", introduces one of the main subjects: the story of Rhiav Lis, a granny, herbalist and shaman who performs rituals to cure such ills as feverish babies. Her ceremony to heal her grandson, Cas Koos, is covered in great detail, and the background to this ceremony -- Hmong shamanism, pantheon of spirits and the Hmong cosmology -- provide social and cultural context. Cas Koos, a sickly baby, has, the author reports, now grown into a healthy boy.

There are many reports on how tribal cultures and their languages and music are fast disappearing as their habitats are destroyed by modernity and encroachment, and, in the case of the Hmong, young people migrate from the mountains to the cities. So it is important that as much can be preserved and recorded, and the author is to be commended for her determination to make sure that some of this precious culture is not lost forever. Vorreiter says that little can be done to stop modernisation, which is a depressing thought, although Rhiav Lis does try to pass on her herbal knowledge to young women in her village.

The author says that her work serves as a reminder of the "extraordinary cultural heritage the Hmong have developed and sustained since time immemorial", and this book certainly offers a window into the fascinating world of traditional secular and sacred Hmong music.

A multimedia exhibition, "Hmong Songs Of Memory, Hmong Threads Of Life", runs at the Tamarind Village, Chiang Mai, until May.