Hanging politics on the wall

Three years after the coup, three leading artists reflect on the way art has become the final frontier of political expression

Art and artists aren't as detached from worldly matters as many like to think. In the past couple of years, contemporary artists have undoubtedly given form to some of the most daring and powerful expressions of our collective feelings of angst, unrest and hope -- while increasingly becoming aware of, and subject to, the restrictions on freedoms that are in place.

As we recently passed the third anniversary of the 2014 military coup, Life asked three artists on their viewpoints and how they work under the ruling junta.

A theatre production whose works underline freedom of speech.

The B-Floor Theatre production Bang La-Merd led to an interesting case of life imitating art (that in turn imitates life), when it was restaged in 2015 at Thonglor Art Space.

Plain-clothed military men watched over and recorded each of director and actress Ornanong Thaisriwong's performances, transposing the play -- translated to Area Of Violation -- into reality.

The coup and the three years that have followed have given artists many more topics to explore, said Ornanong, who stands for freedom of speech.

"The more they try to prevent us from speaking out, the more we have to keep doing so," she said. It's a way for her to show the regime that she isn't afraid, and to keep pushing for dialogue and public participation to take place.

While Ornanong originally performed Bang La-Merd: The Land I Do Not Own in 2012, she had to cut out certain passages before she was allowed by the army to restage it following the coup. 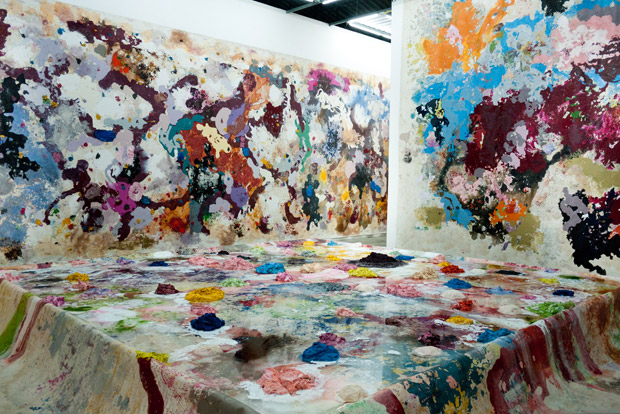 It was a tough decision to make, that of censoring herself as an artist. However, Ornanong didn't want to put her audience at risk.

"Nowadays, everything -- including the law -- is interpreted in ways that are simply absurd!" the director argued.

With legal decisions made on the spur of the moment, often to benefit the army's goals, art is particularly at risk, as it relies heavily on interpretation.

"I would never have cut those scenes out, had we performed under normal circumstances," she added.

Theatre productions these days are particularly fond of political motives and references to the country's current situation, especially among young artists.

Perhaps the young feel the effects of the coup more strongly than older generations. Or it could be, Ornanong said, that some established artists have positions and celebrated careers at stake.

As to performing in a climate of fear under the military's watch, Ornanong says she was angered at first.

"I felt that my rights were being violated. I felt violated," she stammered.

But eventually, the military's conduct reflects badly on the regime, highlighting its fears and insecurity.

At the same time, Ornanong's play sparked a debate and attracted a small crowd of supporters and curious spectators each night, despite the plummeting economy that had shrunk her audience's size.

"I think this is the most diverse audience I have seen attending one of our B-Floor productions," she added, as theatregoers were joined by human rights activists and people who had heard the news.

"Look at Pai Dao Din, he's an artist in his own right. Take Arnon Numpa, Pansak Srithep or Phayaw Akkahad -- they're holding performances in the middle of Bangkok," he added, in reference to the human rights activists' recent commemoration of the May 19, 2010 crackdown on protesters, which took the form of theatre.

Under military rule, the line between art and activism has been blurred, with more and more rights advocates resorting to artistic expression and symbolism to convey their message, while avoiding direct confrontation with authorities.

Artists, meanwhile, are looking for new ways and spaces to engage with their audience. Mit's work Junta Monochrome is an abstract explosion of colour -- a way of saying how our polychromatic society has been conditioned by cynical colour-coded politics, before all is suppressed. 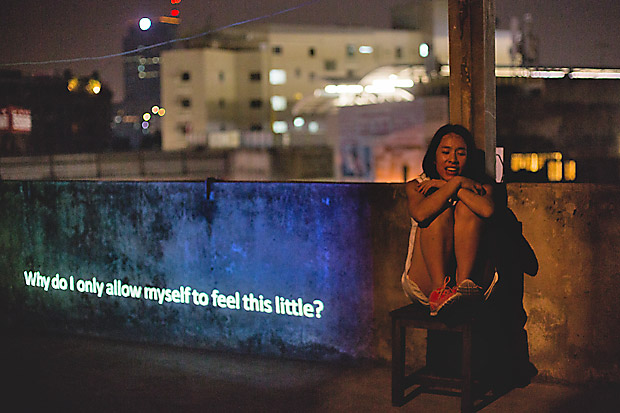 The climate of fear was both on stage and in the room during B-Floor Theatre’s performance of Bang La-Merd, monitored by soldiers. Photo courtesy of B Floor

"Activists have become artists and artists have become activists' supporters," Mit joked. However, the two are not cut from the same cloth. They may share similar visions but their purposes and methods are entirely distinct.

"We work quietly and don't aim to change the political situation. Our goal is to express our vision and stance."

What has changed for Mit during the past three years is that he is now forced to come to Bangkok every month.

The Chiang Mai-based artist must come out of his retreat -- leave his peace of mind, studio and works in progress -- to support young artists putting on their shows at Cartel Artspace on Narathiwat Ratchanakarin Road.

Described as a political organisation, Cartel Artspace aims to be an "action", a "collective" and, primarily, a safe space for young artists, liberals ("hipsters", as Mit calls them) to express themselves in the context of the military rule.

Thailand's decade-long political divide has made inroads into the art scene, where many leading artists and key persons overseeing cultural institutions welcomed the 2014 coup, Mit added.

"As a result, many artists, mostly younger generations and artists from upcountry, felt that they didn't fit with the leading classes. They're encountering difficulties when it comes to showcasing their works."

Artists today are as careful as ever when crafting out their ideas and translating them into their works. But they are not afraid.

In its use of symbolism, art conveys a message through a code, which will take most people some time to crack. "But fortunately, the same goes for the military as well as civil servants."

A photographer whose latest series, "Fear", touches on the issues of power and the military.

Manit Sriwanichpoom has been treading a particularly fine line since the 2014 military coup. As an artist, he feels it is his duty to reflect on Thailand's current situation. Last year, his "Fear" series included the satirical images of Five Generals Who Return Happiness To The People.

Hailed by many as a political activist, Manit also took part in the People's Democratic Reform Committee wave of protests in 2013-2014.

"I didn't sanction the coup. But since the military has taken over, vowing to bring back order, I am trying to emit constructive criticism."

The artist and photographer -- known for his "Pink Man" series, a caustic denunciation of the country's consumerist culture in past decades -- is well aware of the coup's consequences and the restrictions on freedoms that ensued.

He talked at length about censorship in the media and online platforms, calls for all parties to listen to each other's views "for the sake of democracy", but won't change his line.

"I believe that the army won't stay for long," he said.

According to Manit, politicians are the root cause of Thailand's decade-long turmoil. In trying to reform a failing system, the army has created some problems of its own, the artist acknowledged.

"However, I think that I must point out what the government is doing wrong without hindering them. There's also an elephant in the room, something which we can't discuss openly," he added.

All of these elements were present in Manit's latest body of works, collectively titled "Fear", exhibited in four galleries in Bangkok and Singapore last year.

His pieces grasped the sense of dread, as a major change was looming (Manit's exhibition was held in August, just a few months before the late King's passing).

His show was also pushing the boundaries of what the military government should deem acceptable -- although he insists he is not playing with the coup critics' team.

Artists, especially of the younger generations, have nonetheless been affected by the regime's clampdown on freedom of expression, Manit said.

"It's a shame, because art is one channel through which authorities can listen to their people and see what's in their minds," he argued. "Even if you tried to put a lid on it, those thoughts will find a way to surface."

In difficult times, Manit said he has taken a back seat, and offers advice on cultural and artistic policies instead.

"We are trying to turn art into an economic force, but our officials' vision is not up to par yet," he said. "We want Thailand 4.0, but act with a 1.0 mindset."