In the first of our Royal Funeral Series, Life talked to the architect who’s designing the royal crematorium for the late King Bhumibol Adulyadej

Immediately after the passing of King Bhumibol Adulyadej on Oct 13 last year, a team of Fine Arts Department architectural specialists began their work to design the royal crematorium. Kokiart Thongphud -- known as the trusted right-hand man of the late architect Arwut Ngernchuklin, who designed several previous royal crematoriums -- knew that the responsibility would fall on his shoulders. That night his brain began to whirl, his hands skilfully moving the pencil, rulers and paper, his eyes focusing on the details.

"The design must be flawless. It is clear that crematoriums for kings must be in the shape of a busabok [a tall structure with multi-tiered pointed roof]," the 49-year-old architect said. "It was a sad moment, but I must perform my duties and brace for the challenges while shedding my tears."

The Nakhon Si Thammarat native recalled that on the afternoon of Oct 13, about 30 concerned staff members of the Fine Arts Department had a meeting to prepare for the construction of the crematorium. They could not stop crying while discussing the issue. 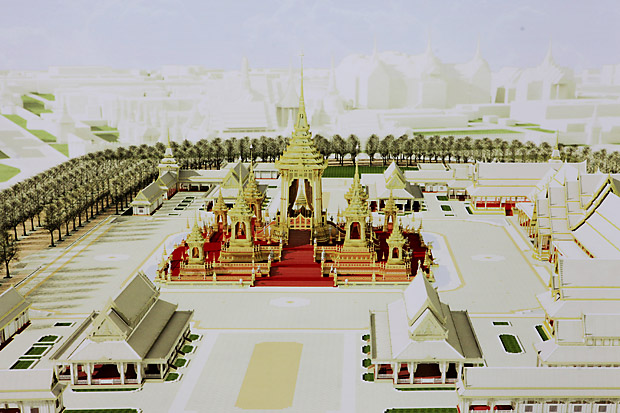 From 5pm until late into the night on Oct 13, Kokiart worked on three drafts. At 11pm, he received a phone call from the director-general, who inquired about progress. He continued working until 4am and finished two drafts (the crematorium with one busabok and the one with five busabok). Then he looked at a bulletin board and saw a picture of Phra Mahathat Chedi Pakdi Prakard in Prachuap Khiri Khan, which has nine tops. Thus another idea sparked and he started drawing the third draft of the crematorium with nine tops.

Before the work was done, he felt so tired and went to bed. After waking up at 7am, he again sat at the table and continued working using red ink and finished the sketches within an hour. Later, he presented his work to the director-general, who provided comments for improvement.

"The next day, our team was led to present our five drafts to Her Royal Highness Princess Maha Chakri Sirindhorn, who looked at the designs and provided advice. The Princess later selected three drafts, all featuring the nine-peak crematoriums, two of them by me. She said she really liked one of my drafts, which looked special. 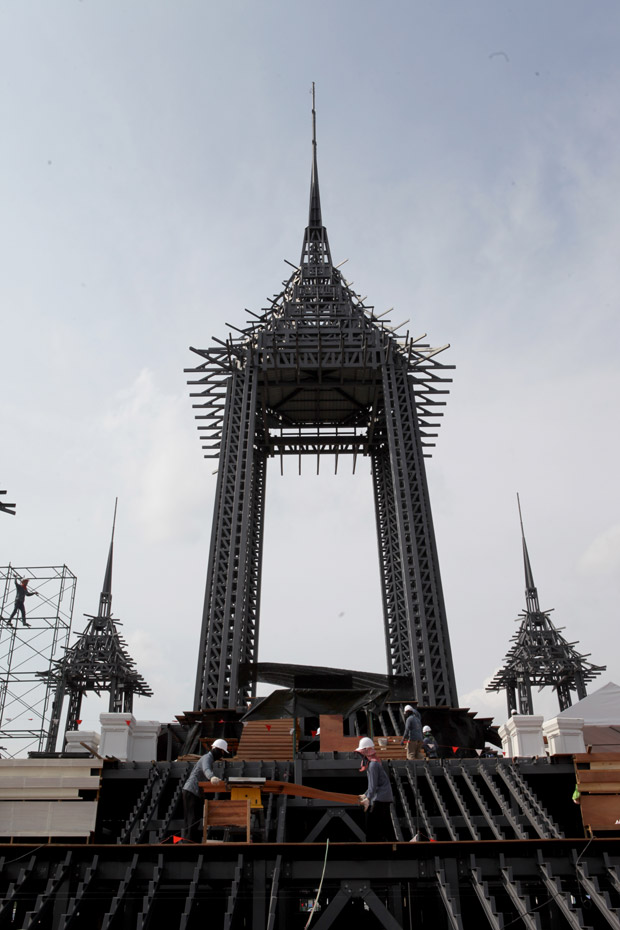 "This design is inspired by some structures and motifs of Wat Pho. The Princess asked me which one I preferred. She said, 'The nine-busabok style is beautiful and each busabok is independent from one another, so I choose this one'. She went on to say that the crematorium must be unique and accommodate many people," Kokiart recalled.

Of the nine busabok, the principal busabok stands on the top and at the centre of the entire structure. Its tip is a white, nine-tiered royal umbrella called noppadol maha sawettrachatra. Inside stands a base called phra chittakathan for placing the royal urn. The main busabok has no wall and is decorated with a royal curtain and beautifully painted partitions.

The construction of a royal crematorium requires all branches of Thai traditional arts and craftsmanship. The royal funeral is hence a showcase of Thai architecture, sculpture, painting, woodcarving and fretwork embroidery, and flower arranging. 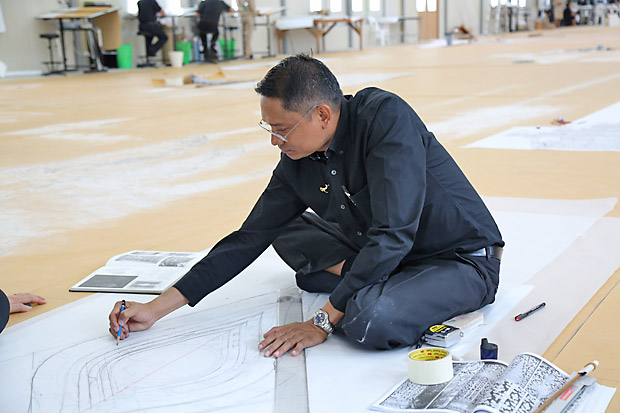 "We studied the past designs and Buddhist literature Traiphum. We looked at details to represent Mount Sumeru, or the centre of the universe, and the Himaphan Forest. The nine busabok are for multi-functions. The central one is for enshrining the royal urn. The next four are for monks to pray. The other four at the corners are for storage and preparation work," Kokiart explained.

According to him, the roof decoration is in the shape of an arch called phakkawam, which looks like the aura around Lord Buddha and represents the Dusit level of heaven, to where the late King will ascend according to religious belief.

Buddhist belief states that a king is a Bodhisattva who will reincarnate as the future Buddha. Being a king is the opportunity to do good deeds to accumulate merit and charisma to be reborn as Buddha. According to the Brahman doctrine, a king is an avatar of the three mighty gods, Brahma, Shiva and Vishnu.

The first tier of the base of the principal busabok is adorned with the statues of Brahman deities Brahma, Shiva, Vishnu, Indra and Ganesh. The second tier is decorated with the statues of gathering angels, or thep choomnoom. The next tier features statues of Gurada, or Vishnu's carrier, in combat with the Naga. Each of the four corners is placed with a small busabok for four monks to sit and pray.

On the second layer of the base, each of the four corners has a small busabok for keeping the royal gold urn, the kalamet wooden urn and some equipment. This level is decorated with statues of various legendary tigers and lions. The lowest layer of the base is circled by walls called ratchawat and adorned with royal umbrellas and the statues of angels holding royal paraphernalia.

Each of the four corners is decorated with the statues of four world-safeguarding deities, or thao chatulokkaban. Around the lowest layer of the base are ponds representing the Anodard Pond and small replicas of mountains adorned with statues of mythical animals.

The main colours for the royal crematorium are gold (or yellow, the colour of Monday, the day King Bhumibol was born), white (symbolising purity and righteousness), pink (the auspicious colour for King Bhumibol) and green (the colour of agricultural work which the late King supported). The roof is in dove-grey, the colour King Bhumibol chose for the roof of Wat Phraram Kao Kanchanaphisek and some other buildings.

The west side of the royal crematorium overlooks a pavilion for the royal family and VIP participants called Phra Thinang Songtham; the east side is installed with a lift and the north side with a traditional staircase called kren for lifting and moving the royal urn from a royal chariot to the crematorium.

The construction of the royal crematorium and surrounding buildings is carried out under a temporary architecture technique using steel frames which are easy and quick to be assembled. For instance, the roof of each busabok is made of steel truss and supported with four steel pillars and a super truss base. All the steel structures are covered with ready-to-use materials and plywood and decorated with gold-coloured fabrics. Statues for decorating the royal crematorium are made of resin and painted beautifully to resemble metal statues.

Arak Sanghittakul, former director-general of the Fine Arts Department who is a senior adviser for the design and construction, said what is outstanding about this royal crematorium is the way it is designed and built according to traditional principles but with the use of new technology. Unlike the previous royal crematoriums that were made of wood, this one is made of steel and wood and can accommodate more than 7,000 people.

The free-standing royal crematorium is 50.49m-high, said Arak, which is greater than the four latest ones (such as the 37m-high royal crematorium for the late Princess Mother). Design work was more difficult than before because it is hard for such a tall building to bear so much weight and withstand strong winds (160kg/m²). Moreover, soil in Bangkok is soft, especially at a depth of 1-5m. The team ran soil tests at Sanam Luang and calculated the design by giving more strength than usual in order to accommodate huge crowds. Furthermore, the ground around the crematorium is reinforced with concrete. Therefore, it is very safe to use this royal crematorium.

The structural work of the royal crematorium has just been completed. The Fine Arts Department is committed to completing the entire project by the end of September.

"Every detail of the design is being enlarged to the real size of the royal crematorium because accuracy is needed to minimise error within the limited time," architect Kokiart said. "This royal crematorium is extraordinary. It exhibits exquisite art and fits a great king who will be in the hearts of Thai people forever."

The royal funeral ceremonies are scheduled to take place on Oct 25-29 this year. The royal cremation is set for Oct 26.