published : 8 Jun 2017 at 05:00
newspaper section: Life
writer: Putthapong Cheamrattonyu
A benshi or live narrator performs with a silent film on the left corner, while musicians are stationed on the right. Photo: Mike Chu

The Silent Film Festival in Thailand, hosted by the Thai Film Archive, has become an annual fixture for moviegoers since 2014. The 4th edition of the festival, during which silent films from the early decades of cinema are screened with live music accompaniment, will begin tonight at Scala and runs until June 14.

On Sunday, the festival will feature a special programme: Benshi, a Japanese tradition of live narration to accompany a silent film. For the first time the audience will experience this colourful and unique performance by master benshi Ichiro Kataoka, who will demonstrate this rare art form deeply rooted in the evolution of cinema.

To understand benshi, one has to travel back to the 19th century. In Japan, a show called utsuhi-e combined a projection of images from Magic Lantern -- an early form of a slide projector -- with traditional performances. Musicians and narrators would sing and tell stories while paintings, and later photographs, were beamed through the lens.

When Thomas Edison invented the Kinetoscope and the Lumiere brothers succeeded with the Cinematograph, the popularity of utsushi-e declined. But the practice of live narration and music accompaniment was applied to moving pictures instead -- benshi. 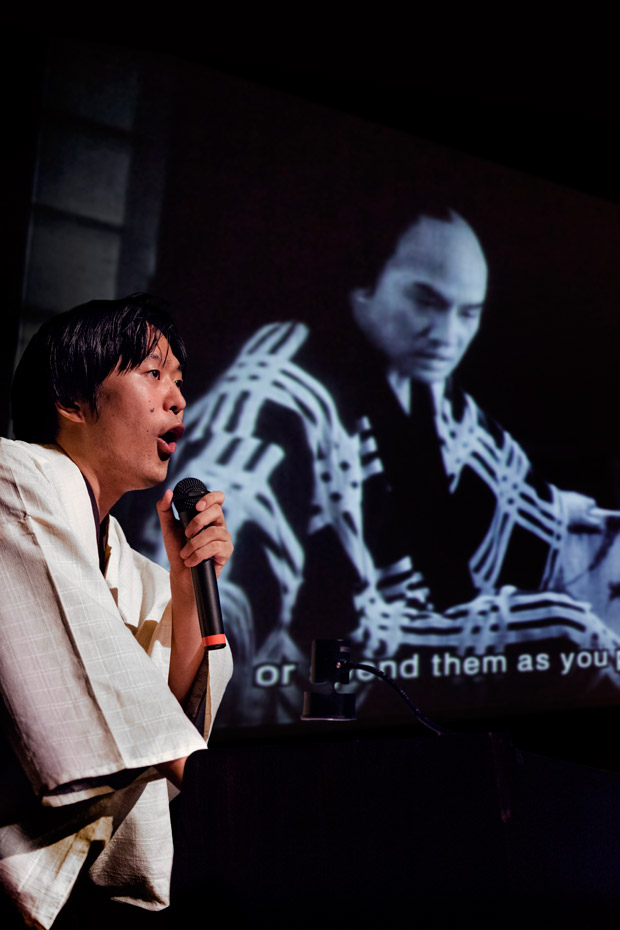 In the early days when each film was short and a record of everyday things, benshi simply introduced the audience to what appeared onscreen or put a spin on it to highlight the magic of this new invention. For instance, when the screen showed a wave crashing ashore on, the narrator would say "to those who're sitting in the front, be careful not to get wet!".

When movies became longer and told stories rather than just showed images, the benshi evolved into a narrator who explained the role of each character and even interpreted the action and the plot in a lively voice and with panache. During the Russo-Japanese War in 1904-1905, benshi encouraged patriotism through film screenings.

When cinema spread through Japan, cinemas roped off a specific area for a benshi to stand while performing live narration -- and they became "the stars on this side of the screen", who were sometimes more popular than the actual stars on the screen.

Only one benshi accompanied the screening of foreign films, while four to five benshi narrated Japanese films. Nearly all benshi were male and they became the powerful centre of Japanese silent film culture -- so powerful that they could demand how loud or soft the music was, or the speed at which a film would be screened.

They could even re-edit the film to suit their liking. For instance the classic American film Intolerance: Love's Struggle Throughout The Ages (1916) originally cut back and forth between four different eras. When it was screened in Japan, a famous benshi demanded that it be recut to tell a chronological story.

Some critics objected to the role of a benshi, claiming that it hampered the development of Japanese cinema. These detractors formed the Pure Film Movement in 1914-1915, arguing that because audiences were accustomed to having a benshi narrate the story, film directors were reluctant to concentrate on the power of visuals.

And yet, not unpredictably, the end of benshi came when cinema had a new invention: sound. When The Jazz Singer came out in 1927 as the world's first sound film, silent cinema knew its days were numbered.

Around that time, Japan had more than 6,000 benshi -- more than the number of actors, actresses and directors combined. When sound films came to Japan in the 1930s, the art of benshi declined. However, it managed to hold out for two decades, till the practice became extinct after World War II.

The Japanese played a crucial part in spreading the popularity of moving pictures in Siam. Tomoyori Watanabe was the first Japanese to set up a "movie tent" at Woeng Nakornkasem on Charoen Krung Road in 1904. Later he built Rong Nang Yee Poon (Japanese Theatre), which was Siam's first permanent movie theatre. There is no clear evidence if the Japanese Theatre featured benshi. The first record of benshi in Thailand was in 1928 when Tuan Yawaprapas, who worked at Pattanakorn Cinema and who studied in Japan, proposed to introduce benshi to compete with sound film that arrived in the country. His boss agreed on the condition that Tuan would have to perform the role of a benshi.

Thus the first Thai benshi was born. Tuan would dress up in rajapatan, or the old-style civil servant uniform, hold a megaphone and narrate the film from the side of the screen. The first title he worked on was the American film When A Man Loves (1927).

Soon Tuan's friend Tid Kiew, a film columnist, joined him in the performance and together they became such a popular duo the viewers kept asking for more. Tid Kiew would go on to deliver the first "live dialogue" -- not narrating a film but speaking the characters' lines in Thai -- of foreign movies and was hailed the "pioneer of dubbing" in Thailand. At the same time, the benshi performance disappeared.

The age of benshi may have long ended, but in Japan it is still treasured as an art form and a cultural heritage. There are young benshi, male and female, who travel to perform at silent film festivals around the world.

As part of the celebration of 130 years of Thai-Japan relations, Kataoka will narrate Chûshingura - Hito No Maki (1926) on Sunday at 5pm and on June 13 at 8.15pm, at Lido in Siam Square.

This article has been translated from the Thai-language original published by the Thai Film Archive.