In troubled times, what is it that we turn to? Is it faith? Superstition? Some of us will embark on a spiritual path, finding comfort or anguish in a never-ending quest, while others may rely on their Cartesian, scientific mind to get through. Some of us may leave it to luck to do its magic, tossing a coin and seeing on which side it lands.

All options are viable, and that's about the only certitude this exhibition will offer you.

In "Heads Or Tails? Uncertainties And Tensions In Contemporary Thailand", nothing is what it seems at first glance, as six influential Thai artists challenge reality in an attempt to make sense of a rapidly changing socio-political context.

The exhibition, on display at the Sundaram Tagore Gallery in Chelsea and Madison Avenue in New York until Nov 4, began as a conversation between curator Loredana Paracciani and the artists on the events that occurred in Thailand in the past year. It spans a vast gamut of Thai socio-political history, with artwork touching on the 1932 Revolution to reflections on the passing of King Bhumibol Adulyadej last year.

"The exhibition isn't so much about the king's passing as it is about what has followed," says Paracciani.

Through painting and sculpture, each artist individually explores this tumult -- decades of political tensions that became crystallised after the 2014 military coup. King Bhumibol's death again threw away all conceptions that had begun to form in the past few years.

Although clearly anchored in a Thai context, their works -- characterised collectively by the investigation of dual narratives -- find resonance at the global level. How does one land on their feet in quicksand?

"Usual suspects" Thasnai Sethaseree and Mit Jai Inn -- as the curator playfully calls them -- have long been offering social commentary through their respective artistic practices.

Their latest series of works further examine dual facets of reality, inviting viewers to scratch beneath the surface and cross physical boundaries to see what lies beneath or on the other side.

Mit Jai Inn's double-sided canvases present a colourful outlook and a much darker perspective, depending on where one chooses to stand. The Chiang Mai-based artist offers viewers the choice many of us are denied in our everyday lives -- but only if we dare to challenge our original conceptions and cross the physical partition created by the hanging canvas. The regimented, coloured stripes reveal a more sombre side, albeit instinctual and organic.

Similarly, Thasnai's practice of multilayered collages and paintings toy with viewers' perceptions and alternative readings of the works.

A triptych of sorts, Thasnai's three paintings examine some of the darkest hours of Thai history with apparent embellishments referencing the state-sanctioned rewriting of historical events.

All three works are untitled but between brackets are the incidents they refer to -- again, leaving viewers with the choice, to either gaze at the seemingly innocent paintings or face the horror beneath them.

The first event is the Oct 6, 1976, massacre of students at Thammasat University at the hands of right-wing militias, a continuation of Thasnai's previous set of works on the slaughter.

His second instalment deals with the 2010 crackdown on red shirt protesters, a bloodbath that left over 100 people dead following protests in the heart of Bangkok. Several Thai artists have examined this incident, often pointing to the "whitewashing" of the horrific clampdown by the government. Here, the artist paints it over in blue, in stark contrast to the red of the blood and the colour of the so-called "red shirts" who died.

In his third painting, he memorialises a commemoration plaque for the 1932 Revolution that overthrew Thailand's absolute monarchy and installed a constitutional regime. The plaque mysteriously disappeared a few months ago and was replaced with a new one celebrating the monarchy.

Although each artist offers strong criticism of narratives offered by the powers-that-be, their approach is deeply personal and subdued.

Artist Angkrit Ajchariyasophon's series of "Playing Cards" is perhaps the most graphic and visually-telling of the exhibition.

These playing cards are in appearance innocent and, by definition, playful. The striped paintings, with the same colour scheme as the Thai flag, in fact hide paintings of four distinct figures on their back: the King, the Queen, the Jack and the Joker.

Cautious, the artist has painted over the first three figures' faces, and only the Joker -- a cartoonish rendition of junta strongman Gen Prayut Chan-o-cha is shown to the public.

In the exhibition, like in a game of poker, only the back of the cards are revealed, as players withhold and conceal from one another. But what cards are handed to players from the deck is, again, entirely up to their luck.

The amulets, religious statues and divinities of aquarellist Tawan Wattuya also emphasise mankind's reliance on superstition and the misleading comfort these beliefs provide.

In a humorous set of works, reprising the "Twins Series" he began a decade ago, Tawan's figures are all double-headed, double-bodied, inquisitive and mind-poking.

Amulets, offerings and prayers are all for good luck, but Tawan's aquarel paintings also vividly portray deference and a form of submission to a yet-unknown fate.

"Tawatchai is, to begin with, a genius," says Paracciani. "What he does in his artistic practice is basically the impossible."

In a post-truth era, where distorted facts and manipulated data have become the rule, Tawatchai's drawings, engravings and sculptures are a tribute to our imagination and questioning mind, a challenge to the narratives we are being presented with -- albeit one founded on precise, mathematical calculations rather than the hazardous falsities that flood the internet.

Using various techniques and tools, Tawatchai twists the shape of the Earth in a way that defies both equilibrium and our preconceived notions. What comes out of it is the promise of infinite possibilities.

Sanitas' deeply introspective sculptures meanwhile question faith and religion, as the artist -- originally an architect -- attempts to capture the essence of it all.

In her "Form Of Belief" series, she cuts stupa-like shapes through books and glasslike resin, rejecting materialism. She seemingly conveys that the absence of matter, such as holes in a pile of manuals on spiritual knowledge, is in fact what we are looking for.

Her works are oft covered in dirt and soil, as a way of telling viewers to look beneath it, as she similarly peels off the mould of her sculptures.

In a site-specific installation, she goes further, inviting people to stand in this space of absence and truth.

As the artists exhibited in Heads Or Tails? collectively present alternative ways of viewing and thinking, they also ponder on what each individual would do when presented with such uncertain situations. Painfully, most of us would opt out, relying instead on luck -- still the easiest way out yet. 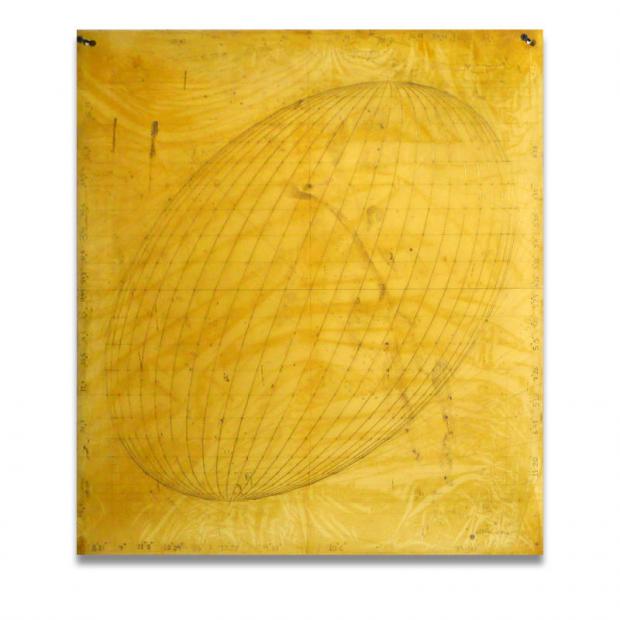 An engraving on a brass plate showing the tweaking of the Earth's proportions by Tawatchai Puntusawasdi. Photos Courtesy of Sundaram Tagore Gallery . 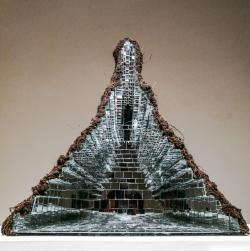 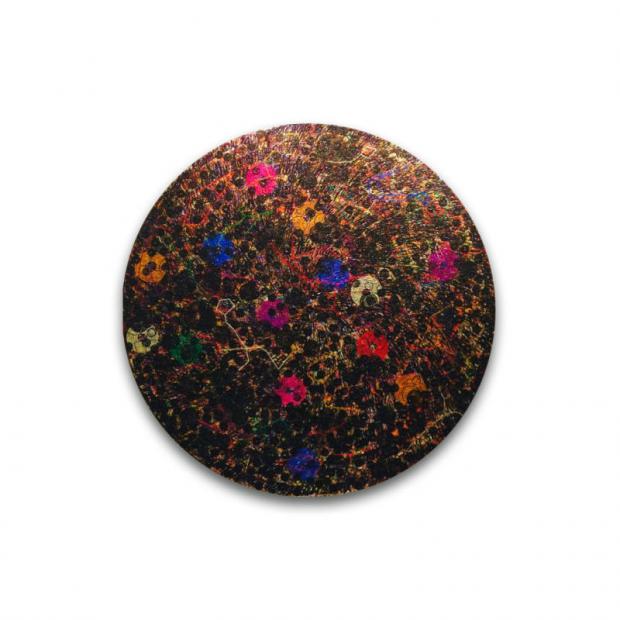 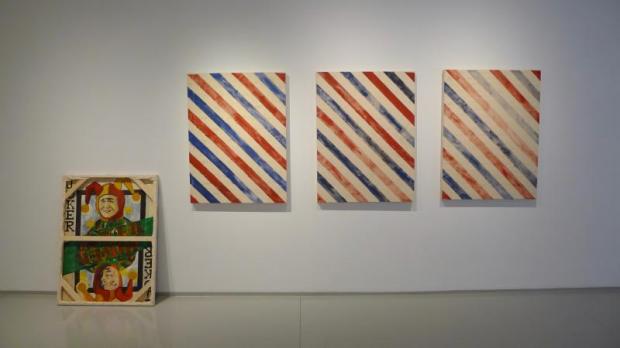