In the five years François Roche has been living and working in Bangkok, the French architect has positioned himself as far away as he could from institutions, expats and what he calls the "gentrified crowd".

The Bangkok in which Roche operates is an interzone, evasive to forms of authority, rough and disorderly at times, but a haven for whomever wishes to question power relations and produce anomalies.

From his studio in the city's Talad Noi district -- a shack of zinc and wood located by the river -- he creates prototypes and fictions that have made their ways into exhibitions in Europe and the Americas. Thai audiences on the other hand have had but a few occasions to view his works.

"Tomorrow_n(h)ow", an in situ showcase of Roche's recent works curated by TARS Gallery, ended last month, but this is not the last we'll see of him in Thailand. The architect will take part next year in the Bangkok Biennial, an alternative event to the larger Bangkok Art Biennale.

In years past, a wall of anonymity has surrounded Roche, who spoke to the media and cultural institutions under the cover of transgender avatar S/He, to which he served as a personal secretary.

S/He was created by Roche and his former collaborator Stéphanie Lavaux in the 1990s until the avatar's "suicide" in 2011. It was just recently reanimated after Roche's relocation to Bangkok.

His architectural practice, called New-Territories, is conveniently situated in the heart of the city, but it could as well be in a border town. Roche's close involvement with local communities has translated itself over the years into the fabrication of shelters for the homeless and the marginalised, through architecture that seeks to include rather than regiment the landscape and functions on the basis of pre-existing, local data.

"Tomorrow_n(h)ow" opened with a series of prototypes created by Roche and his team. Robots responding to environmental and human signals are hard at work in the studio, the ensemble of which forms an ironic message that the architect sends to the world.

"In the realm of architecture, robots are symbolic of control," he says. "Myself, I utilise these robots, not to assert control over them, but to lose this control entirely."

In reaction to many architects' working principle of "tabula rasa", or creating from a blank space, Roche accepts preliminary specifics and motives, discovering as he goes the results robots give him. 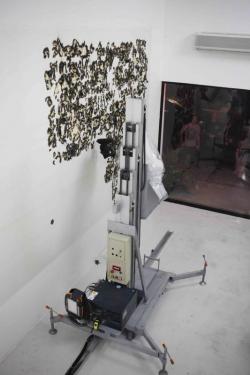 The prototypes look rather like giant strands of spaghetti or human excrement -- a substance that Roche has once used as part of his work, through the collection of contaminated mud from a slum in Makkasan.

A provocateur, Roche views architectural practice as a form of activism. In many of his works, audiences and participants -- both willing and unwilling -- are confronted with their own contradictions.

Prior to leaving Paris, Roche's house was transformed into an experimental project titled "I'mlostinParis". On the façades, he cultivated bacteria which served to regenerate vegetation.

"At first, neighbours were thrilled to see so much greenery. But after it got out of hand, a prosecution was launched against me," he adds.

Nature is appreciated, as long as it remains in a domesticated form. Wilderness, on the other hand, bothers.

Roche has a long history of taking part in the Venice Architecture Biennale, but after an incident in 2010, the Frenchman jokes that "curators won't be inviting me back so soon".

His installation, called the Building Which Never Dies, contained radioactive uranium and was confiscated by the police. It also led to the closing down of the entire Arsenale section of the Biennale during one day.

While the Building Which Never Dies called for a reflection on uranium, a material that allowed for so much scientific progress, as well as acts of barbarism, to take place, it was also perfectly safe, he explains. Roche and his team had installed Geiger meters to prove this, but ironically, it was those same items that raised alarm.

Similarly, in 2016, his Bangkok exhibition at TARS Gallery "La Vie En Rose" toyed with collective memory or collective amnesia in the Thai context.

References to historical events were written down on a blank sheet, which a robot then proceeded to scratch, triggered by the movements of viewers in the gallery space. As such, in art, the audience participated in the erasing of history, just as many do in life.

When conceptualising his works, Roche likes to think in terms of scenarios and several of his works find their place in "mythomaniaS", short films that the architect directs himself.

"Architecture shouldn't be a finality, but a means to question and to change a given situation," he argues.

In those mythomaniaS, Roche reaffirms his position as an iconoclast, who doesn't hesitate when he needs to, to burn books and give the remaining ashes to Makkasan locals to inhale.

In "What Could Happen", a collaboration with artist Pierre Huygue and Roche's former associate Camille Lacadée, the architect invited members of the elite "art crowd" on a train journey to a Swiss sanatorium.

At 3,000m altitude, the train stopped and one man got off, stripped naked and began to walk towards a frozen lake and into an igloo-like structure built by Roche.

Passengers on the train watched the scene, bewildered as the man apparently committed suicide. As no one moved, the train left.

On the way back, Roche had arranged for an actress, part of the performance, to begin insulting the train's passengers for failing to help.

"From there on, it gets very mean," Roche says with a laugh.

While the name Myth is a contraction of myths -- stories we tell to reassure ourselves -- and the pathological mania, Roche also expressed his disappointment and bitterness through his avatar.

In a recent exhibition in France, a glitchy image of an aged S/He appeared. This retrofuture video, supposedly from the 2050s, has the avatar explain his disillusionment with contemporary architecture.

S/He was born at a time when the notion of "starchitect" was appearing. A strange period, according to Roche, who wished to depersonalise his work.

"Suddenly, architects had to promote themselves and that, I found, didn't suit me," he says. "For that reason, I had to invent a Ziggy Stardust for myself."