You can observe Eiji Sumi's seesaw-like art installation from a distance, or you can engage with it. Either way, it's "play or be played", as the larger-than-life platform offers biting commentary on the mechanics of politics.

Over the past year, Gallery VER has hosted a fair amount of installations touching on the political realm. Play(e)scape, with all its kitschy aesthetics derived from children's playgrounds and theme parks, is no exception. The circular platform that fills the gallery's main room becomes a metaphor for the political stage, and the audience its main actors.

Born out of the artist's "frustration over Thai politics in the past decades", the installation relies on both physics and psychology to recreate a mock democracy -- that includes its limitations and failings -- a space of discussion and confrontation in which power players use their weight to negotiate their positions and ascendancy.

"You need a critical mass to change the angle of the platform," Sumi says. The Japanese artist, based in Thailand for five years now, has designed a shifting deck that tilts left and right.

"It's pure physics. If the weight is equally distributed, the platform will be balanced." But on the simulated playground, as in political elections, the side counting a larger number of people wins.

At the exhibition's opening, scores of visitors took turns stepping on the installation, moving back and forth as well as attempting to convince the rest of the audience to come to their side. Every time the platform hit the bottom on either side, the room's colour scheme altered as lights travelled to the heavier half, mimicking the dynamics of political power shifts.

In Orwellian fashion, Sumi demonstrates that while all animals are equal, some are more equal than others. While the extremities of the circle can hold fewer people, these have the maximum weight and influence. In regard to recent political protests such as the Occupy Wall Street movement, Play(e)scape could well illustrate the power struggle between the world's 99% and the commanding 1%.

The installation requires visitors' active participation. Much like in political life, passivity entails having others decide what's best for you.

Mostly known to Bangkok audiences for his light installations, Eiji Sumi mixes various media in his exhibition at VER. Fluorescent hues of blue, purple and red, as well as highly edited photographs of theme parks and fairs in Thailand and Germany, turn the gallery into a clownish box, disconnected from reality.

Human zoos -- individuals dressed up as Moors; caged girls in freakish ghost attires -- as well as hyper-lit playgrounds are featured in Sumi's painterly photographs, a tangible sensation of discomfort exuding from these hyperrealist renditions of the amusement parks the artist visited.

"I took on a cynical approach. But the people I witnessed playing in these parks seemed to be genuinely having fun," he adds.

On a visit to Germany last year, Sumi encountered families of Syrian refugees, who not only fled war to come to Europe but appeared to be escaping the reality of their daily lives through the theme parks.

Although Play(e)scape was built out of a Thai context, the issues it touches on are global. With the growing use of social media, individuals become entrapped in their own bubbles. They consume partisan media and interact with similarly minded people. In Europe, the US or Sumi's native Japan, political issues have divided populations in recent years.

"My machine is not intended to make people change their political opinions. Everyone is entitled to their own views," he says. "I only wish for the audience to look at issues from the other side and engage in a discussion."

Although Play(e)scape has strong site-specific elements to it -- the platform tailor-made to fit the gallery's dimensions and surrounding photographs -- it could well be taken "out of the box" to allow a larger audience to access it and engage with Sumi's concept. This would further democratise the mock political dynamics he envisioned. 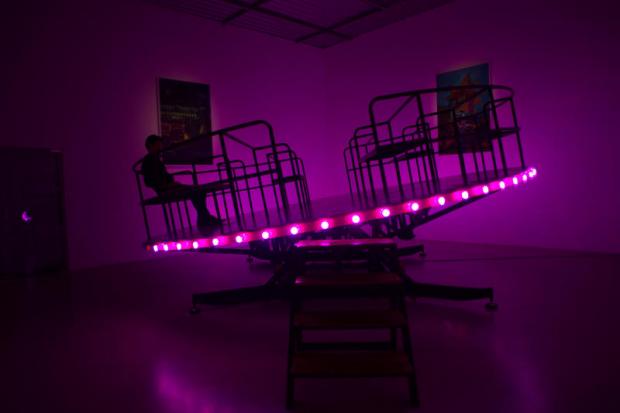 Play(e)scape at VER Gallery in Bangkok. Photograph courtesy of the artist.