Thai artist Thasnai Sethaseree, whose monumental-scale paper collage work questions Thai historiography and structures of power, is among the finalists nominated for the 2018 Signature Art Prize in Singapore.

The award, held every three years by the Asia Pacific Breweries (APB) Foundation and the Singapore Art Museum, recognises outstanding artworks by both emerging and established artists from 46 countries from the Asia Pacific Rim to Central Asia.

While the awards ceremony will take place on Friday, the Chiang Mai-based artist's politically-charged work Untitled (Hua Lamphong) is already being exhibited at the National Museum of Singapore -- until Sept 2 -- alongside those of Japanese artist Yuichiro Tamura, the Hong Kong duo Leung Chi Wo and Sara Wong, Vietnamese artist Phuong Thao Nguyen and collective The Propeller, as well as several others. 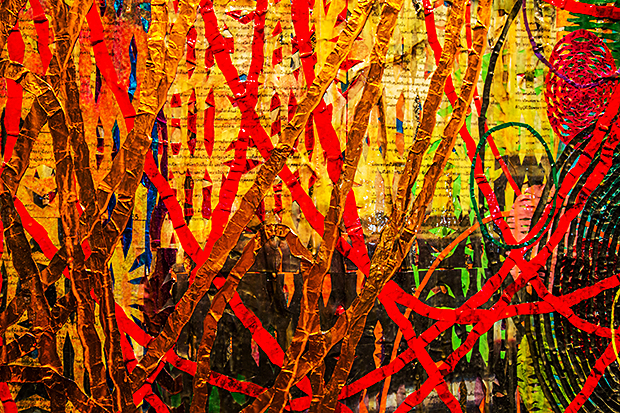 Untitled (Hua Lamphong) was exhibited at Gallery VER in Bangkok in 2016, as part of larger series and exhibition on political violence and manifestations of power. The exhibition's title "What You Don't See Will Hurt You" referred to the concealment and distortion of historical facts by those who write the national narrative, as well as Thasnai's own multilayered assembling of historical and contemporary archival documents, photographs and themes.

Reading Thasnai's work is often akin to engaging in an archaeological excavation, as layers of paint, cloth and paper are accumulated to form a fresco-like depiction of political events, in which the artist's repetition of movements and acts of covering up are nods to the perpetual rewriting of history as well as the rituals involved in ceremonies and commemorations.

The profusion of details along with the dimensions of the works -- titanic and obliterating individuality -- mimic the grandeur of these staged events.

"Thasnai is one of Thailand's most accomplished artists who is extremely successful at bringing together in his works both strong, 'conceptual' components with equally strong visual elements," says art historian Gregory Galligan, director of the Thai Art Archives, who nominated Thasnai's work for the prize. 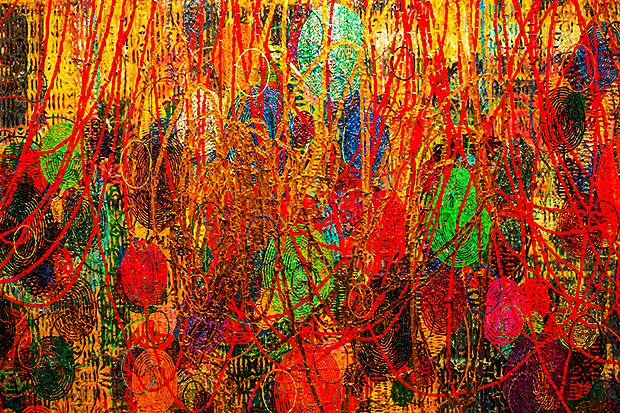 "The work never preaches at you. Rather, it stimulates you to take up its themes as a personal experience that seems both local and universal simultaneously. Thasnai coaxes you to arrive at your own conclusions, which is what art is really all about -- unless you are practicing artistic activism or creating political agitprop or propaganda to force only one particular point of view upon your audience," Galligan further argues.

The Hua Lamphong train station is one of three symbolic seats of power and theatres of political protests referenced in the Thai artist's series, acting as emblems for democratic ideals which became co-opted over time.

While the two other locations -- the Royal Rattanakosin Hotel and the parliament -- are tied to the Khana Ratsadon history, the introduction of a new architecture and political system, the train station belongs to an earlier era. Commissioned by King Rama V, Hua Lamphong was both a tool of modernisation and centralisation of power, as workers from all parts of the country converged to Bangkok through railroads.

"When the high-speed train project was first announced, many people saw it as a way of decentralising Thailand by facilitating access to regional capitals and secondary cities," says Thasnai.

"But when it was abandoned and picked up again by the military regime, the project's aim was shifted entirely towards commercial benefits and projecting modernity."

In Untitled (Hua Lamphong), Thasnai cut and assembled old photographs of the station with contemporary shots taken by the artist himself, using the same camera angle. Excerpts from the draft constitution, written by the 2014 coup-makers, are also part of the composition, as allusions to Thai history's cyclical nature and the lack of substantial cultural or political progress.

Meanwhile, monks' robes hint at the commercial nature of Buddhism in Thailand as well as the moral discourse used by one political faction, with its distinctions between "good people" and "evil people" and politically-motivated character assassinations, supported by moral value judgements. As Untitled (Hua Lamphong) is part of a triptych of works, when asked why he nominated this piece alone, Galligan responded that he was "very taken by the way Thasnai uses the theme of the historic Hua Lamphong train station as a sign, or symbol, for a cultural ideal: the unfettered movement of people and ideas across many regions of the country".

"I was also deeply impressed by the way Thasnai uses traditional techniques of collage, paper cutting, montage, and gestural, abstract painting to speak to a very contemporary subject: the critical importance for people of every persuasion to think clearly and analytically about the spectacles around them, which are sometimes not only earnest and celebratory but may be staged, by some, as a kind of 'camouflage' for hidden agendas.

"The potential dangers of spectacles of distraction and seduction is a message with global resonance, especially at a time when societies all over the world seem to be breaking down into self-interest groups seeking only to reaffirm their own biases and material well-being over others."