Egyptian mummies who come to life as sexy nymphets. Thai princes driving fast cars. A Thai superwoman who casually murders several husbands. Starlets touting breast-enhancement techniques. For a book about "nationalism and identity in modern Thai literature", this volume has a few surprises. 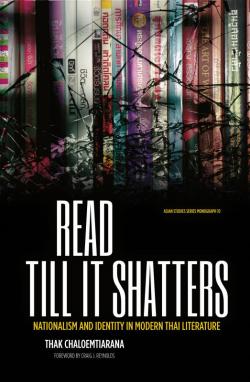 Thak Chaloemtiarana is best known for a classic study of the military dictator, Sarit Thanarat. In a serendipitous late-career move at Cornell University, he shifted to teaching and researching on Thai literature rather than history and politics. Thak had never suffered the highly conservative approach to literature taught in Thai universities, but drew on state-of-the-art theory (especially post-colonialism) and his own enthusiasm for reading. The resulting articles were so fun and fresh that the Young-ish Turks of the Thai literary scene promptly translated and published them in Thai. Here, Craig Reynolds has midwifed a collection of the English originals, and the Australian University Press offers them as a free download. The title -- Read Till It Shatters, after a Thai idiom meaning to read analytically -- hints at the book's impact.

The first novel translated into Thai was Marie Corelli's Vendetta, a mystical melodrama of marital infidelity and revenge, published in 1901/2. The translations quickly became so popular that in 1914, government passed an act to encourage Thai stories rather than more trashy imports. A publisher commissioned Khru Liam, a translator, to write the first Thai novel, with a title that was a counterblast to Corelli (meaning roughly No Revenge) and a Buddhist theme of turning the other cheek. Khru Liam churned out 730 pages, by his account in only 22 days. The work fulfilled the publisher's brief, but went much farther in its portrayal and criticism of the urban society of its time. An ordinary provincial man weds a beautiful wife and brings her to Bangkok, where she is corrupted by the city's amoral society, abandons her husband, and is punished by the loss of her beauty. Later in life they meet again, he forgives her, she repents, and her beauty is restored. The reader is titillated by the graphic accounts of the city's salacious life, and then gratified by the Buddhist ending of virtue bringing its own reward in real time.

The book did not sell well. It disappeared from sight, and was rediscovered only in 1997. Thak suspects that the social commentary was "ahead of its time", and that the readership wanted exotic foreign novels rather than a local product. Khru Liam seems to have drawn the same conclusion. He churned out another 400 pages, claiming it was an English novel translated into Thai. He adapted the plot from Rider Haggard's She, which he had already translated, but upped the titillation level by introducing female Egyptian mummies who come to life as irresistible sex objects and then collapse into a heap of bones -- the ultimate male fantasy of sex without consequences. This, too, did not sell, perhaps because Khru Liam admitted his subterfuge in an afterword.

The Thai literary establishment has defined a canon in which the first novels are three written in 1929. Thak protests that Khru Liam's two works from the 1910s deserve recognition as the pioneers. He argues that they are a fascinating reflection of Siam's situation in the high-colonial era -- not colonised, but not uncolonised either, somewhere in-between. Khru Liam was not slavishly copying the West, but "capturing" it. Thak's pioneering work has prompted the rediscovery of several other early novels, short stories and unusual translations.

At the other end of Thak's journey through a century of Thai literature, he starts buying the celebrity autobiographies that are stacked beside the till in his Tops Supermarket. Several of these are by politicians which he dismisses as boring. Instead, he concentrates on three other categories. The "filthy rich" are tycoons who dispense advice on working hard and thinking big while quietly boasting their success. The "incredibly gorgeous" are starlets who, by a mix of beauty and talent, have taken control of their lives in the face of social conventions, and who wish to inspire others to follow their example. Two of Thak's small sample have extended their careers by championing methods of breast enhancement, one by cream, the other by a slapping technique. The last category are the "tragically comical", men from poor backgrounds who make a career as TV comedians, but fail when they invest in other businesses because they lack the education, social networks and other advantageous assets. This little study lays out Thailand's inequities along class and gender, while offering a very Thai riff on the universal theme of the city as a land of opportunity.

Four other articles complete the collection. Thak traces the portrayal of the Thai-Chinese in writing from King Rama VI through to the biographies and family histories of recent years. He reviews Susan Kepner's biography of the pioneering literary scholar, ML Boonlua Debhayasuwan, concentrating especially on her novels, which are now undergoing a revival. He gives a detailed account of Luang Wichit Wathakan's extraordinary 1949 novel, Sea Of Love, Chasm Of Death, in which a larger-than-life Thai heroine casually murders several husbands, travels the world, presides over a small country, and dies in a gunfight, which Thak compares to the climax of Bonnie And Clyde. Finally, he sneaks in an article about the motor-racing exploits of Prince Bira and Prince Chula, which has nothing to do with literature and everything with fast cars, which Thak loves. In a short introduction, he explains the genesis of these articles in the context of his own career.

Woven through these articles are several themes which are also at the core of Thailand's modern history: the country's unusual experience of the colonial era and its legacies; the struggle over ownership of the Thai nation; the meanings of modernity; the status of the Thai-Chinese; and the gender relations which result when a society has both very assertive women and very ingrained male chauvinism. By combining a love of reading, a career of scholarship and warm humanism, Thak educates, enlightens and entertains.

Read Till It Shatters: Nationalism And Identity In Modern Thai Literature