Last week in a toilet in Bang Rak Bazaar, a man looked down at his own body while also gazing up at the paintings of naked women on the wall. Placed above a row of urinals, the paintings -- modelled after images taken from pornographic websites -- were impossible to miss.

The pop-up exhibition "Sic Transit" by French artist Myrtille Tibayrenc was playful and provocative. It was staged as a component of the Quid Pro Quo pavilion of the Bangkok Art Biennial, and the venue -- the public toilet in a marketplace on Charoen Krung Road -- inspired curiosity as much as the paintings themselves. Tibayrenc, who's been living and working in Bangkok for over a decade, drew on both the historical gravity surrounding the female nude and the ubiquity of pornographic images in the internet era. She talks to us about her exhibition.

'Sic Transit' took place for just one day, in the toilet at Bang Rak Bazaar. Where can we see the paintings now?

The exhibition was a one-day pop up. I enjoy pop-up shows, as they can be organised in very unconventional places very easily. It's also a good chance to exhibit something a bit subversive and get away with it as it is very short. All my original works came back to my Chiang Mai studio after the show. We replaced the originals with reproductions on stickers that I laid out in the toilet till the end of September.

An obvious question, why the toilet?

I actually painted all these without having any exhibition plans. When Rebecca from Liv_Id collective invited me to exhibit in the Quid Pro Quo pavilion [at Bang Rak Bazaar], I was very happy and thought of a way to make the place a bit more playful for everyone -- to touch the people who come here every day to work or to eat and shop. The toilet was perfect as everyone goes to the loo. I actually had works in both toilets -- women's and men's. The idea was to break the rules a bit and allow for one day women in men's toilet, and vice versa. Just to see the reaction of the people. The men's toilet happened to be more outstanding, because it was bigger and so works were more visible. Men are also more curious and open-minded when it comes to erotic art. Women from the market didn't enjoy my paintings, they thought they were ugly and inappropriate, but men really enjoyed them. Children were very happy, little boys were queuing up saving their three bahts to enter and discover the 'taboo' images, laughing and screaming! I never had such a lively audience. 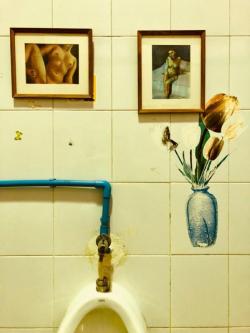 The show is designed, I think, so that a man at a urinal would gaze down at his own body while also gazing up at the paintings of the female body.

I was intending to (re)connect the viewer with the art work in a more physical and less intellectual way. I studied art in an era in which everything was intellectualised to the point that the viewer might need a text to understand or know how to appreciate a piece of art. It always was a problem to me, as I am a very romantic and somehow conservative person. I enjoy direct works which touch you emotionally, physically and intellectually.

The female body has been painted, sculpted, photographed and replicated for centuries. What fascinates you most about it?

What fascinates me the most is exactly that -- that the female body has always been a major subject for artists to explore since immemorial times until today. I have a passion for art history especially painting history, and when I paint, I enjoy imagining I am somehow connected to all these artists who painted before me, under different circumstances, for different reasons, with different social taboos. The time we live in is very playful as most of these taboos gave place to new ones. When Courbet painted The Origin Of The World, times were very different; painting was glorious and looked up to. It was sacralised, and he broke these codes by painting in a very frontal and realistic way the picture we all know.

Do you think there's a difference between the female body painted (or sculpted or filmed) by a male vs by a female artist? Can the viewers tell?

I don't really think a viewer could tell if my work was painted by a man or a woman and I like this. I think we tend to categorise gender too much. I know very romantic, prude and shy men, and abrupt, vulgar and nymphomaniac women. But of course if you have a quick look at art history or even subculture, you can tell if the artist was gay, straight, man or woman, as usually they tend to express themselves and their deepest emotions in their respective art. When I see the works of Michelangelo it is hard not to see he was very attracted to men.

Would you be interested in doing a reverse? Male pictures in a female toilet?

I exhibited a lot of nude males in my two previous shows, at Serindia and at the Barbar fetish club. There were a few male nudes in this show as well, but less provocatively so than the female ones. Women have a different way of looking at sex and nudity. It is somehow more subtle. My intention is not to shock anyone, but to make art in an accessible and playful way. I actually exhibited three sets of paintings in the women's toilet and selected more romantic or emotionally striking works. Like a series of Lewis Carroll's little girls, body scars, pain and loneliness. Another view of the body and what it endures during our short stay on this Earth.