Not the usual fare

Two idiosyncratic filmgoing options for fans of Thai cinema — one classic, one contemporary

The tag line in Thai is catchy: Plae Kao, burana mai -- or, "The old wound, newly restored". The 1979 classic film Plae Kao (The Scar) is now being re-released in two cinemas (Scala and SF CentralWorld) in a 4K restored version commissioned by the Thai Film Archive and the family of the late Cherd Songsri, the director of the film.

The restored The Scar had a premiere on Sept 19 at Scala, which was packed to the front-row seats, to commemorate Cherd's birthday. Last week the film was shown in the classic section at Busan International Film Festival, a premier film event in Asia. The commercial release at two screens this week marks an unusual return of a vintage movie to the big screen. In Europe or the US, classic titles are shown at speciality cinemas every day, but bringing back an old film to downtown theatres isn't what we see here often. Hopefully that will change, because there's an audience who's ready to take a break from the Hollywood offerings that swamp our moviegoing experience.

The Scar was a major hit when it came out 39 years ago, despite the difficulties Cherd faced securing the budget and convincing theatres to screen it. In a classic star-crossed lovers' tale, Sorapong Chatree -- so majestically tanned and muscular -- plays Kwan, a peasant boy of Bangkapi who's in love with Riam (Nantana Ngao-krachang, so attractive and natural) even though their parents are sworn enemies. Kwan courts Riam by chasing her on a buffalo and singing likay verses, and their frolicking in a canal is an indelible image of pastoral romance that captures at once the reality and romanticism of old Thailand.

For old-timers, this is a chance to revisit memory. For younger viewers, hopefully they will see The Scar as an honest, sincere and even innocent film whose beauty is seldom matched by what has come since. It's not a perfect film, in technical or ideological terms, but it's still one of the most important in Thai history. The film has never been released on DVD (if you've seen any, it's illegal), and the restored version, likewise, is unlikely to be available as home entertainment. This is the chance. 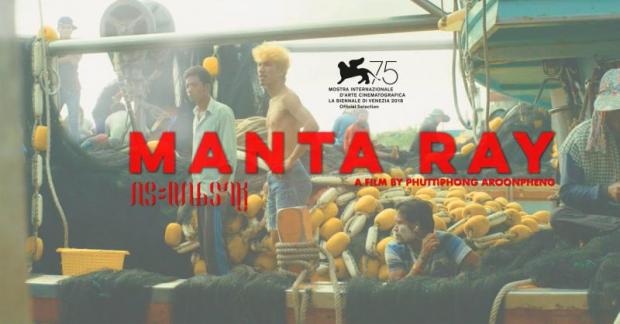 Phuttiphong Arunpheng's Kraben Rahu (Manta Ray) has become the highest-profile Thai title of the year. The film has had a busy film festival itinerary, beginning in Venice in early September, since showing in Toronto, San Sebastian, Busan, Vancouver, Pingyao (a new festival in China), and soon travelling to Thessaloniki in Greece, Cairo and many others.

Earlier this week the film received a nomination for Best Film at the Asia Pacific Screen Awards, a Unesco-endorsed film event in Brisbane that celebrates film culture in the region. Manta Ray is now competing for the highest honour, alongside other acclaimed Asian titles of the past months: Shoplifters from Japan, Burning from Korea, The Gentle Indifference Of The World from Kazakhstan, and Balangiga: Howling Wilderness from the Philippines.

Manta Ray has also been nominated for Best Cinematography (the cinematographer is Nawarophaat Rungphiboonsophit).

The film, offbeat and lyrical, tells the story of a fisherman in a coastal province, probably Ranong, who discovers an injured Rohingya man in a forest. The fisherman takes the man home, nurses him back to health, and names him Thongchai -- after the singer Thongchai McIntryre. But the fisherman has a side job, one that's uglier than his daily toiling in a fishing boat, and after he mysteriously disappears, Thongchai slowly takes over his life.

Manta Ray will open in Thailand early next year.