published : 24 Oct 2018 at 04:00
newspaper section: Life
writer: Apipar Norapoompipat
Across The Universe And Beyond 2018 by Sanitas Pradittasnee at Wat Arun.

Ancient temples and modern art. They seem like two ends of a cultural spectrum that wouldn't seem to bridge well with one another.

But in reality, history and avant-gardism can be a fascinating blend. As part of the inaugural Bangkok Art Biennale 2018, the international contemporary arts festival taking place around town, artworks by 16 leading local and international artists have settled into the three of the most iconic temples of Bangkok: Wat Arun (The Temple of Dawn), Wat Pho (Temple of the Reclining Buddha) and Wat Prayoon (Temple of Iron Fence). The mash-up of the ultra traditional with the ultra contemporary explores themes of spirituality, Buddhist philosophy and concepts of Sino-Thai relations in simple but elegant ways that blend in seamlessly with the temple compounds. Life talked with a few artists at the scene about their artwork and thought process.

Hopping off the ferry onto the grounds of Wat Arun, visitors walk past peculiar statues. Two sentinel giants, one Thai and one Chinese, are attached at the hip -- standing proud and carrying their weapon of choice. Usually seen standing separately in front of the gates of Wat Arun and Wat Pho on the other side of the river, the conjoined nature of the giants is a big giveaway that this isn't a historic statue. 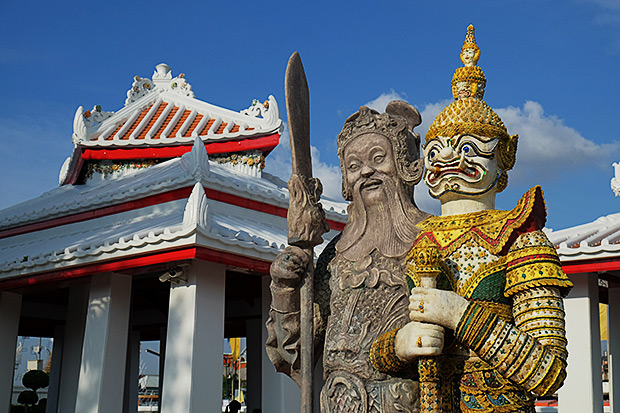 Looking closer, the giants are made of fibreglass, and the rings that they wear are made from Lego pieces. This is the subtle artistic signature of Thai artist Komkrit Tepthian, who rose to fame from making Lego sculptures.

"I'm playing with the mix of Thai and Chinese cultures that exist within this temple," said Komkrit, who named his artwork Giant Twins.

"Wat Arun came out of this mixture of Thai and Chinese culture. King Rama II very much liked to bring in Chinese craftsmen. So I see this as a sort of cultural exchange. Back then [during the reign of King Rama II], Thai and Chinese people were close like siblings. Wat Arun is a temple that symbolises the relationship between Thailand and China."

Wanting to express this relationship, Komkrit came across a nugget of information that the original Siamese twins, Eng and Chang, were born in this exact era. The twins, who were born in Siam to Chinese immigrants, were dubbed the Siamese twins and took the name of Siam all over the world.

"I played with that piece of history and created the Giant Twins," said Komkrit. "They have the same role of guarding temples. But it's just expressed through different aesthetics."

Komkrit also has two other artworks on the temple grounds: a garuda statue that's a mix of both Thai, Chinese and Mon aesthetics, as well as a toy vending machine (coming later in the festival) that will dispense 10 figurines of Wat Arun's guardian statues. Inside each capsule toy will be a piece of paper describing the history of the artwork, as well as a little map for tourists to tour and understand the temple through their own means.

"It's like giving people historic information through toys and souvenirs," he said. "So tourists don't feel like they're being forced in to learning anything. It's to let them feel like they want to know more from the toy instead."

A few steps away from Giant Twins is Sanitas Pradittasnee's mesmerising Across The Universe And Beyond. Sanitas, a landscape architect, takes over Wat Arun's once neglected Kao Mo (ancient rock gardens that replicate sacred mountains), and turns it into a poetic and multilayered site-specific installation that explores the inner self. Half of the restored garden is enclosed inside bright red acrylic walls, and visitors are encouraged to walk through the lush and peaceful enclosure to reflect upon themselves. It's a work that superbly blends the historicity of the place with artistic experiment, an intervention that also pays homage to the original intent of the site.

"I wanted to create this installation piece for people to step over from the outside world, looking outside, into the inside world, looking inside," explained Sanitas. "When I did my research, the red colour came from ancient paintings. Ordination halls used red on the ceilings reflecting emptiness and loftiness. Here, it's [literally] a red box of emptiness."

Walking from the "outside world" into the "inside world", everything, from the flora to the rocks to yourself, becomes a bright shade of empty red. Mirrors scattered on the garden floor as well as sculptures made from mirrors create a surreal dance of light inside the enclosure.

"From the outside world transitioning into the inside world, it's a comparison that the environment is not that different. It's still rock, soil and sand. And the light that shines through talks about the change. I want this to be a space for [people] to look inward. What can we do for people to just have time to stop caring about the outside like materialism or social media? I was very careful in creating the space for them to slowly move inward, and each [sculpture inside] has a different meaning."

With the thousands of statues inside Wat Pho's 8 hectare compound, it's easy to mistake Chinese-French artist Huang Yong Ping's artwork as another century-old statue. 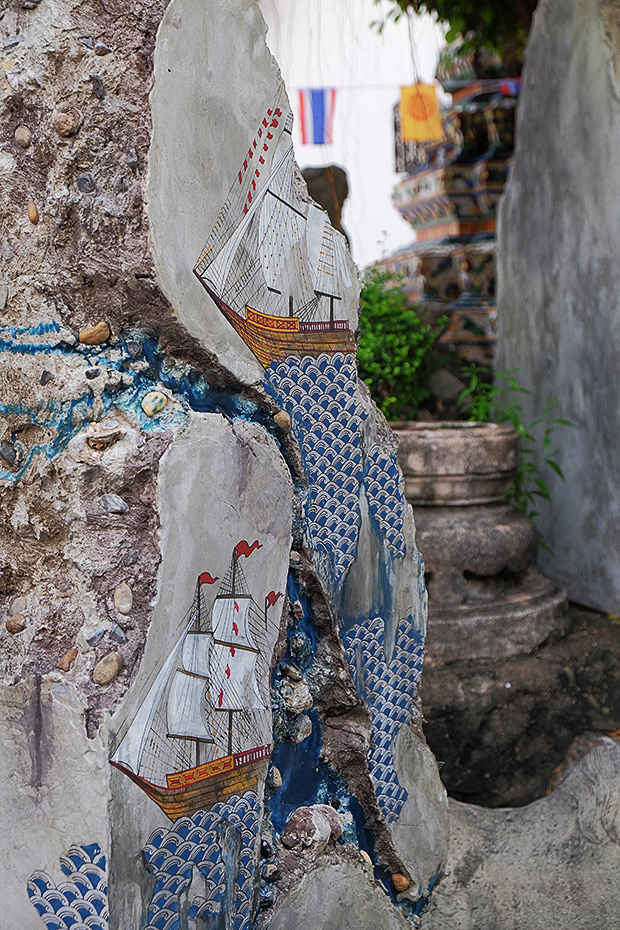 Sediments Of Migration 2018 by Pannaphan Yodmanee at Wat Pho.

Inside the temple's Sala Masikawan, Huang, one of China's most famous avant-garde artists, places sculptures of giant feet topped with heads of mythical creatures as a kind of guardian to the pavilion. Huang, who spoke through a translator, seemed to want to explore many layers of Buddhist and Chinese philosophy, and how wisdom, faith and healing are pursued in both cultures. The scrolls inside the creature's mouths, which relate to medicine, reflect certain things that we have to understand within ourselves. The temple's historical connection with Chinese influence -- as well as the fact that it is now a top destination for millions of Chinese tourists visiting Bangkok -- adds more layers to the work done by the artist.

Walking further into the temple compound, Phaptawan Suwannakudt's multilayered and multisensory installation takes up the whole pavilion of Wat Pho's Crocodile Pond. Developing her late father's practice of traditional mural painting, she has placed inside the pavilion a large mural, which is copied from the temple wall; hanging mirrors; Thai texts and paper cut-outs of figures with massage points on their bodies; aromatic herbs scattered on the floor; and the sound of a woman, reading a poem.

"The overall concept of this piece is of collective memory and personal memory," said Phaptawan. "It links with how Wat Pho has been registered to Unesco as a 'Memory of the World'. Part of that has to do with skills in massage, architecture, poetry, myths and stories. In terms of personal memories, I am an artist that used to work with murals 20 years ago, and then I moved to have a family in Sydney. When I set my roots there, my memories moved with me, and I taught this knowledge to my son and daughter who are now adults."

On a more playful note, Jitsing Somboon's interactive Faithway turns temple-goers into a walking exhibition through the white clothes that are distributed to visitors. Made of micro poly fabric, the white clothes are screened with the word "faith", and when donned in a large number by tour groups (as he expects them to be), the throng of visitors will seem to profess their sincere and ironic vow in the setting of the temple.

This handsome temple located not far from Wat Arun is a showcase of several site-specific works by artists who looks at spiritualism and death. 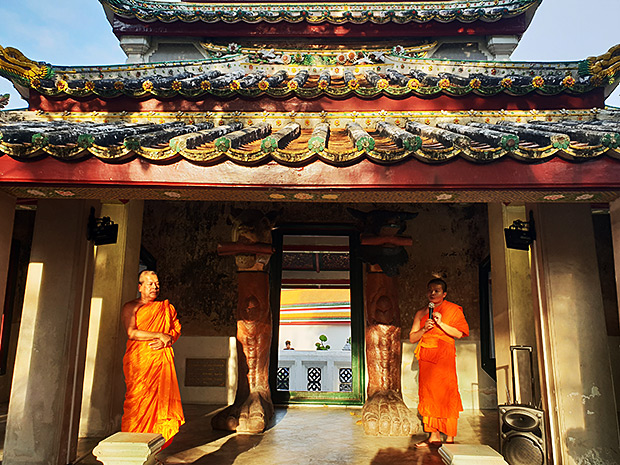 First of all -- and rather unfortunately -- Torlarp Larpjaroensook's Spiritual Spaceship, a sci-fi-looking installation piece that attempts to create a vehicle that transports the soul, has been relocated to the Bangkok Art and Culture Centre for reason of space. Torlarp's piece, an elaborate, home-made contraption made up of everyday objects of worship, would have made a splendid case of transcendentalism in the temple.

Still, Wat Prayurawongsawas (or Wat Prayoon) hosts a number of magnificent pieces. Paolo Canevari's Monuments Of The Memory, The Golden Room is a set of gold-gilded wood sculptures that seem to complement the temple's solemn gold-coloured decoration. Meanwhile, the spectre of death and decomposition is rendered through the "skull carpet" by Nino Sarabutr -- the work is called What Will You Leave Behind and made up of a thousand tiny porcelain skulls laid down on the ground near the temple's ash repository.

Arnont Nongyao's Chat Na, "the next life", is an LED light and video installation that is at once trippy and meditative, a futuristic take on the ancient concept of the continuation of soul. And in Kamol Phaosavasdi's Sweet Boundary, a mock-up set of rooms illuminated by pink light and transparent boundaries asks visitors to contemplate their own journey into another realm -- that it is set in a temple heightens a sense of spiritual transport.

Bangkok Art Biennale's temple sites are definitely worth a visit whether you're local or a foreigner. The concept of opening temple grounds for artists to bridge the gap between traditional and contemporary is revolutionary, especially in a country like Thailand where the two art forms have been separated for so long.