Every molecule of Marina

The 71-year-old artist believes in the transformative power of art, which she puts on display during the Bangkok Art Biennale

Marina Abramovic, sitting in the tearoom of a Bangkok hotel, was talking animatedly about the first time she learned to cook Thai food in the early 1980s. 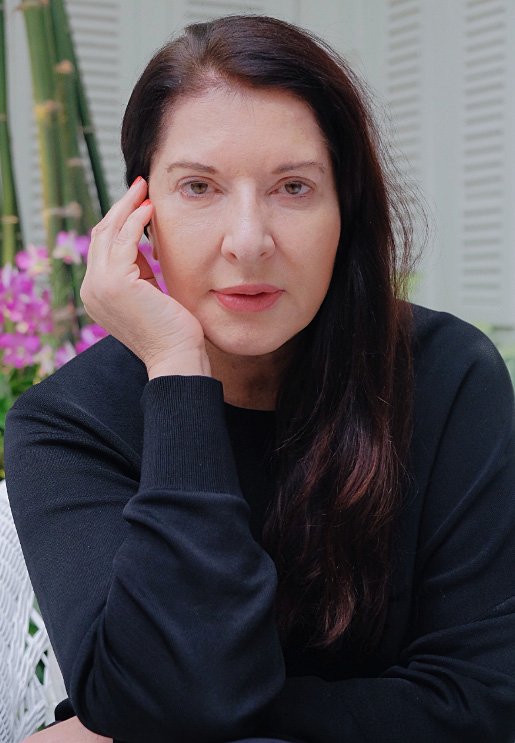 Marina Abramovic in Bangkok for the Bangkok Art Biennale 2018.

"I went to a little island called Koh Tao and there was an old lady," she said in her husky voice and Eastern-European inflection. "She had a wok, and I had a wok. She cut the vegetables, I cut the vegetables. I repeat and I learned everything. Tom kha gai, tom yum goong, sticky rice, green curry, red curry. Then I discovered durian," she laughed.

Charming, motherly, funny, it's a side of Abramovic the public rarely gets to see. For almost five decades, the 71-year-old performance artist has been trailblazing the art scene by pushing the limits of her body and mind in the most extreme ways to explore the complex relationships between artist and audience, between herself and the world, and between the brutal reality of life and the possibility of tenderness and redemption. Today, she's regarded as one of the most daring avant-garde artists in the world.

Her early performances, now cemented in art history, are shocking, intense, and at times horrifyingly uncomfortable. She's stabbed a knife repeatedly on the gaps between her splayed fingers back and forth at full speed; she's had her ex-lover Ulay aim a bow-and-arrow straight at her heart; she's walked into a bonfire and collapsed from the heat. And most infamous of all, she laid down 72 objects on a table, allowing audiences to do anything they wished with her for six hours. By the end, she was stripped naked, her neck was cut, her blood was drunk, and if that wasn't enough, an audience member put a gun to her head with his finger on the trigger, causing a fight to break out between those attending the gallery. 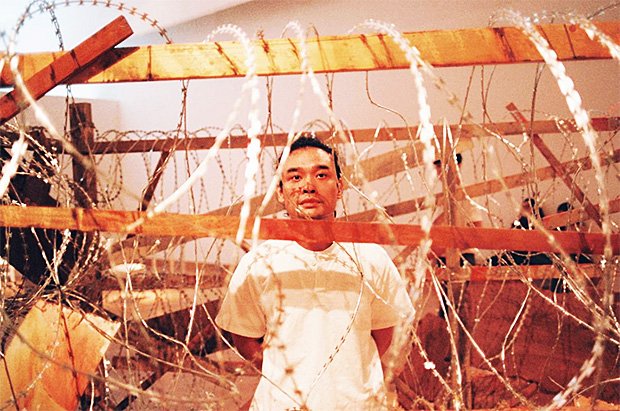 "Behind the shock you have to see the message and content, which is the most important," explained Abramovic about the latter performance. "For me, that work was really important in exploring the possibility whether the public can really kill you or not. So bad news, the public can kill you," she said with her eyebrows raised.

None of this shock and bloodshed, however, is being exhibited at the inaugural Bangkok Art Biennale 2018 (BAB 2018). Instead, Abramovic, who was the first to sign onto the art festival, has brought in her later projects -- specifically her Marina Abramovic Institute (MAI) and The Abramovic Method for audiences in Thailand to experience first hand.

Yesterday Abramovic, for the first time in years not wearing black, also received a royal visit by HRH Princess Sirindhorn at BAB headquarters on Witthayu Road. 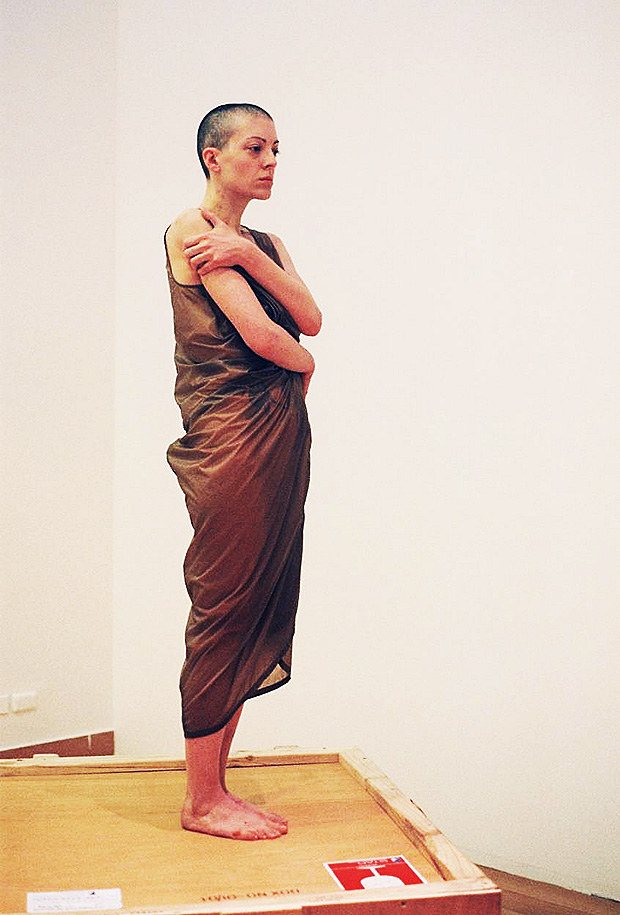 Running until Nov 11 at the Bangkok Art and Culture Centre's (BACC) are eight stunning long-duration performances called A Possible Island? by eight handpicked artists from MAI. Like Abramovic in the past, the artists perform for three weeks non-stop, eight hours a day, exploring profound issues while testing their own physical and mental strength to the limit.

One of the most touching and heart-wrenching performances is by Myanmar artist Lin Htet, who simply stands inside a barbed-wire prison for eight hours straight to examine the ongoing Rohingya crisis in his home country. Though a simple concept, the execution is so intense and its meaning so profound that some audience members have wept at the sight of him.

"That piece is so strong," Abramovic said. "It's so incredibly tense -- where he comes from, what he has to do, what he's suffered. Creating an environment like a prison. It talks so much to your heart. You really feel the pain, you really feel tension, you feel everything." 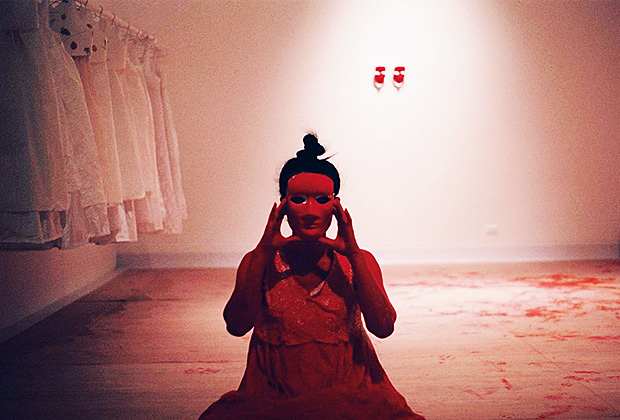 According to Abramovic -- who's most famous endurance piece is her 2010 The Artist Is Present, where she sat for over 700 hours in New York's Museum of Modern art to lock eyes with visitors one by one -- the importance of the long-duration performances is its transformative power between the performer and audience.

"You always see that kind of fluidity and continuation in your mind even when you go home because you didn't see the ending. And it's still there because you know next day [they're] there. That kind of long duration is important. When you do something for one hour, you can still act. You can still pretend and play somebody else. But after a few hours, everything drops out. What you see is real. Nothing is fake because you can't make it eight hours. You can't do eight hours a day for three weeks to pretend anything. That's is why long duration for me has transformative energy more than any other short performance."

These performances, for the artist, also creates a kind of community that organically comes together through the energy of the work.

"When you see and you feel that energy, you say, 'Oh my God this is incredible. It's eight hours?'. And the next day you want to come back to see if they're still there. Then you start inviting friends to come see. Then friends say, 'Oh my God this is incredible', then the friend invites other friends. This is how we form a community around performance art, which is very different than something like a painting. You have a painting on the wall and the next day the painting is there. It's always there. But this is live energy. Live energy is different energy." 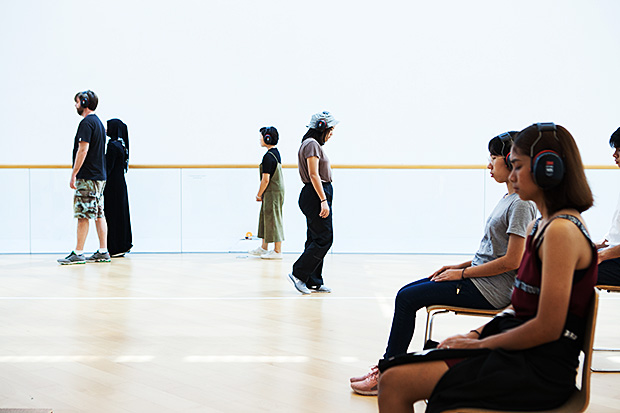 A long-duration performance requires charisma, quality, stamina, willpower and total dedication to the project. For The Artist Is Present, Abramovic prepared one year in advance by completely shifting her internal body clock to not eat or go to the toilet during the eight-hour performance.

"It's really important to establish certain rules," said Marina. "First I never rehearse. If I rehearse I will never do anything because it's so difficult. I count on the energy of the public that's actually going to help me. Energy of the public I'm absorbing, and then I can do things that normally I can't do in real life. If the public interrupts the piece, electricity stops, earthquakes happens, you faint, it's all part of the work in that period. [As for] expectations, I have no expectations. I only have expectations for myself that I have to give everything I have, every molecule in my body. What the public takes, is up to them, I can't control that."

On the other side of A Possible Island? is The Abramovic Method -- where lines of visitors snake up to the curved walkways of the BACC. The Abramovic Method is a series of meditation exercises developed by the artist, hoping to bring participants into a present state by concentrating on breath, motion and stillness.

Putting away possessions and going into the area, you're handed noise-cancelling headphones. A staff member, dressed in Marina's signature all black, takes your hand and leads you to one of the five meditation stations. One station lets you separate and count rice from lentils, another lets you walk slowly from one mark to the other, and another has you sit and stare at a piece of red, yellow or blue paper. With the absolute silence and lack of distractions, you're truly faced with yourself and the present moment. Some people find it calming, some people feel anxiety, and others instantly walk away once they see the exercises they have to do.

"These exercises mix many cultures together and are what works for me and what works for others too," said Abramovic. "Counting rice is my invention. Interesting how concentration in our life right now is no more than two-to-four minutes. You get angry and ask, 'What the shit am I doing'. [It's a] beneficial exercise. You get headphones so you're really isolated. Plus you don't have any gadgets to remind you of time, so you become alone with yourself and then you understand that, 'OK, no matter what, I'm going to finish this'. Your breathing changes, you start breathing slower, you become relaxed and time stops existing and you become present. 'Hello, welcome to presence'. That's the aim."

Abramovic recommends experiencing the Method before observing and participating in the long-duration performances as visitors step out much more concentrated and aware of their surroundings and the subtle movements of each artist. All the performances deal with time, and the longer time you get to concentrate on each piece, the more you can understand.

"[Art] can give light to certain things," she said "They can show the way, they can ask right questions, they can open their consciousness. For me it's not about solving issues, it's about how you can change yourself. Change yourself and you change thousands. Like Ghandi. It's so simple to blame everybody on different issues … but what you have to [ask] yourself is, 'What am I doing to change something?'. For me, my institute I'm trying to change something. [As well as] long-duration performance art. How you can really get into the idea of presence? You can really change. Something happens in you. That change can affect you, but you also affect others."

"Now," the artist laughed after almost an hour of talking. "Could you ask me something normal?"

"OK, what kind of ice cream do you like?"

"Durian," she said with a big smile.

By MAI and The Abramovic Method
At BACC's 8th floor
Open Tue-Sun, 10am-9pm