A matter of life and death
Life
Arts & Entertainment

A matter of life and death

A river that sustains approximately one-tenth of the world's population is dying. Victor Mallet's River Of Life, River Of Death: The Ganges And India's Future explores why -- and simultaneously melds political and economic analysis with a compelling travelogue and a journey through the mythology of one of the world's great religions. 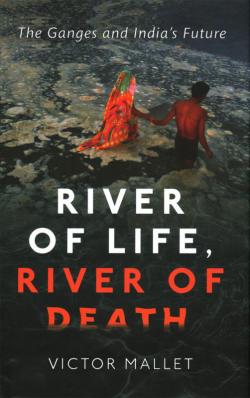 River Of Life, River Of Death

Mallet -- the former Financial Times Asia editor kicked out of Hong Kong last year after hosting Hong Kong National Party leader Andy Chan at the Foreign Correspondents' Club -- begins the book at the source of the Ganges in the Himalayan foothills and ends 260 pages and 2,500km later at the river's mouth in Bangladesh. In between, the narrative hops upstream and downstream, from religious site to industrial centre, from paradise to hell.

It is at the river's source -- at Gaumukh, the icy cavern known as "the cow's mouth" at the foot of a glacier -- that the legend of the Ganges begins. In one version of numerous competing legends, Indra, king of the gods, "frees the nectar like waters of heaven to nourish the earth by defeating the great serpent Vritra, who has coiled around the vault of heaven and imprisoned the waters of immortality".

The mythical Ganges is more central to the identity of those who live along it than any other river in the world. But paradoxically, Mallet shows, the river's divine nature has been used as an excuse to pollute it. To those who drink it, bathe in it and believe in its essential purity, it is impossible for the river to be unclean, despite the overwhelming evidence to the contrary.

Ironically, some of the pollution is directly caused by worshippers. Not only do Hindu pilgrims defecate and leave trash, the religious icons they launch into the river -- think Loy Krathong on a much vaster scale -- are non-biodegradable and leach noxious chemicals into the water. And because the river is holy, many Hindus wish their ashes to be scattered in it. If the family is too poor to buy enough firewood, most of the corpse is dumped intact.

Other than religious effluent, Mallet catalogues the three primary sources of the Ganges' filth: untreated sewage, factory discharge and pesticides. The river's toxicity does more than threaten the health and livelihoods of the 500 million people it sustains: it has become a breeding ground for "superbugs" that some believe could wipe out humanity.

Mallet does more than "fathom the wonders and follies of India through a river", as author Gurcharan Das describes the book. As a master storyteller, he explains one discipline in terms of another, interweaving geography, climate science, history, economics and politics in a colourful cascade.

Kolkata grew into a monstrous ecological nightmare because the British found it the most convenient base for their trading empire; Kanpur's tanneries, which spew dyes, salts, acids and the highly carcinogenic chromium into the waterway, are blamed by many majority Hindus for polluting the river partly because they are owned by Muslims who don't care about the river's holiness -- although Hindu politicians avidly court their votes.

All the grandiose plans to clean up the Ganges -- including those of Narendra Modi, the current prime minister vying for re-election -- have failed because between 30 and a staggering 100% of the funds have been diverted or simply stolen by corrupt bureaucrats. What has filtered through has been spent on cosmetic trifles such as beautifying the ghats (steps) down to the river. More effective -- and expensive -- remedies, such as building and maintaining sewage treatment plants, don't show results for decades, when a new set of politicians take the credit.

Climate change is brought to life in the form of a travelogue, with Mallet using his journalistic skills to couch his analysis in terms of the real people he met and vivid descriptions of nature; while the book has only a handful of pictures clumped in the middle, reading it is very much like watching a documentary… crossed with a horror film.

In one sense the book is repetitive, with multiple references to the mind-numbing scope and breadth of the pollutants flowing into the river, but repetition is necessary to convey the problem's magnitude. The central themes resurface in chapters -- on the depiction of the Ganges in Bollywood, the recorded impressions of foreigners, the history of boats that have plied the river, its dangers and historic importance as a trade route -- and end with a chapter on the magnificent mangrove forests of the river's mouth in the Sunderbans… disappearing, of course, under the now-familiar assaults of pollution, population pressure and climate change.

Mallet is a journalist, historian, travel writer and economic and political analyst. This epic work showcases his skills as a master storyteller with a love for, fascination with and dread of India and its vital, filthy and inspirational river.