The spectacular Walking With Dinosaurs show returns to Bangkok

A thunderous roar shakes the entire arena. Towering above the awestruck crowd, majestic dinosaurs bring prehistory to life. These incredible creatures will soon be brought to life at Walking With Dinosaurs: The Arena Spectacular, which takes place at Impact Arena Muang Thong Thani from Sept 12-15. It is brought to Thailand by BEC Tero Entertainment.

The show features 18 lifelike dinosaurs from nine separate species varying in size from hatchlings to a giant Brachiosaurus some 11m tall. Among the other species on show in the arena will be Stegosaurus, Torosaurus, Utahraptors and, of course, the stars like the Tyrannosaurus rex.

Each species will take turns making an appearance on the showground, with a narrator in safari suit guiding the audience along. Seeing these dinosaurs, so lifelike, interacting with one another and with the audience is a wonder.

Originating in Australia in 2007, Walking With Dinosaurs: The Arena Spectacular has travelled to 250 cities around the globe and be seen by more than 9 million people. The show is a live adaptation of the award-winning BBC series. It first came to Thailand in 2010, where it was sell-out. Now nine years later, it's back with a modified, updated experience filled with light and sound that promises to be unforgettable for audiences of all ages. 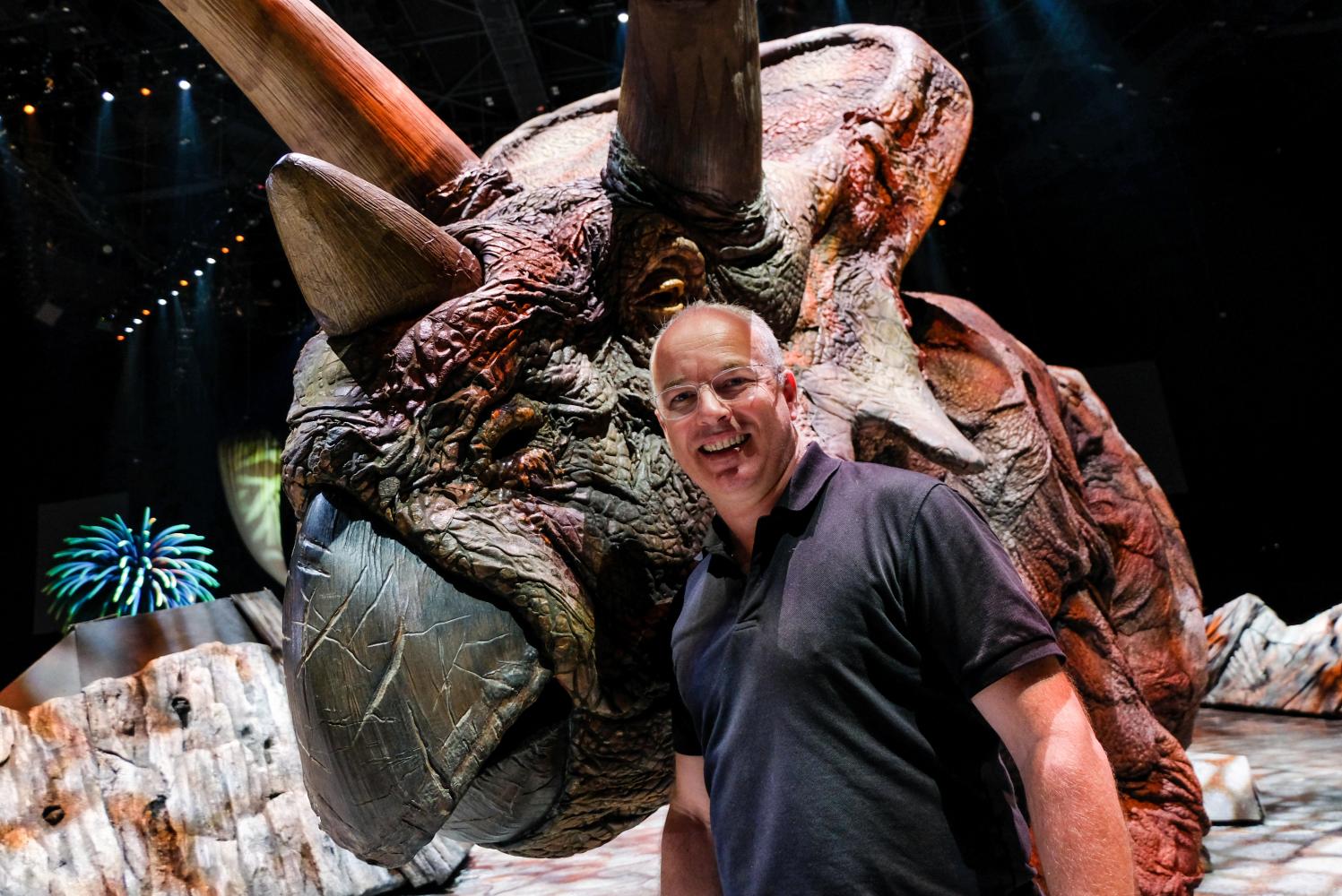 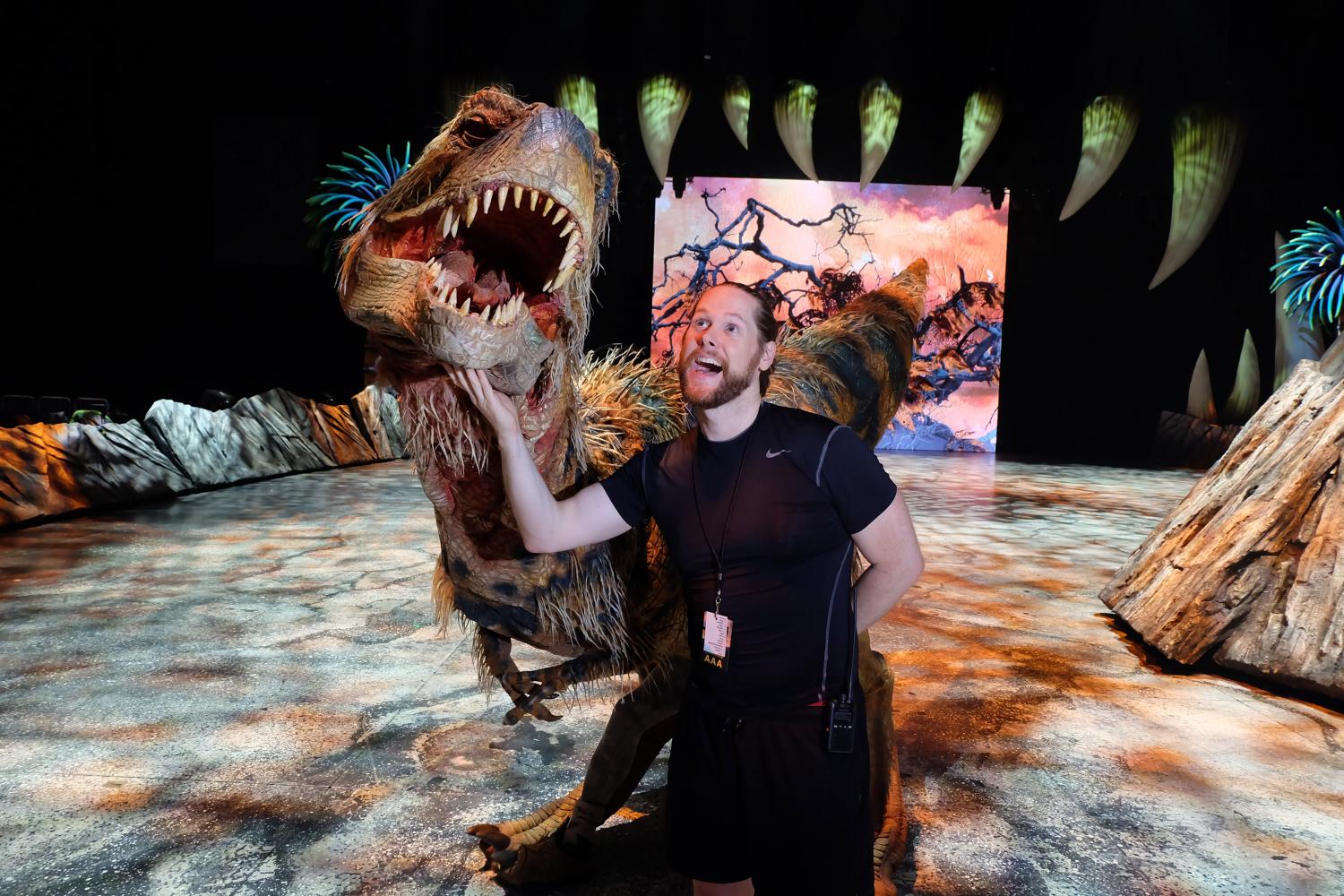 B. magazine went behind the scenes of this dinosaur extravaganza during its recent run at the Yokohama Arena in Japan. The venue was packed with excited families, especially children sporting dinosaur T-shirts and toys. We were welcomed by the production team, with resident director Ian Waller introducing us to the majestic beasts.

Over the years, the show has been trying to keep up with the latest findings within the palaeontological world to make sure the dinosaurs are as accurate as can be.

"They've discovered and proved that our raptors actually have feathers, so we had to send our raptors, baby T-rex and mama T-rex back to Australia where they research. They actually put feathers on them," said Waller. "We try to adapt as much as palaeontology adapts."

Waller's background is in musical theatre, performing in and directing the likes of Mamma Mia and Miss Saigon before joining the Walking With Dinosaurs team. As the show is choreographed to music, he's a perfect fit.

"You can only have a certain amount of ABBA, then you have to move on to dinosaurs," he laughed. 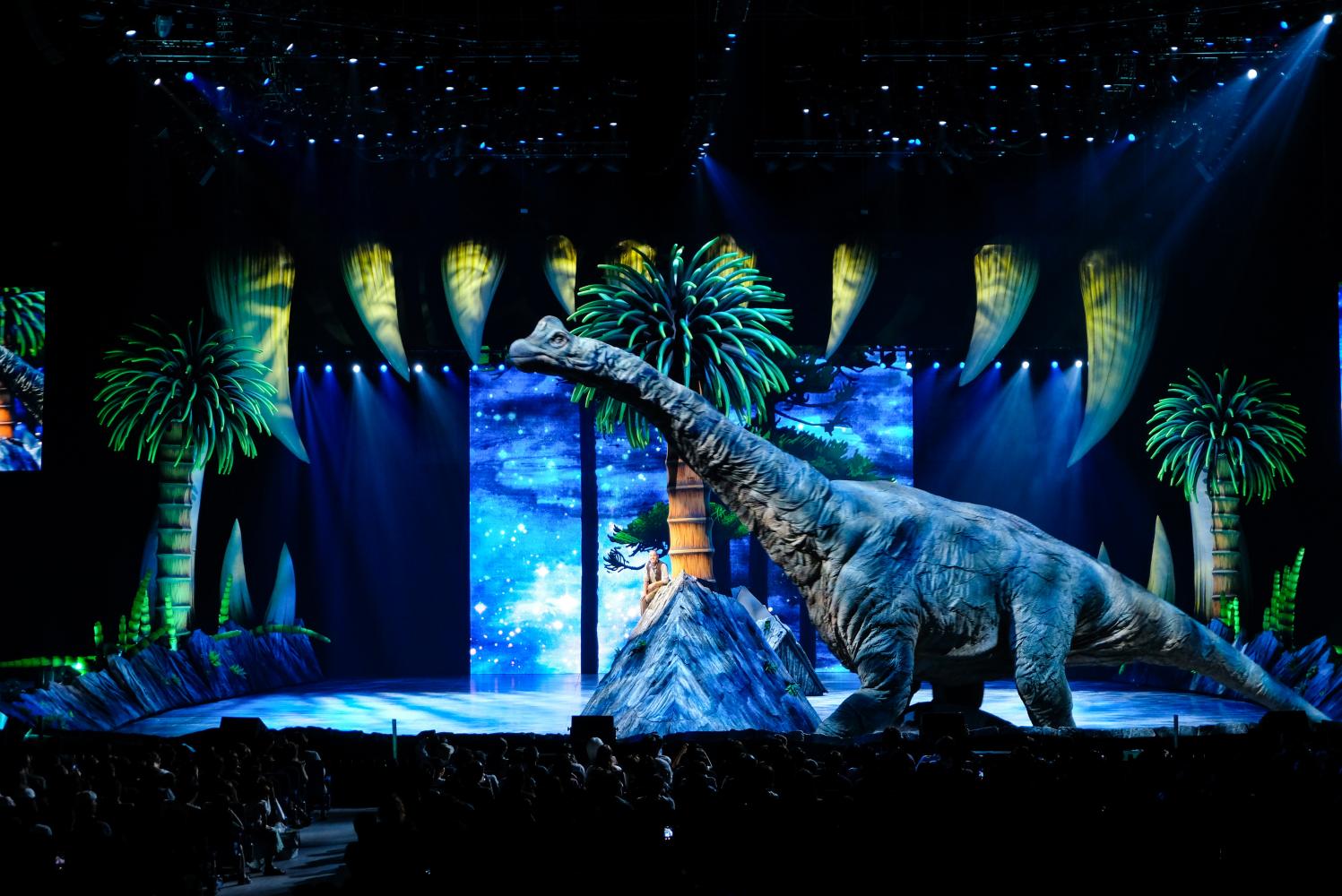 A Brachiosaurus towers above the crowd.

The crew behind The Arena Spectacular consists of 70 people. While Waller oversees the whole show, the responsibility for individual dinosaurs and all their movements falls on the shoulders of puppeteers and performers. Amanda Maddock, lead voodoo puppeteer, showed us around the voodoo station, which overlooks the stage and serves as a control centre for the giant dinosaurs.

Each large dinosaur weighs around 1,500kg, and is filled with hydraulics, cables, foam, microprocessors and a battery, while the exterior is covered with fabric and paint. Three people work together to manoeuvre one dinosaur. The driver sits inside, in a small space underneath all the mechanical parts and drives it around onstage. 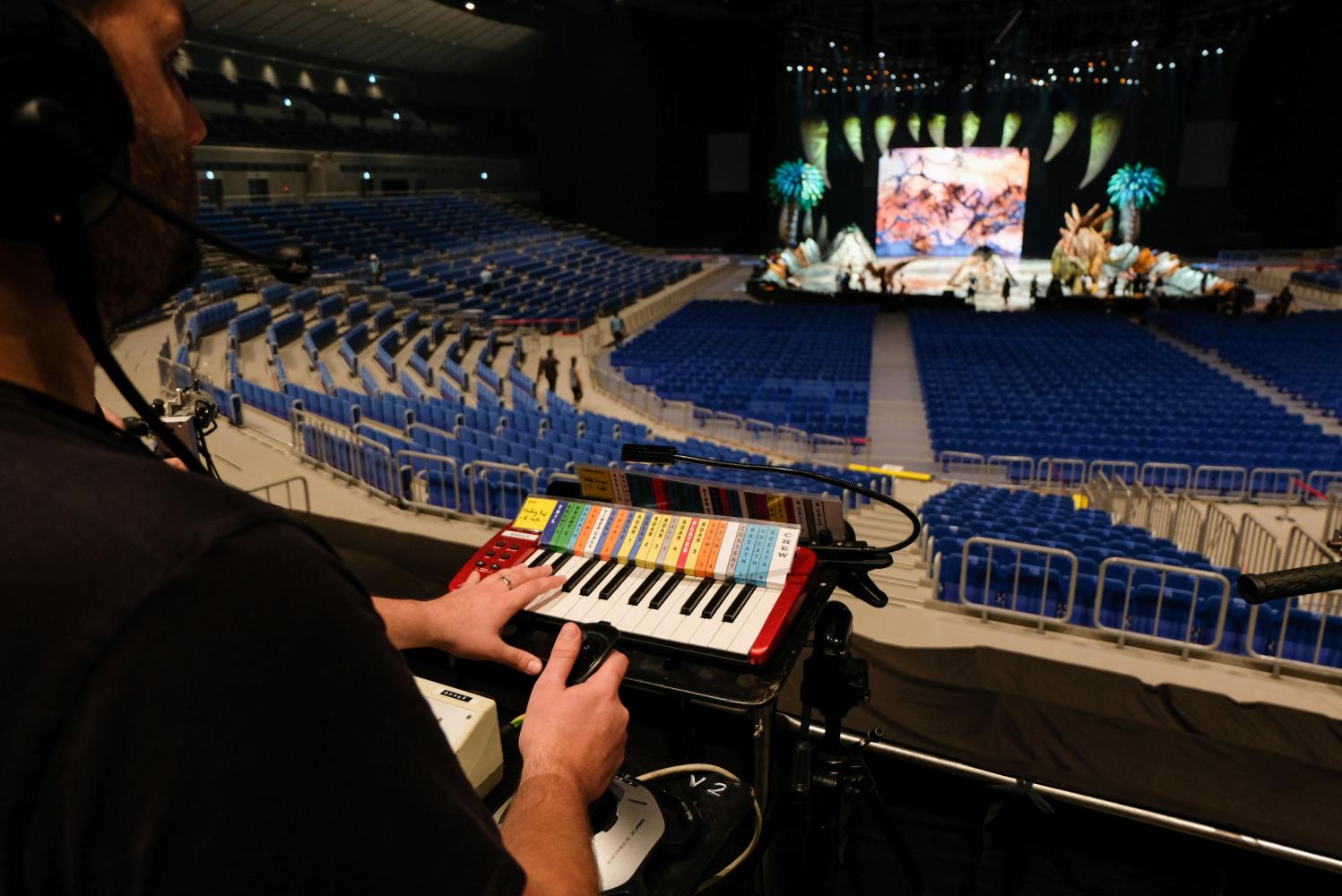 A staff member operates the auxiliary rig at the voodoo station to control the dinosaur's movement and sound. 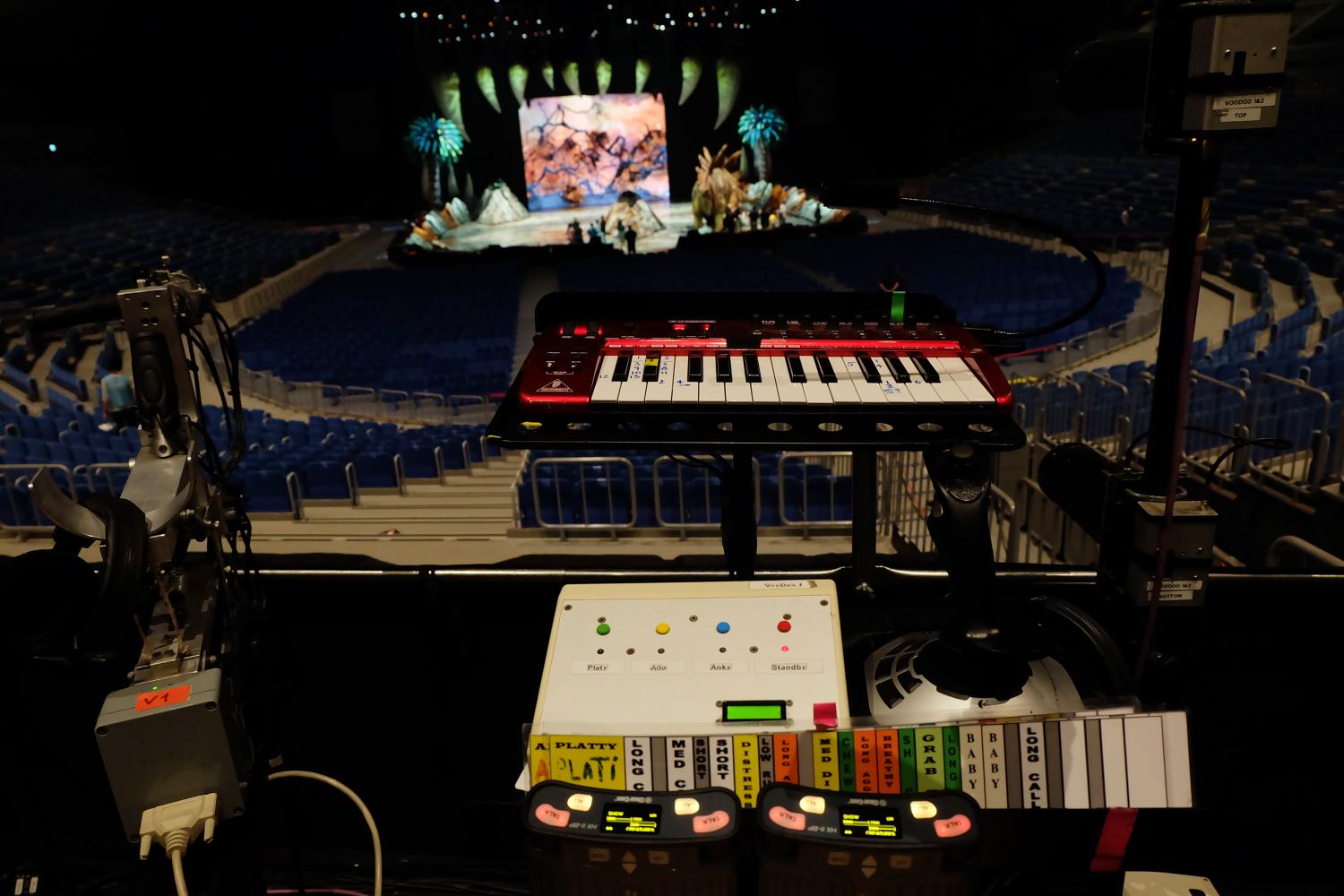 The voodoo station where large dinosaurs are controlled.

The other two members, known as voodoo puppeteers, control the dinosaur from the station. One puppeteer controls the lead rig to manipulate the main body, head and tail, while the other handles the auxiliary rig to control the mouth, eyes and sound.

The smaller dinosaurs are played by performers in heavy dinosaur suits. Matt Olver, one such performer, said the dinosaur costume weighs 30-50kg, depending on the species. As a result, each performer has to be extremely physically fit and trained to build up their strength, stamina and cardio to be able to handle the suit.

"We're all really fit," said Olver. "We eat a good diet. We work out together. And to translate that onto stage, we watch a lot of footage of other animals: how they interact, how birds communicate and how lions eat. We try to incorporate that into our dinosaur work to make [the movement] as authentic as possible." 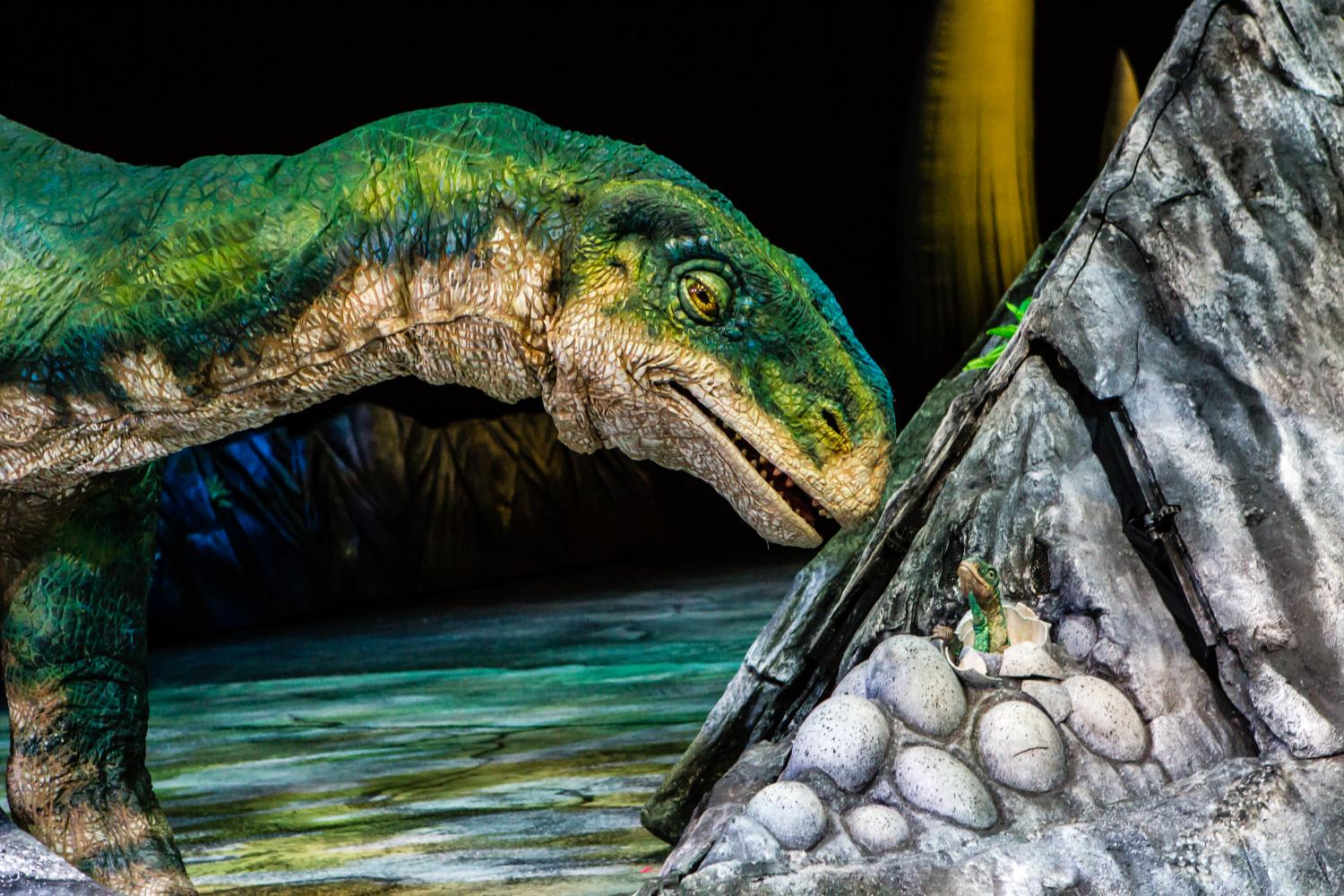 Plateosaurus checks on its hatchling. 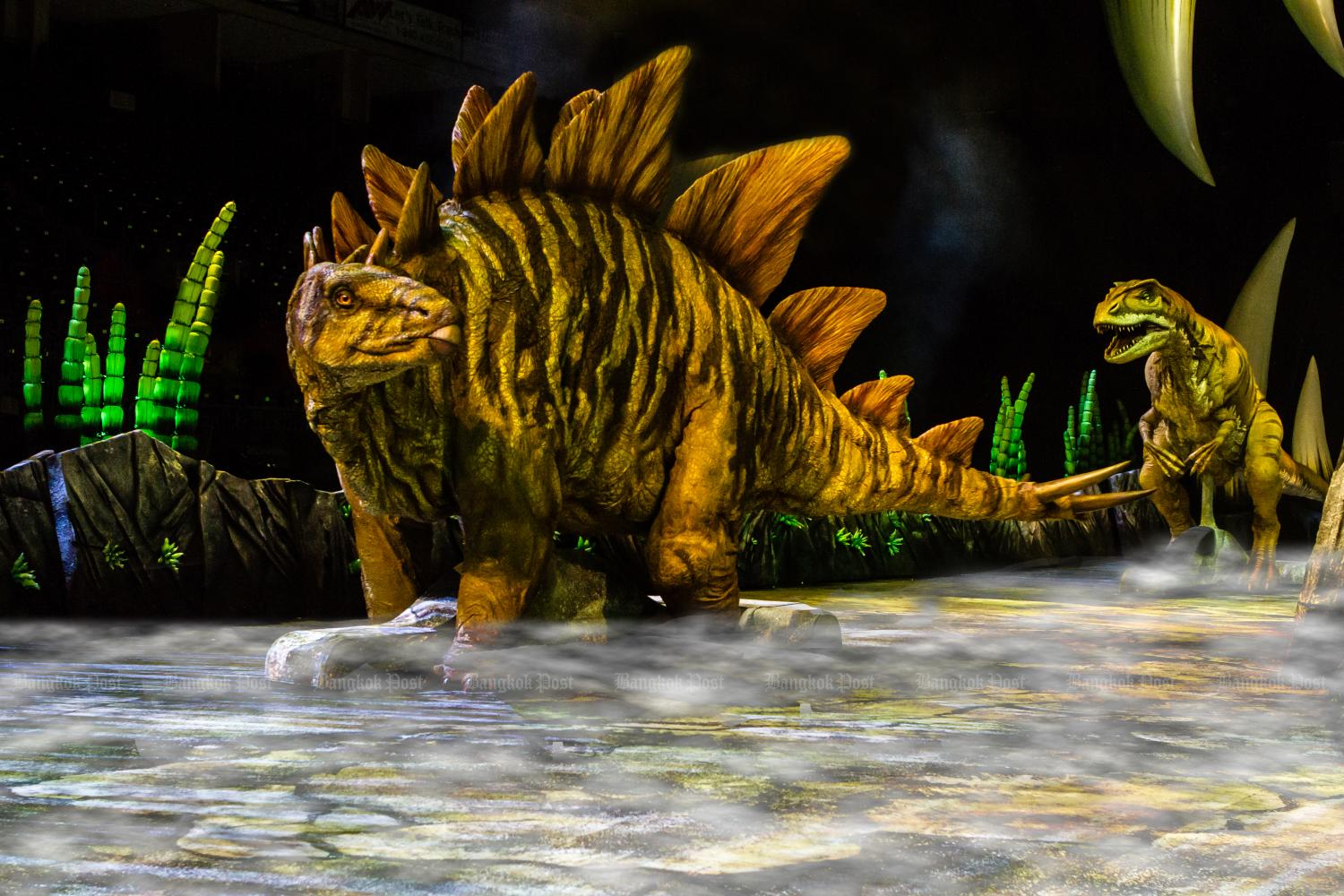 From within the suit, the performer can manipulate the jaws, eyes and noises that the dinosaurs make.

"They're all triggered from inside. We do all the puppeteering, sounds and expressions. Everything. We can even blink the eyes and flare them."

As for the tail, Olver gave a demonstration by shaking his behind comically. 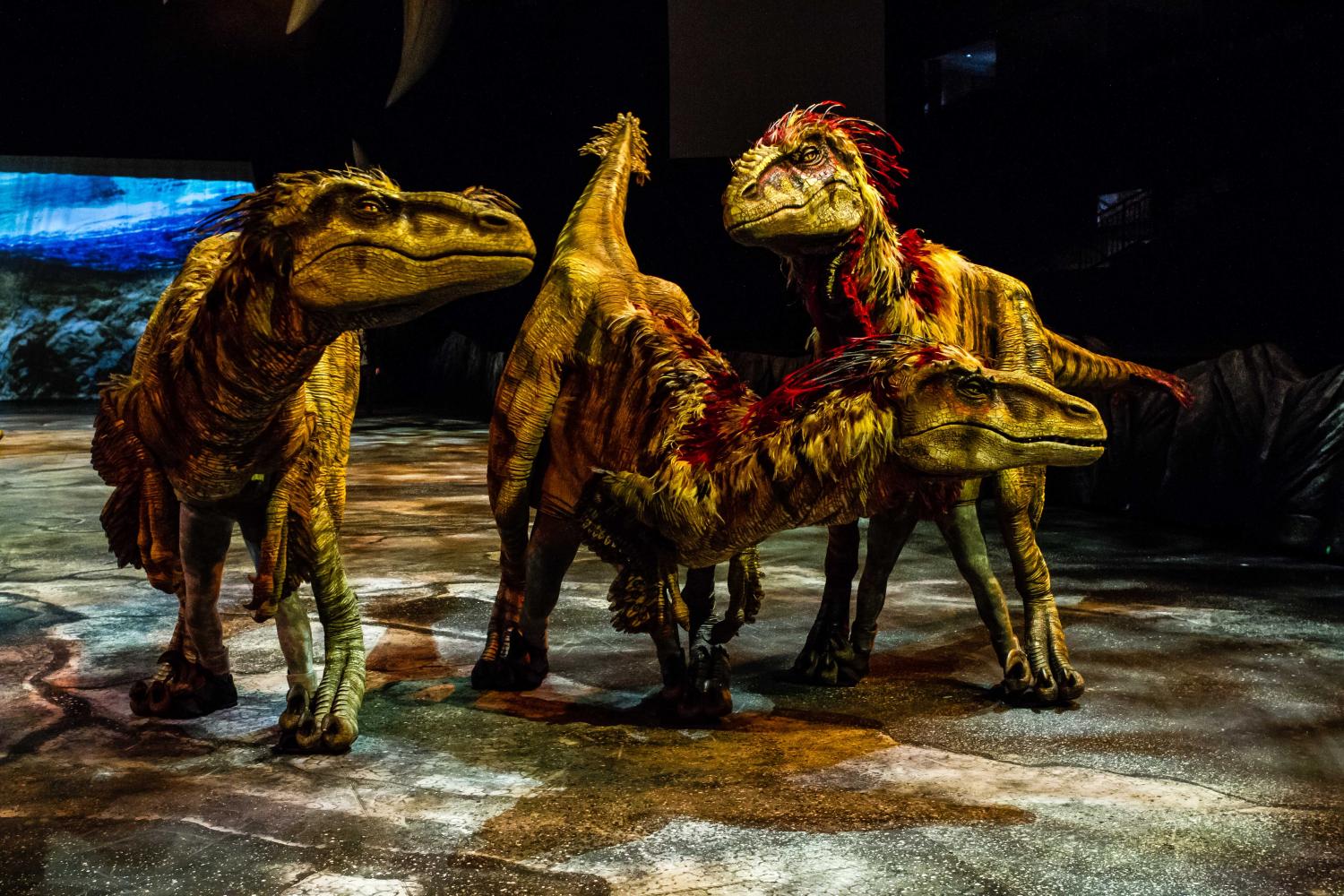 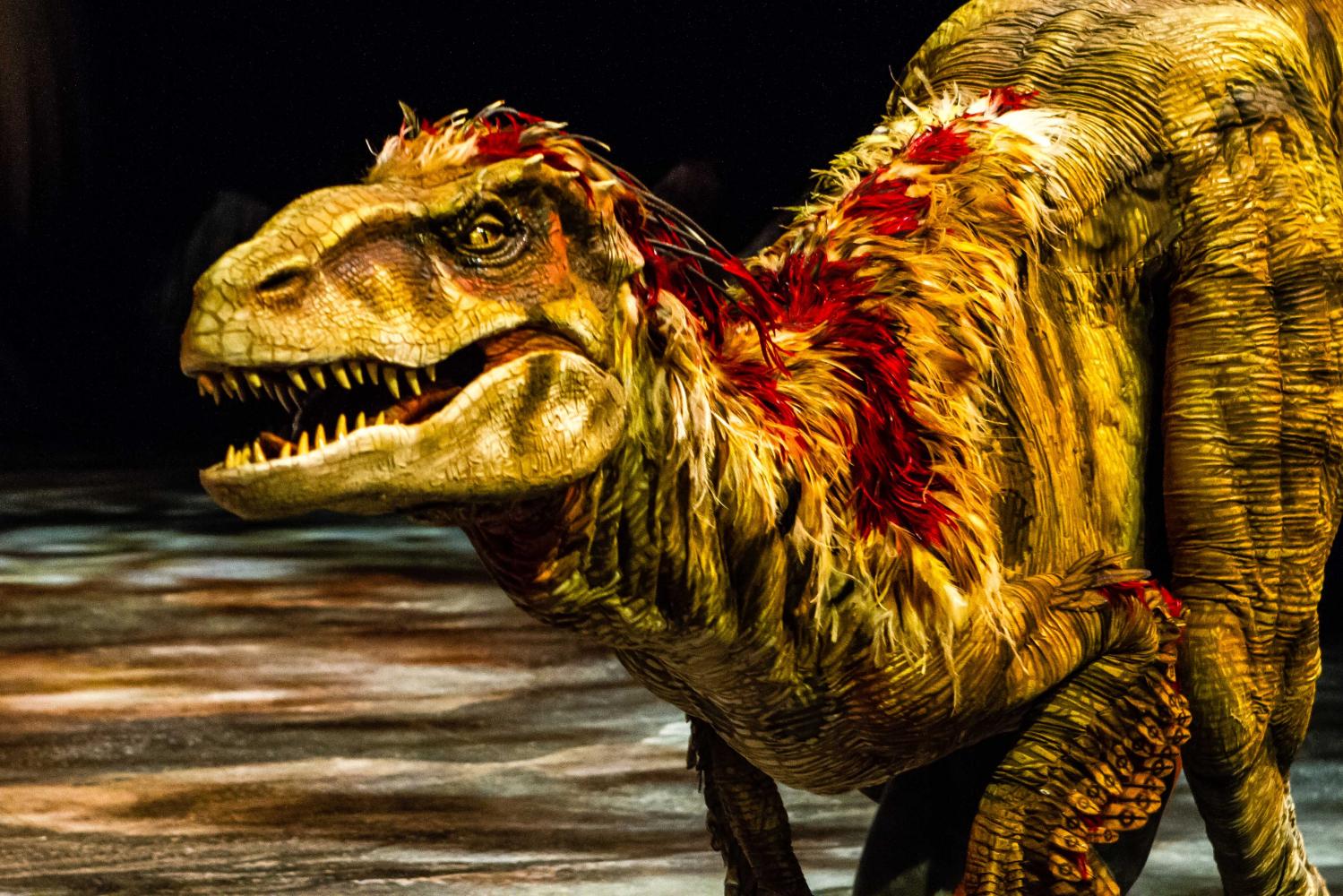 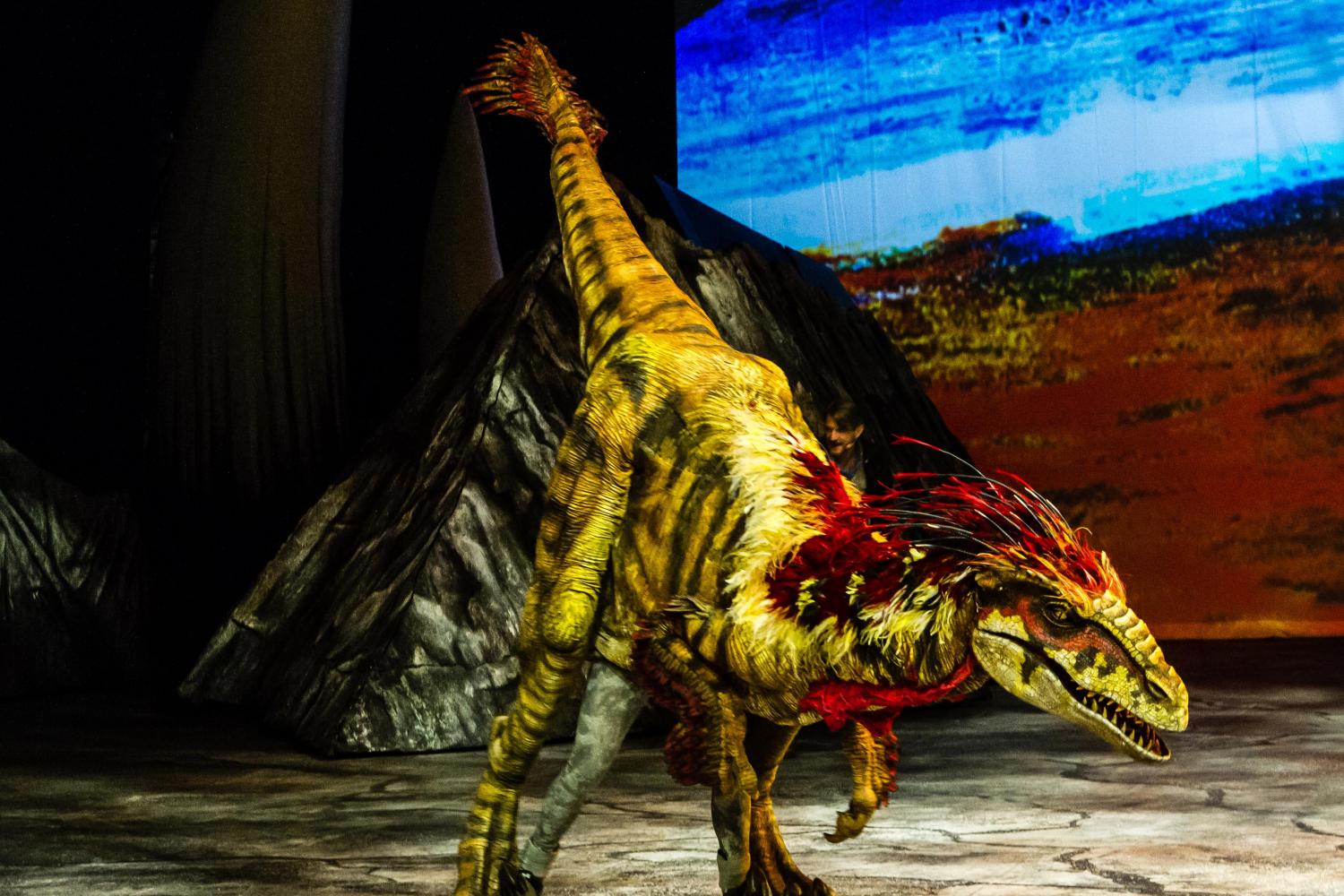 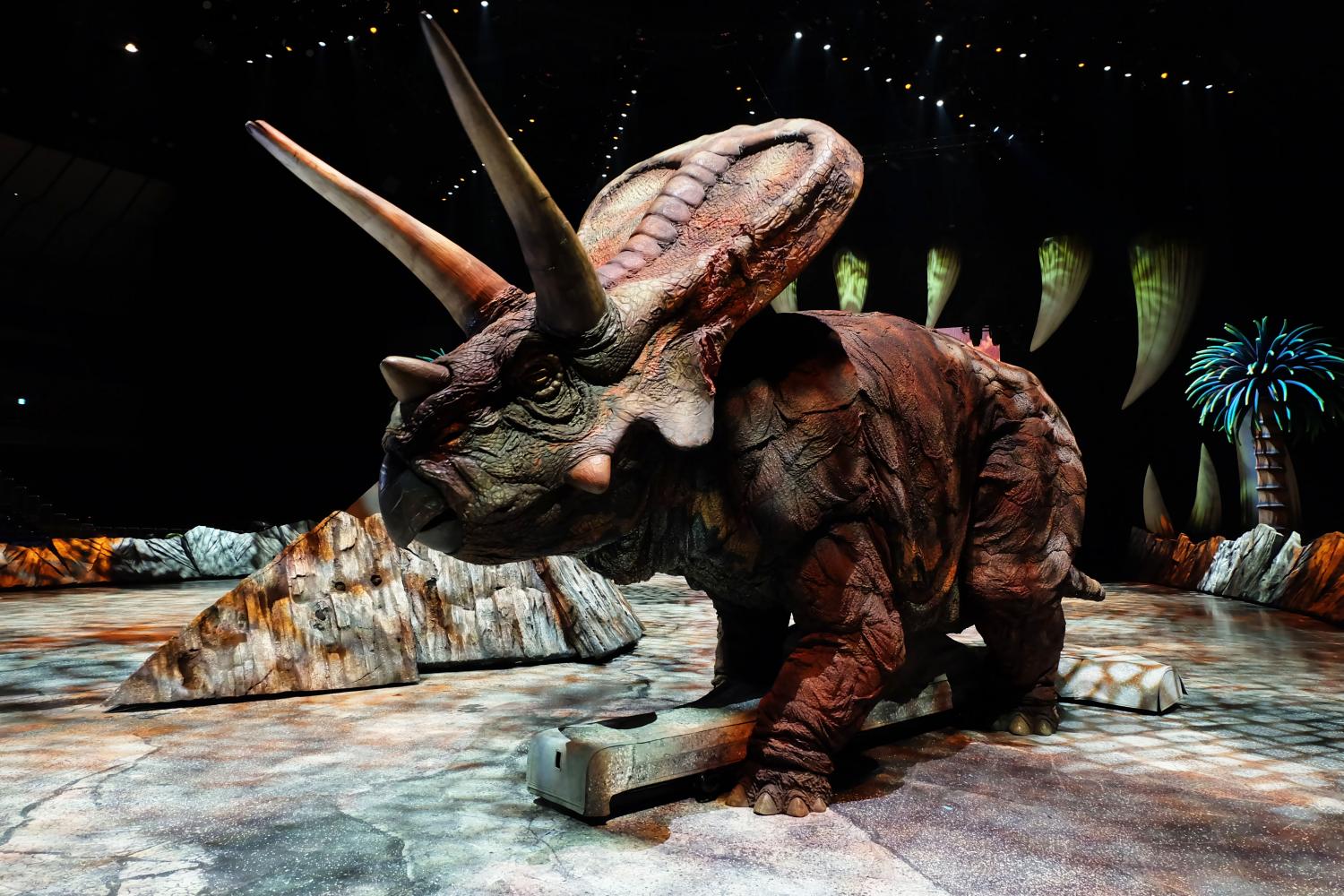 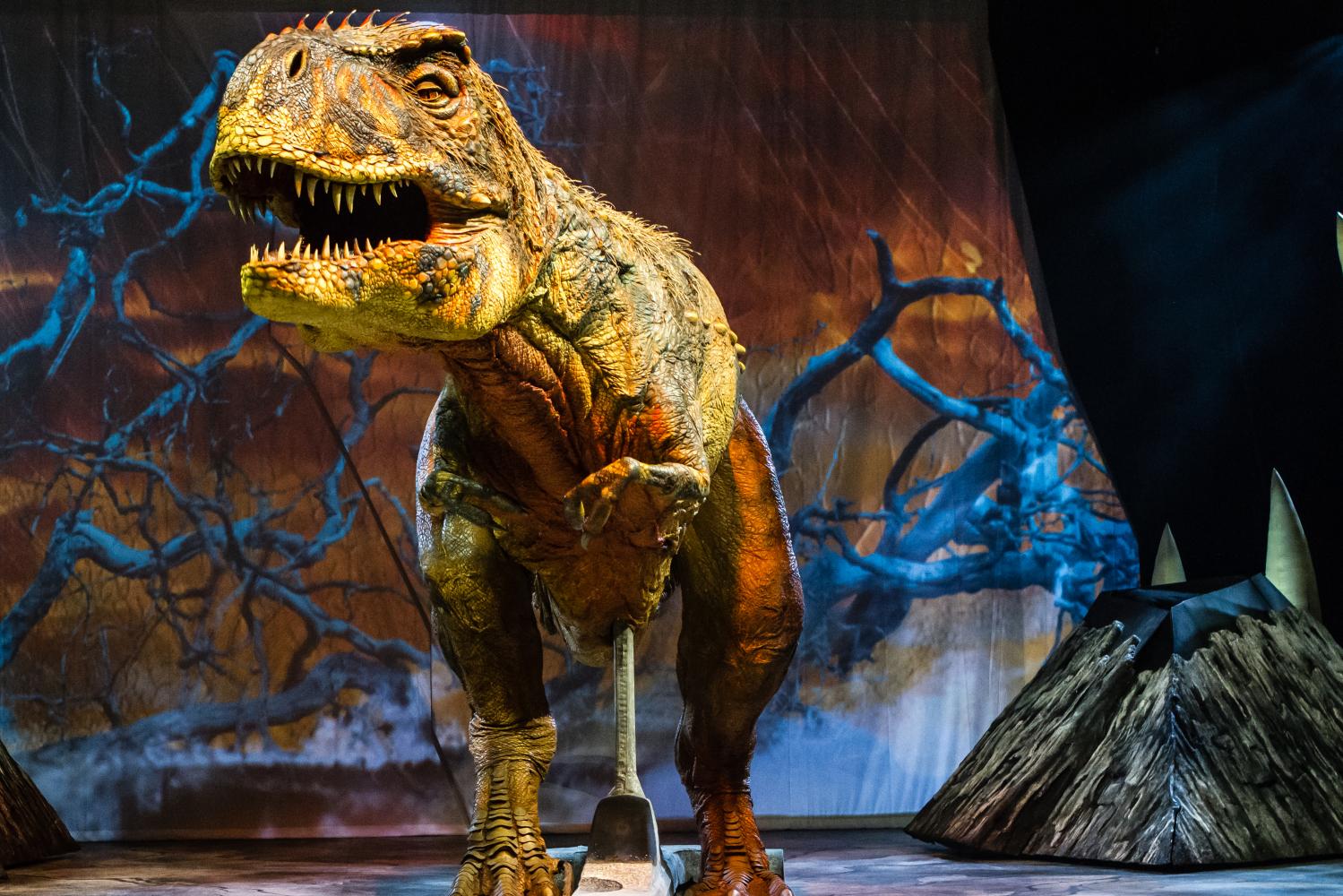 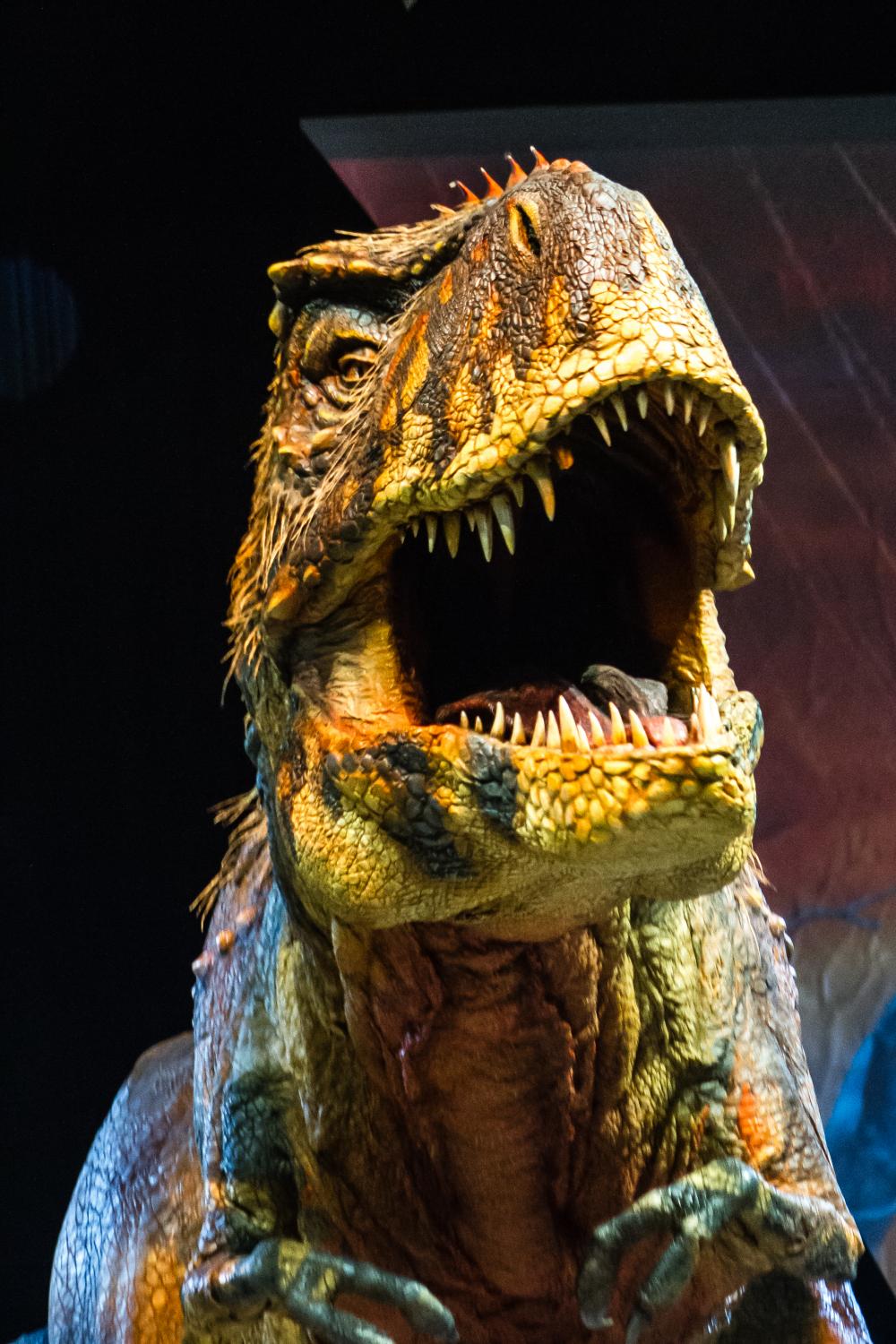 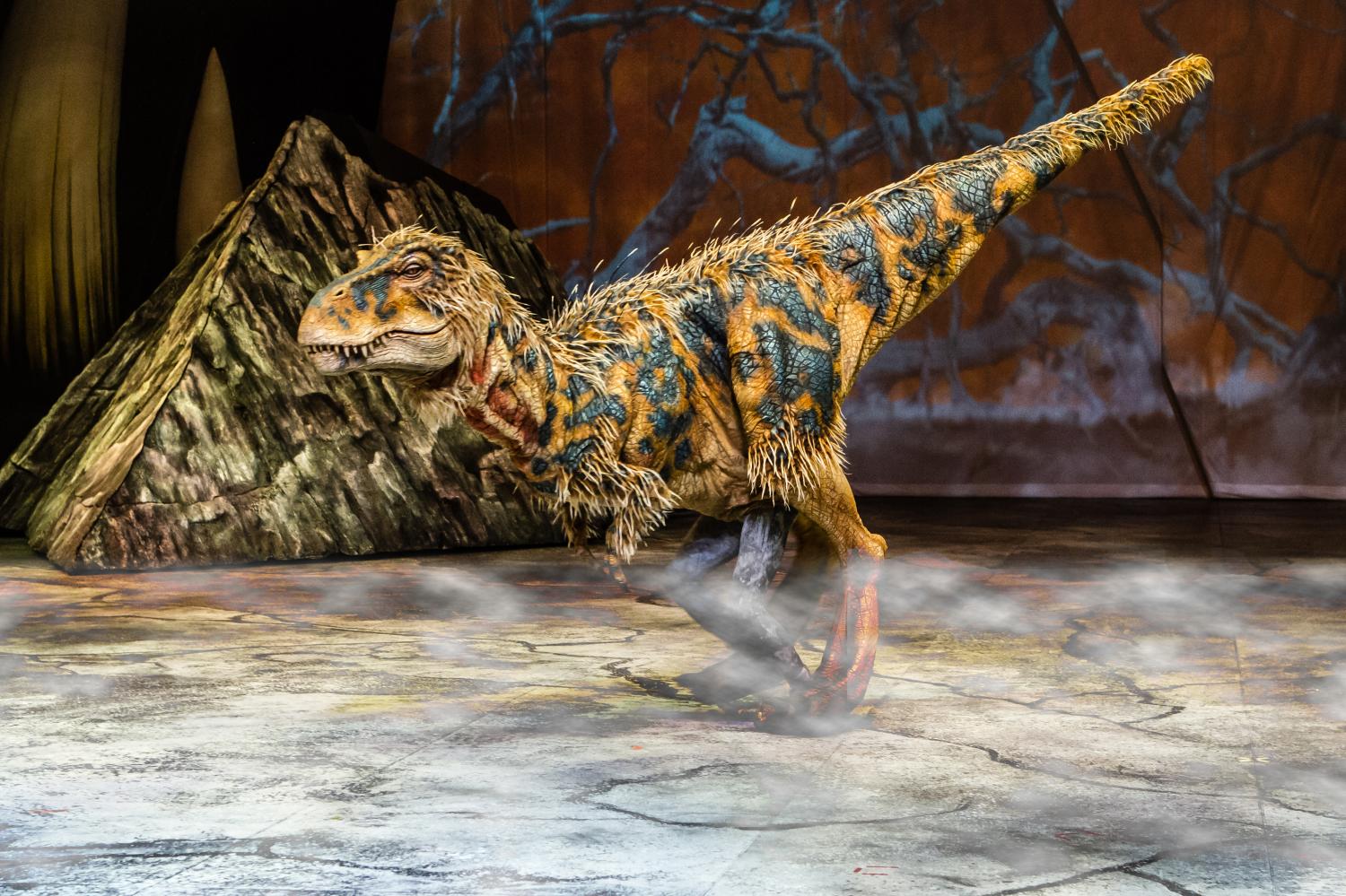 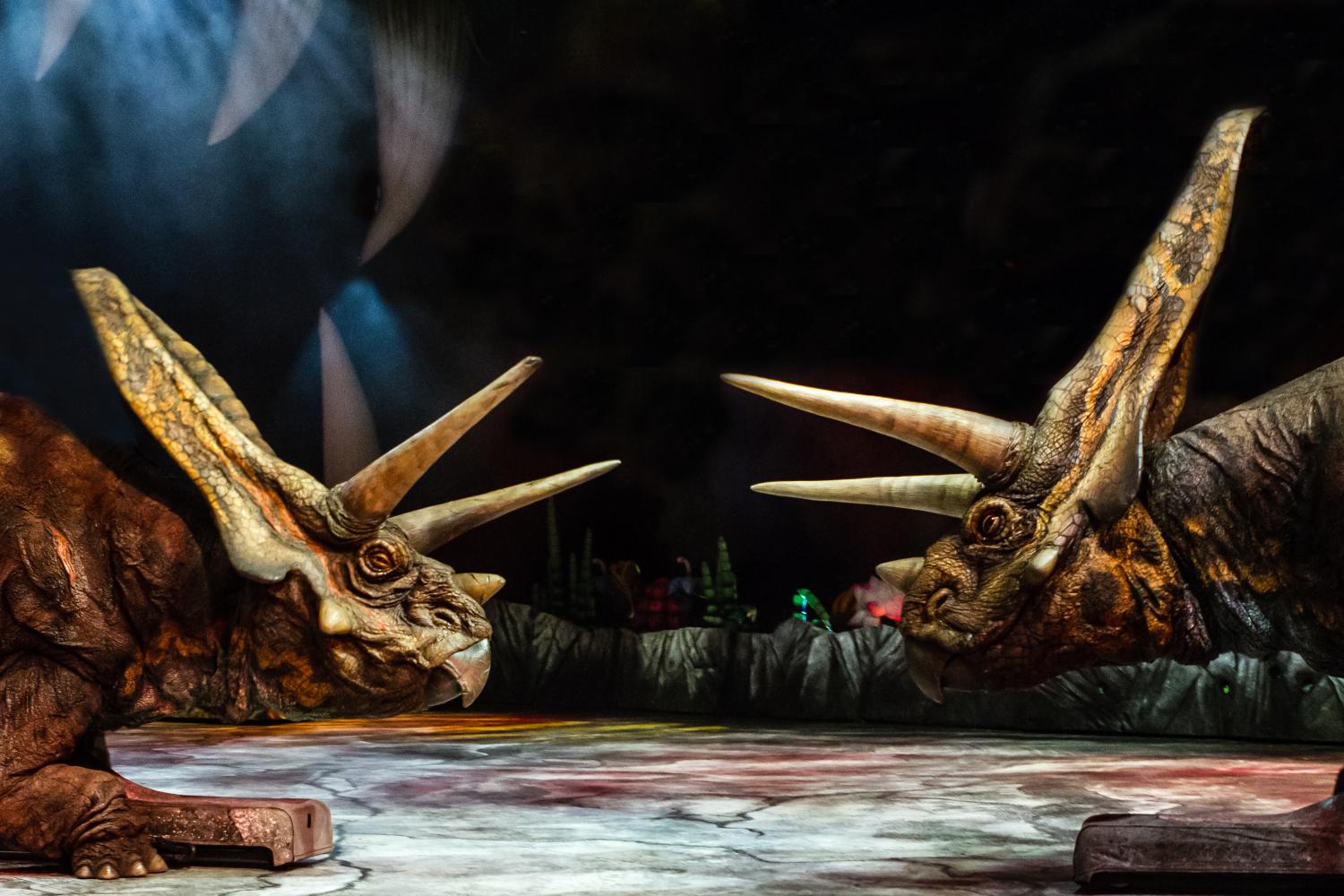 Two Torosaurs face one another. 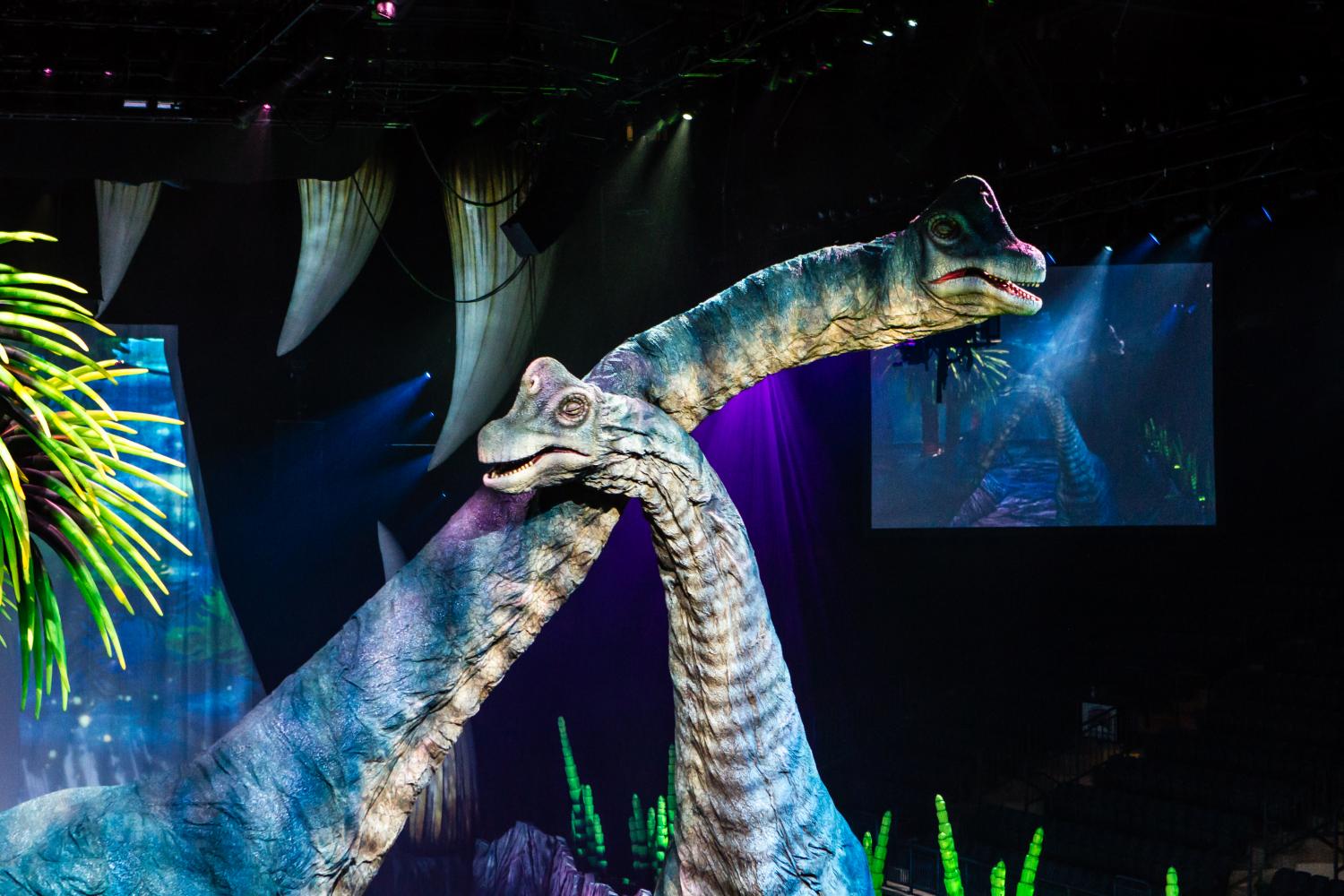