World Beat was out and about this past weekend to sample some locally made Latin music at Flamenco, a bar/entertainment venue in The EmQuartier on Sukhumvit Road. Flamenco is a fairly new venue, according to senior entertainment manager Anton Schutte. The bar is linked with another entertainment space, Escape Bangkok, found in the same building.

The main reason I went to Flamenco was to see a long-established but little-known local salsa band, Siam Cubano. I'd heard great things about the band, and they did not disappoint.

On Saturday nights, Flamenco has two salsa bands on stage. Supporting Siam Cubano was Buhonero Clandestino, also known as Conjunto La Ganga, which is the brainchild of Panamanian singer/producer Bernando Diaz. After working at his country's embassy here in Bangkok for three years, Diaz decided to stay and pursue his musical dreams. The band has only recently been set up, and it is truly multinational with a Brazilian guitarist, Filipino keyboard player (and musical director) and three locals on drums, bass and percussion, the latter of whom was very good indeed. 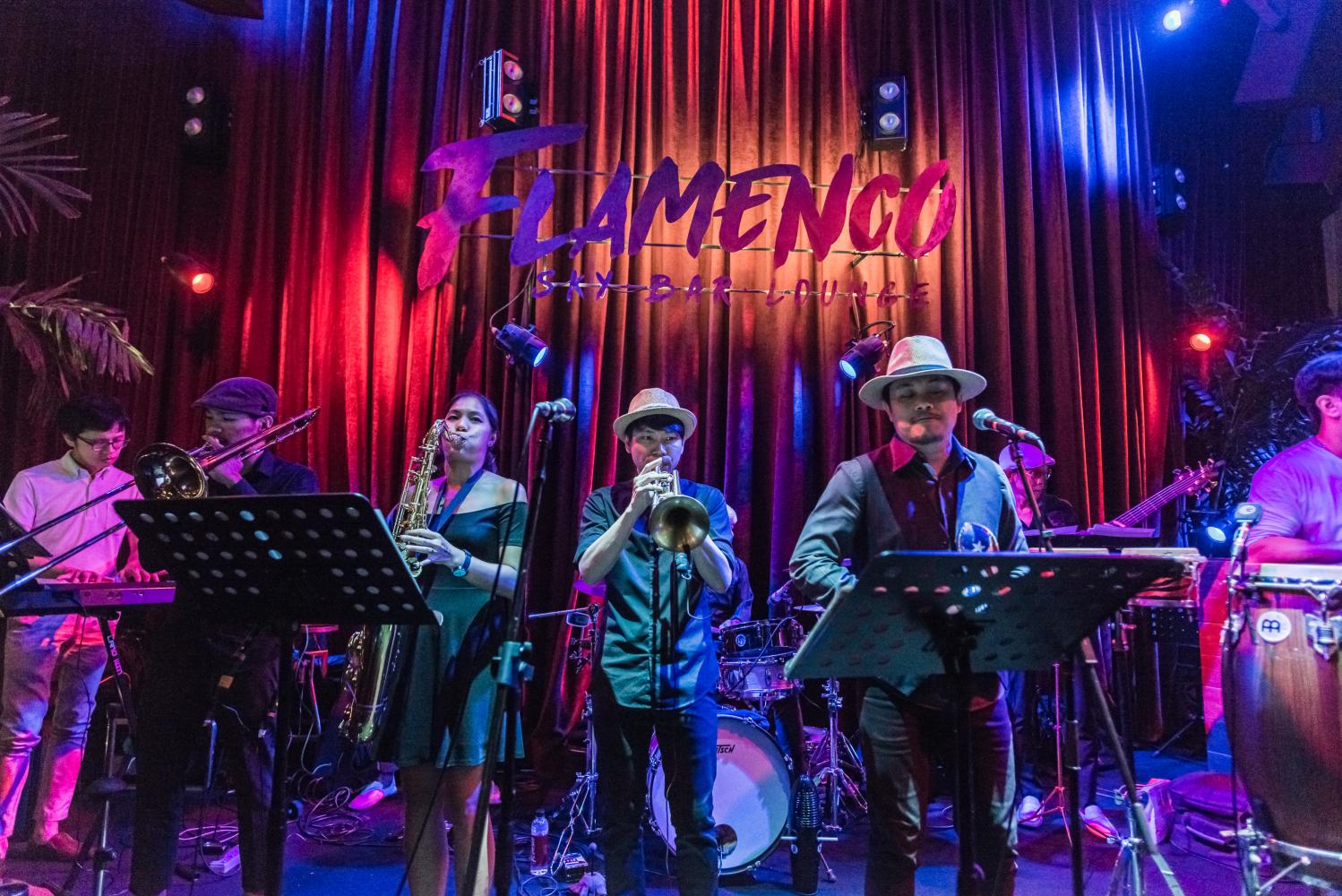 The band played two sets of salsa tunes and even a New York-style funk number, but the best song for me was about the heart and another well-known part of a man's anatomy, sung with great verve by guitarist Fabão.

Siam Cubano, a nine-piece ensemble who have been going for some 10 years, then took to the stage and delivered some high-class salsa. Veteran Latin percussion teacher Lester, one of the few original band members, told me that over the years they have changed personnel; most of the members are music teachers and played with other bands. The current version of the band seems settled right now and they have a really great authentic salsa sound -- I do hope they are considering recording an album.

The basic line-up was a little different to a typical salsa band: instead of percussion and singers dominating the front space, with brass behind them, Siam Cubano put their singer, trumpet player and saxophonist front and centre -- this allows for some great combinations between a very lively brass section and the vocalist.

Normally, you get the scent of Latin music in pleng luk thung (country music) and some molam, mainly with the sam cha (cha-cha-cha) rhythms and Santana-esque guitar licks. To me this can be very much a musical cliché, many Thai musicians don't seem interested in finding out more about Latin rhythms and how they might work when blended with local roots styles (that's why I recently wrote about Minyo Crusaders from Japan, who show how to incorporate Latin and African rhythms into a Japanese folk music mix).

But not so with Siam Cubano who play the real thing. Their two sets featured some all-action salsa, hot and heavy with great brass from trombone, trumpet and sax, and some driving percussion. They performed one or two excellent covers in a Latin style -- their version of Wham's Careless Whisper was a lot of fun.

The night's entertainment was excellent -- two terrific salsa bands and in between, dance classes for the mainly female crowd at the front of the stage (next time all you guys, get off your bar-stools and join the ladies!) 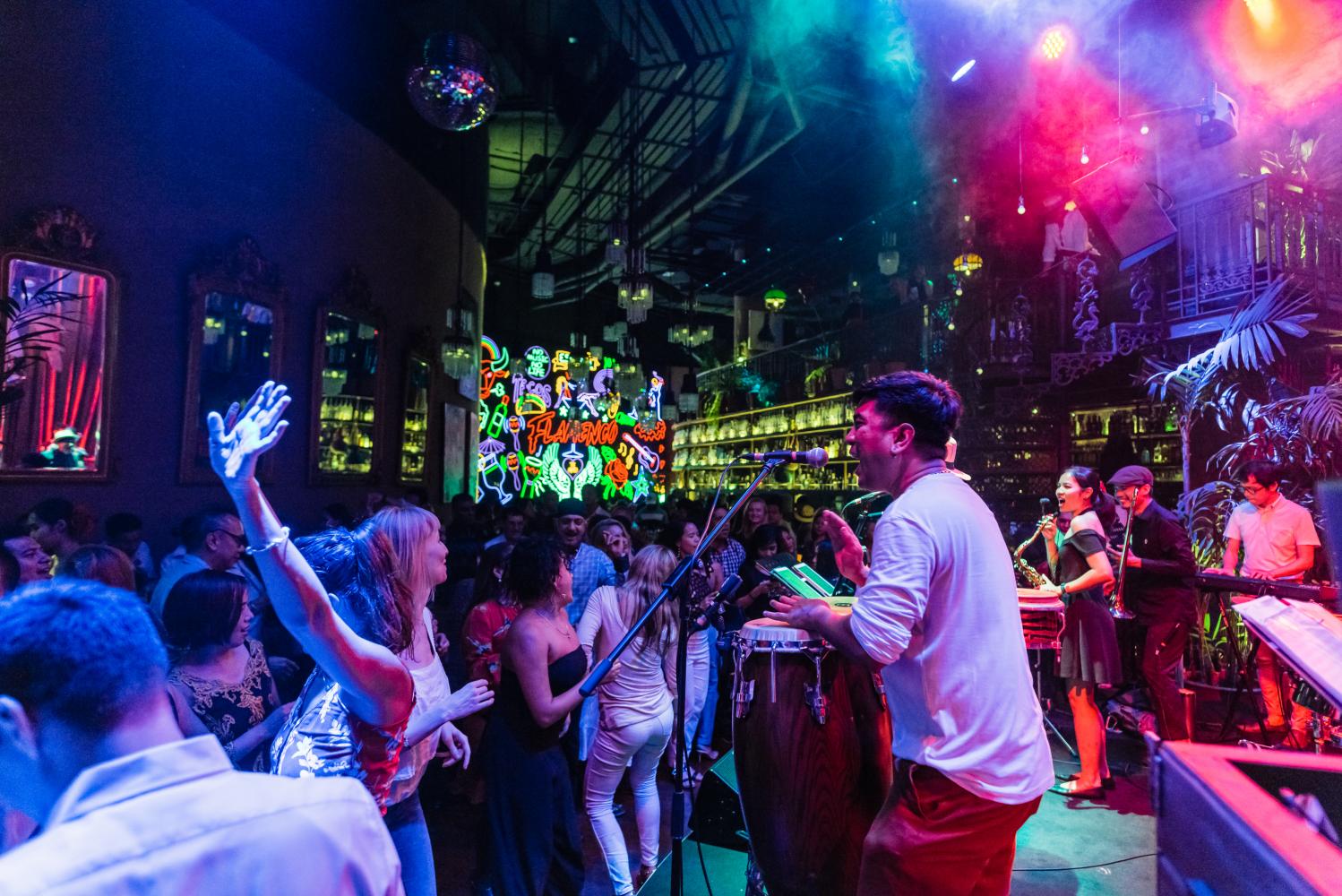 By the time the band began their second set, Flamenco was jam-packed with gyrating dancers (some of whom it has to be said were excellent dancers). I was a guest of Bangkok-based businessman Jorge Echevarria, who hails from Peru (via Australia) and he introduced to me to some of his Latin friends based in Bangkok; it's a small but lively community.

Echevarria has been in Bangkok for a few years now and has introduced cumbia to the Kingdom via a band he promotes from Australia, Amaru Tribe, an eclectic bunch of musicians set up by Melbourne-based Latin musician Oscar Jimenez.

Jimenez visited Thailand with a smaller version of the band and played a gig at Light My Fire bar with Isan musician Rasmee and fusion band Tontrakul earlier this year. The band's singer Katherine Gailer, who is also a painter, was invited to participate in a university workshop in Thailand and after sampling local music, it seemed natural that cumbia music should meet lam from Isan, hence the fusion gig with Rasmee and Tontrakul.

Amaru Tribe have collaborated with a wide variety of different bands and musicians, and have performed at important "world music" festivals like Womad Adelaide. They have released an eponymously named album, which includes a track that symbolised the band's approach, Cumbia Oceanica. As Echevarria explained, the band members are based in Australia and so the cumbia they play reflects the environment and cultures they now live and work in; as a result, you can hear local Aussie influences such as some deftly placed didgeridoo on some tracks. It works very well, too. 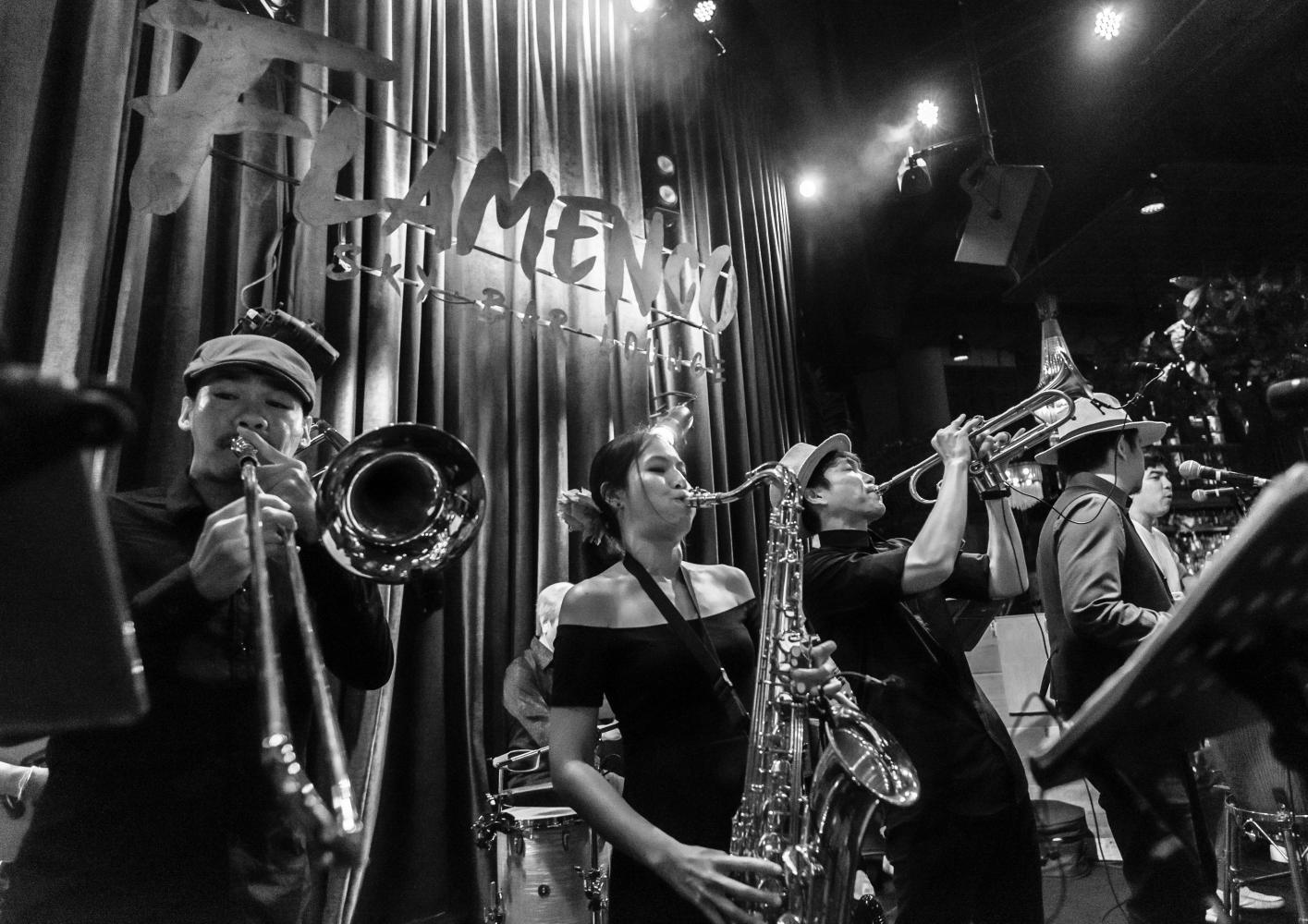 The full band is due to stop over for a night on Oct 23 and is looking for a venue to give a full-on cumbia performance and perhaps in the future to return and collaborate with a molam band. Cumbia and lam on the same stage? That would be a wonderful mix of Asia and Latin America and something I really look forward to.

There is much more to Latin music than cha-cha-cha and Carlos Santana and with Bangkok becoming more and more a melting pot of international cultures, I hope local promoters and musicians will pay more attention to a region that has some very exciting musical styles and genres.

Echevarria, who is also making a documentary about the journey of cumbia to different countries, has a dream: "I would love to see a molam band tour Latin America and play in a bar in Lima, and also a cumbia band perform in a Thai molam bar. That's my dream."

More information at amarutribe.com and buhoneroclandestino.com. Siam Cubano has Facebook page under their band name.