Art and antique collectors debate how they can support ethical trade

Popular culture tends to depict art and antique collectors as evil thieves who rob priceless treasures belonging to all of humanity. Nonetheless, many collectors and private museums say they collect for the purpose of preservation, because national entities do not have the capacity to safeguard rare objects from destruction by environmental harm and war, the actual thieves in their view. 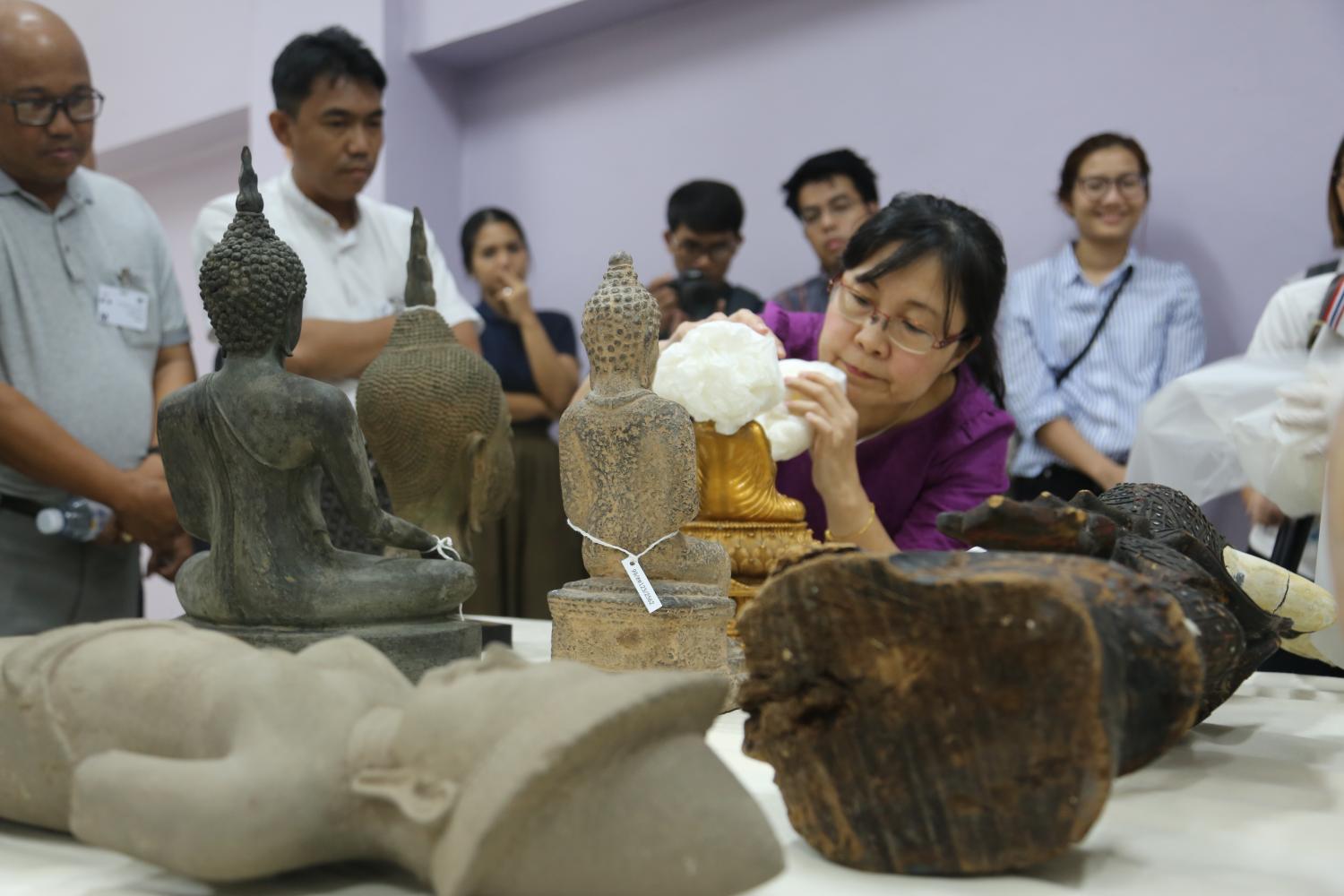 Collecting and trading undeniably involve making profits from cultural objects, but buyers and ethical traders' goodwill is the focus of a widespread discussion in antiquity trade circles, second only to how buyers can be certain that objects are authentic. While the issue of authenticity requires major scientific expertise, goodwill and ethical trade are intertwined in the legal aspects of acquisition, ownership and proof of good intention. Most importantly, what proves collectors' responsibility is their knowledge and records of the artefacts' provenance.

"Although it is not a new issue, the question of the provenance of objects -- ie, the list of their previous owners, what I would call a pedigree -- must be the main concern for today's collectors," said Isabelle Tassignon, curator of Fondation Gandur pour l'Art in Switzerland.

"Practically, this means that one must not buy objects sold 'in haste' or on websites escaping any control, but that one should only buy from galleries of internationally good reputation. One should also be cautious during major fairs, such as TEFAF [The European Fine Art Fair], BRAFA [Brussels Art Fair], the Fine Art Asia Fair, etc. Even if the preliminary vetting of these big fairs has improved, there is still a lot to be done."

Last month, at the Exclusive Collector Forum 2019 in Bangkok titled "What To Look For When Buying A Work of Art?", Unesco invited experts in the fields of private law, international treaties, auctioning and governmental measures to discuss the connections between knowledge of provenance and value added to artefacts with art and antique traders and collectors. Unesco, together with River City Bangkok, organised the event, attracting collectors, dealers and auctioneers attending the River City Bangkok Auction House the next day.

Marina Schneider, a senior officer at the International Institute for the Unification of Private Law (UNIDROIT), who travelled to the forum from Rome, said the majority of the objects in the market in Asia were from the region. Nonetheless, observers have recently seen objects from other regions, including Africa, the Middle East and Europe, increasingly available for sale, which presently seem more popular among collectors. "And where there is demand, there are efforts to supply. This also means the potential increase in sales of suspiciously acquired artefacts," she said. 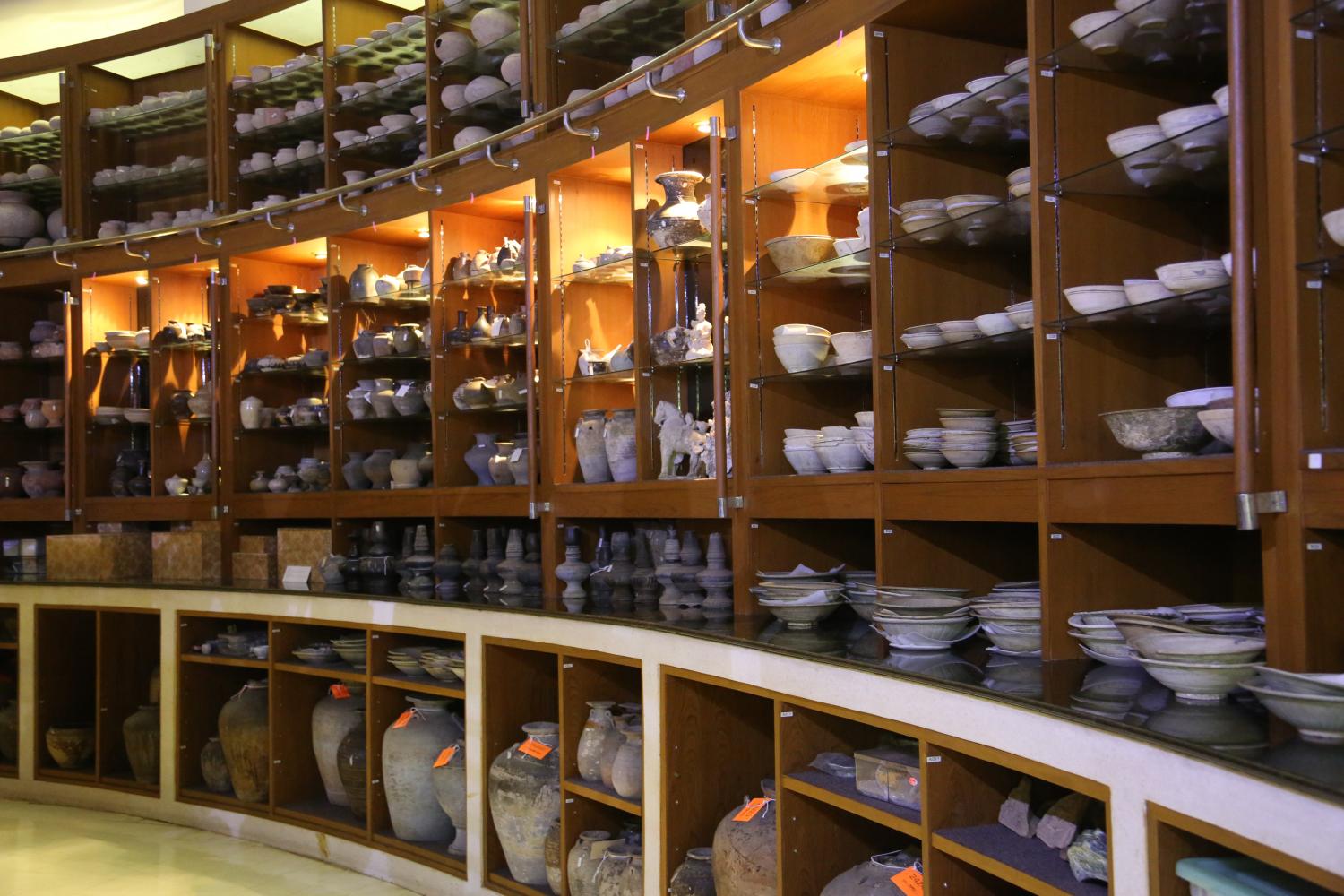 "The art market exists [because] this is important economically for the country. Therefore, it must be protected. The art market, therefore, must be legal. But that is not enough. It must also be ethical," Schneider said. "However, ethics and laws are not always changing at the same pace. Most of the time, unfortunately, the laws are behind, as social and cultural contexts evolve more quickly. How are art markets fed? By objects of legal origin, of course, but also of illegal origins."

Illegal objects could come from intentional damage to monuments or sites -- such as looting -- or from natural damage, including from climate change, floods and earthquakes. People continue to visit looted sites to steal objects and put them on the market. "The art market, legally and possibly ethically, should not cross that line of legality, because otherwise it is not an art market anymore -- it is a black market," Schneider said.

Collectors and art dealers should be cautious about the origins of the cultural objects they seek, said Etienne Clement, a Unesco expert on Law and Cultural Heritage.

"The UN Security Council had never dealt with cultural objects before. But in 2014, it was the first time that the Council declared clear evidence linking illegal movements of objects from Iraq, Syria and Sudan to terrorism financing. Indeed, trafficking of cultural objects is one of the sources that supports ISIS [the Islamic State of Iraq and Syria] and other terrorist activities in the Middle East and elsewhere.

"In a nutshell, there are a number of precautions that need to be taken before selling and buying ancient work of art," Clement said. 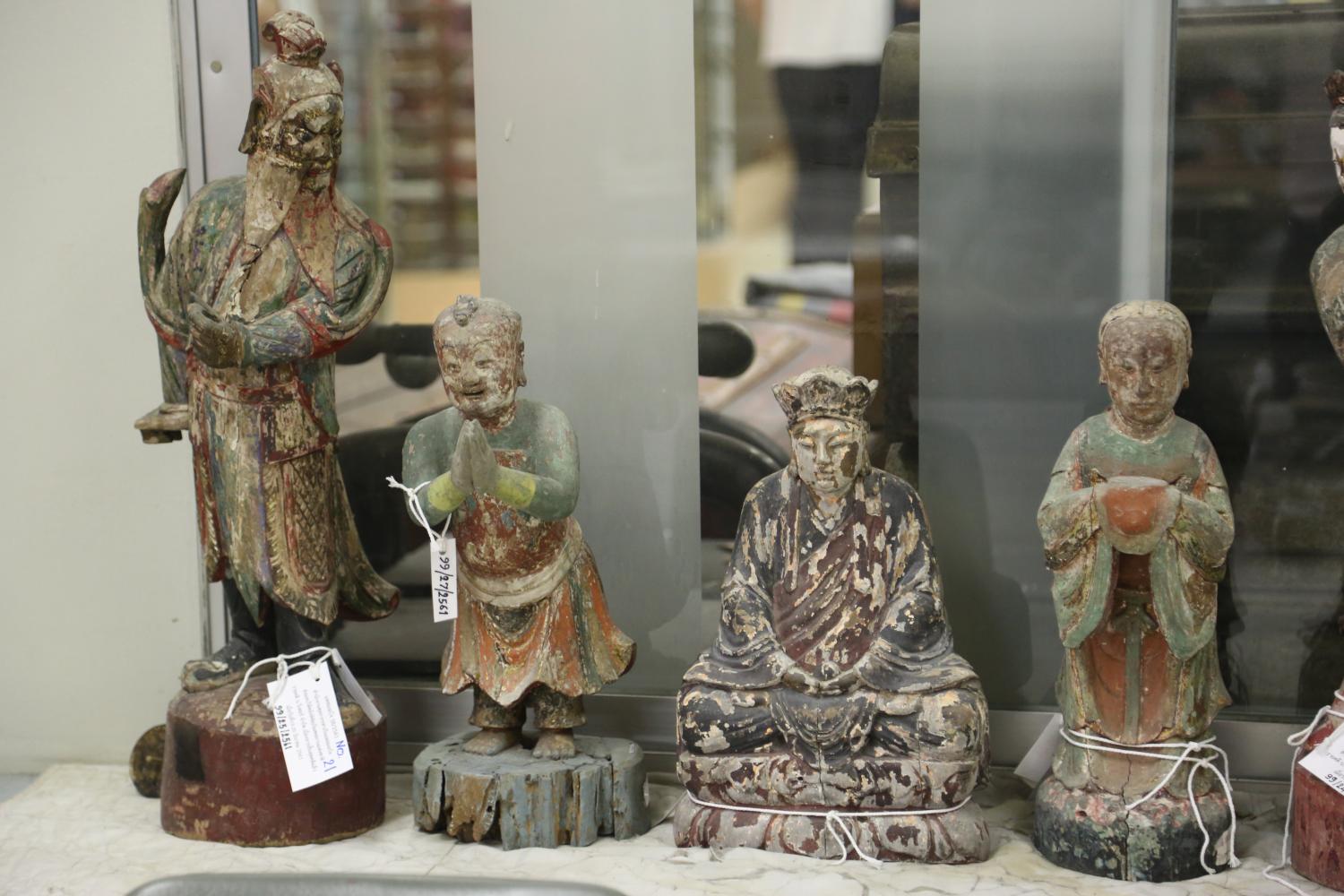 He pointed to resources such as the Interpol Database of Stolen Works of Art and Unesco Database of National Cultural Heritage Laws, both of which are easily accessible by the public. There are also several Red Lists compiled by the International Committee of Museums (ICOM) for different countries, indicating the types of objects that are considered endangered and should not be traded. In Thailand, antiquity dealers have to register for a permission to sell with the Fine Arts Department (FAD), with the lists of dealers that have FAD permits regularly announced in government gazettes.

The National Act on Export and Import of Goods (1966) is the first legal document that prohibits the export of religious statues and sculptures or fragments from the country. The Ministry of Commerce's 2004 notification on importing antiques originating in foreign countries also prevents the import of religious statues and icons, parts of archaeological sites, ancient money, ancient scriptures and documents, and prehistoric tools and accessories into Thailand.

Disapong Netlomwong, senior curator of the Office of National Museums, explained why there were so many national laws and regulations regarding the export and import of cultural objects. "Return and restitution is a very difficult and costly process for the country. We always need to raise funds, more than the actual price for which the object was sold, in order to get it back, and we do not know how many more times we will have to struggle in this process in the future."

Another government preventive measure is inventorying. Disapong said the FAD director-general could issue a gazette to register an antique or art object that was not in the government's possession to the inventory of valuable objects in the national territory, if the FAD considered it to have exceptional historic, artistic, social or cultural value. "The object still belongs to the owner or private entity. The inventory is only to ensure knowledge of the object's appearance and whereabouts," Disapong said.

During the panel discussion, many members of the audience raised concerns about the difficulties in seeking documentation for ancient objects they had acquired a long time ago, while experts insisted that such research efforts were necessary to determine whether someone had goodwill in the process of buying and owning ancient cultural objects. "Beyond the pleasure of enhancing a collection and in spite of the difficulties it may represent, buying objects ethically, documenting and publishing them are moral obligations, which you ought to fulfil," Tassignon said. "As for you, it is a way of honouring your commitments towards our common heritage."

Montakarn Suvanatap is an assistant programme officer for culture at Unesco Bangkok. 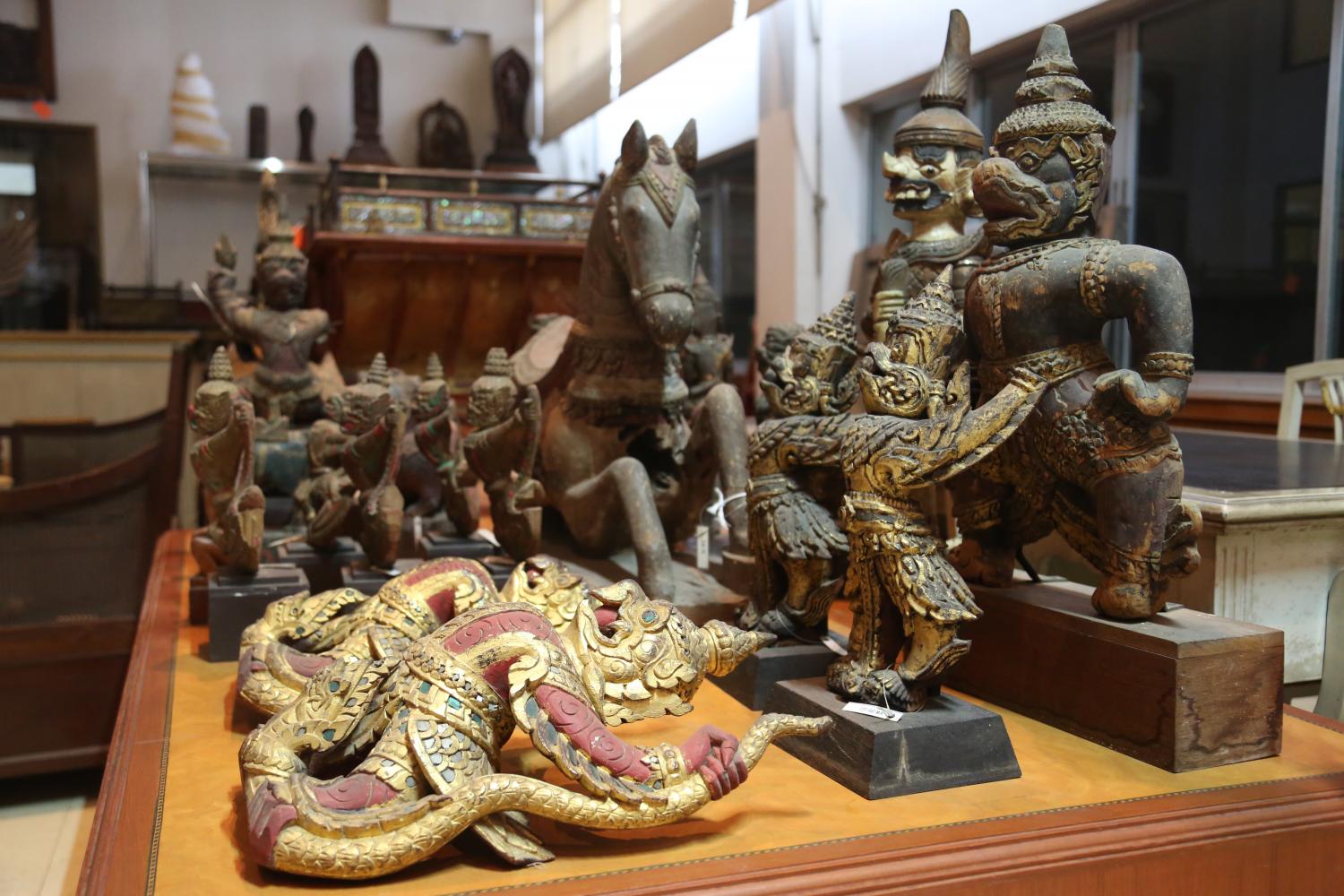