A view of different worlds

Three celebrated photographers speak with Life about their Thai-Korean projects

Thailand and South Korea established diplomatic relations on Oct 1, 1958. People from both countries are interested in the tourism, business and culture of the other, but there has been no Thai-Korean photography-exchange exhibition until the Korean Cultural Center (KCC) in Thailand organised the first display, "Phapthay Sajin", this month.

The exhibition's title comes from the words for "photos" in both the Thai and Korean languages. At the exhibition, there are five collections by five celebrated photographers from the two countries: Manit Sriwanichpoom and Suthep Kritsanavarin from Thailand; and Namhun Sung, Yoo Beylnam and Hakbong Kwon from Korea. Life spoke to three photographers about their projects.

Celebrated for photography that explores the lives of labourers and minority groups, Hakbong is the director and the curator of the exhibition. His collection "Nangfha" was originally called "Nangfha Look Back On Kingdom Again" in 2017. The 10 black-and-white photos depict a gorgeous angel visiting Sukhothai, the former capital of Thailand. After the old capital was abandoned, it was ruined, but its religious monuments made of brick and stone still survive and have collectively been designated a Unesco World Heritage Historical Park. 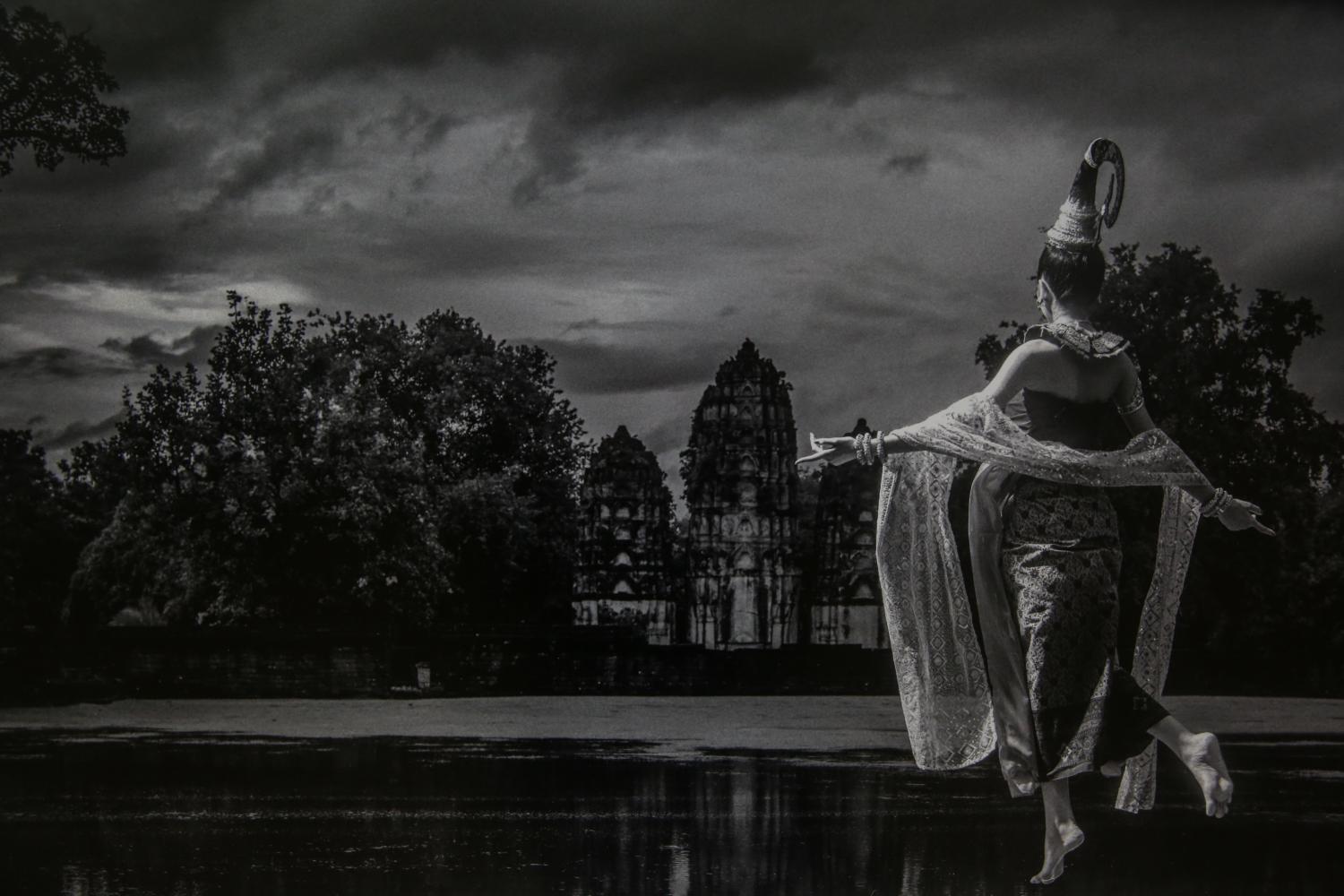 Left A photo from the collection 'Nangfha' portrays an angel visiting ancient Sukhothai.

Hakbong chose to convey the story of "Nangfha" to reflect Sukhothai at its height, though he personally doesn't believe in angels, he thinks Thai visitors may find it an interesting perspective about an angel from a foreigner.

"An angel reflects both the past and present. Unlike humans, angels have long lives, for thousands of years. The project depicts how an angel who saw Sukhothai in the past would feel if she came to see the ruined monuments in the Sukhothai of today," Hakbong explained through a translator.

To have the angel float in photos, the model had to jump in the air many times. The curator said the jumping idea was inspired by a collection that he saw in the French magazine Photo in 1997, but couldn't remember the name of the photographer.

"Jumping was the most difficult process on the project because we had only one model and she had to jump up every time I shot photos. After jumping for a while, the jumping height was less than the previous one. She then had to start jumping again and again. At the end of the day, the model slept and snored in the car on the way home," Hakbong said with a laugh.

The photographer has an interest in minority groups and his future project will portray a story about a minority group in Thailand.

"Minority groups don't receive attention from most people because their populations are small. In next two years, I plan to take photos of a minority group in Thailand who has to go to work in South Korea. Since they are foreign in both countries, I would like to portray how their lives will be."

Award-winning photographer Namhun Sung brought to Bangkok the collection "Lotus Well", which won in the portrait category at the 2009 World Press Photo Contest in Amsterdam. "Lotus Well" portrays novice nuns and Tibetans who practise Buddhism in an isolated monastery in the Himalayas. Namhun wanted to convey how Tibetans use Buddhism to sustain their culture, and whether there will be changes for the next generation in what novices learn. 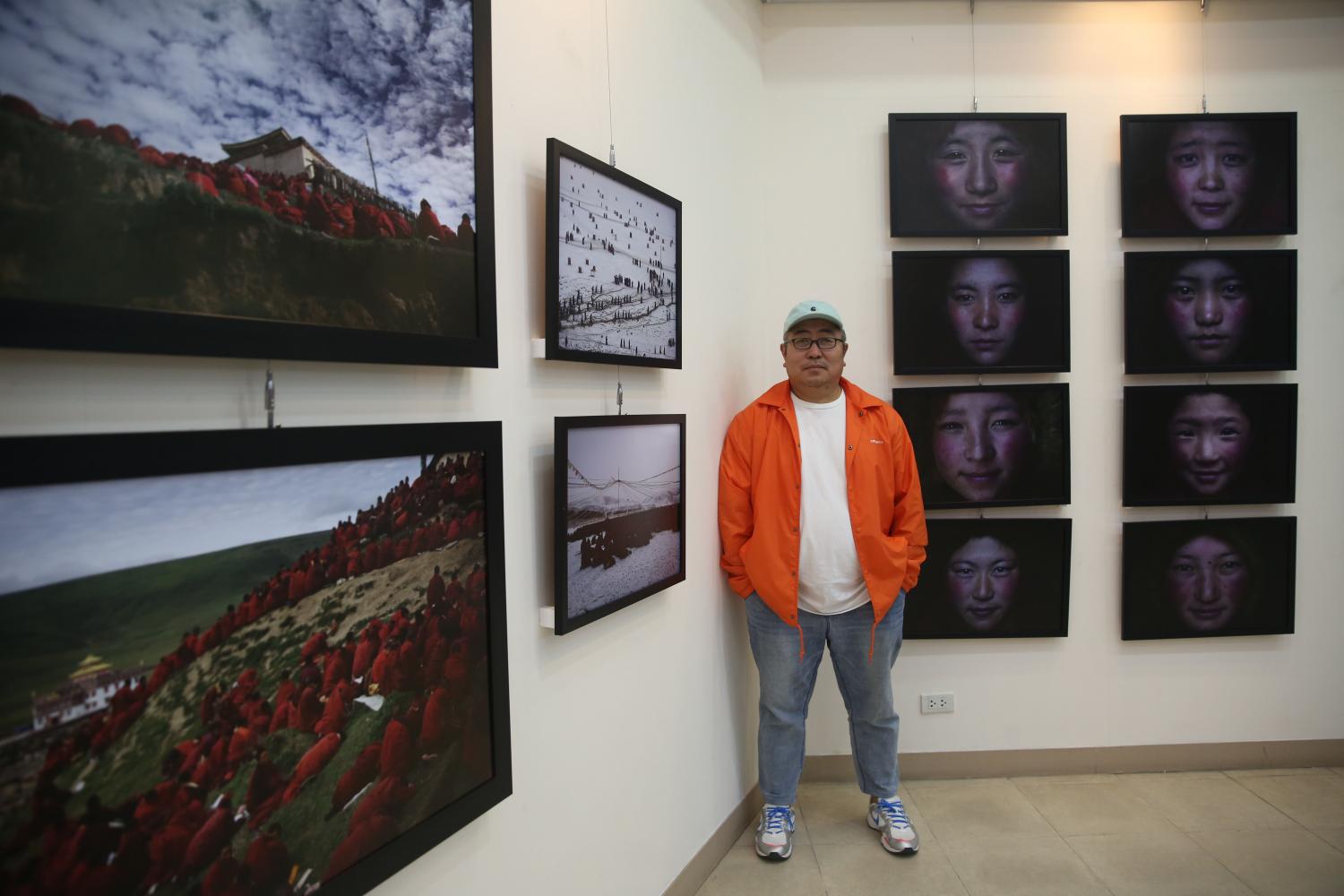 Below Namhun Sung brought the award-winning portraits from the collection 'Lotus Well' to Bangkok.

"Buddhism can't grow in northern Tibet because it is controlled by China, which limits the number of priests. Yet eastern Tibet has a renowned priest who attracts more than thousands of Buddhists to listen to his preaching.

"Many Tibetans collected their lifetime incomes to listen to the priest for a week. While listening, they never left, even if it was raining or snowing. After they listened to the preaching, I could see their great appreciation from their facial expressions. It was something that city people couldn't do. We couldn't leave everything in our life for one week," said Namhun.

To accomplish the portraits of novice nuns, the photographer visited Tibet twice. He was there in spring and winter. In spring, he was there with a local guide, but there was a rough road that caused an accident when the car lost a tyre. When he returned in the winter, the guide denied having gone with him. Namhun had to communicate with young nuns by himself.

"I couldn't speak their language, but I printed their photos I took the last time and used body language to ask them to act similar to in the photo. They were young and couldn't concentrate. It took time to take the photos.

"When I take photos of Asian people, I usually use side-lighting in order to create dimensions. However, side-lighting caused the faces of nuns to not look like Asian people. I had to figure out how to use lighting that can see both cheeks of the nuns, but their faces weren't flat. I'm glad that photos display another side of Tibet that people hadn't seen before," the photographer said.

Taken in the capital of South Korea in 2011, the celebrated Thai photographer said this was the first time that "Seoul 2011" has been exhibited. The black-and-white collection was taken at a walking street in Seoul eight years ago. Manit was surprised to see how South Korea was developed at that time. 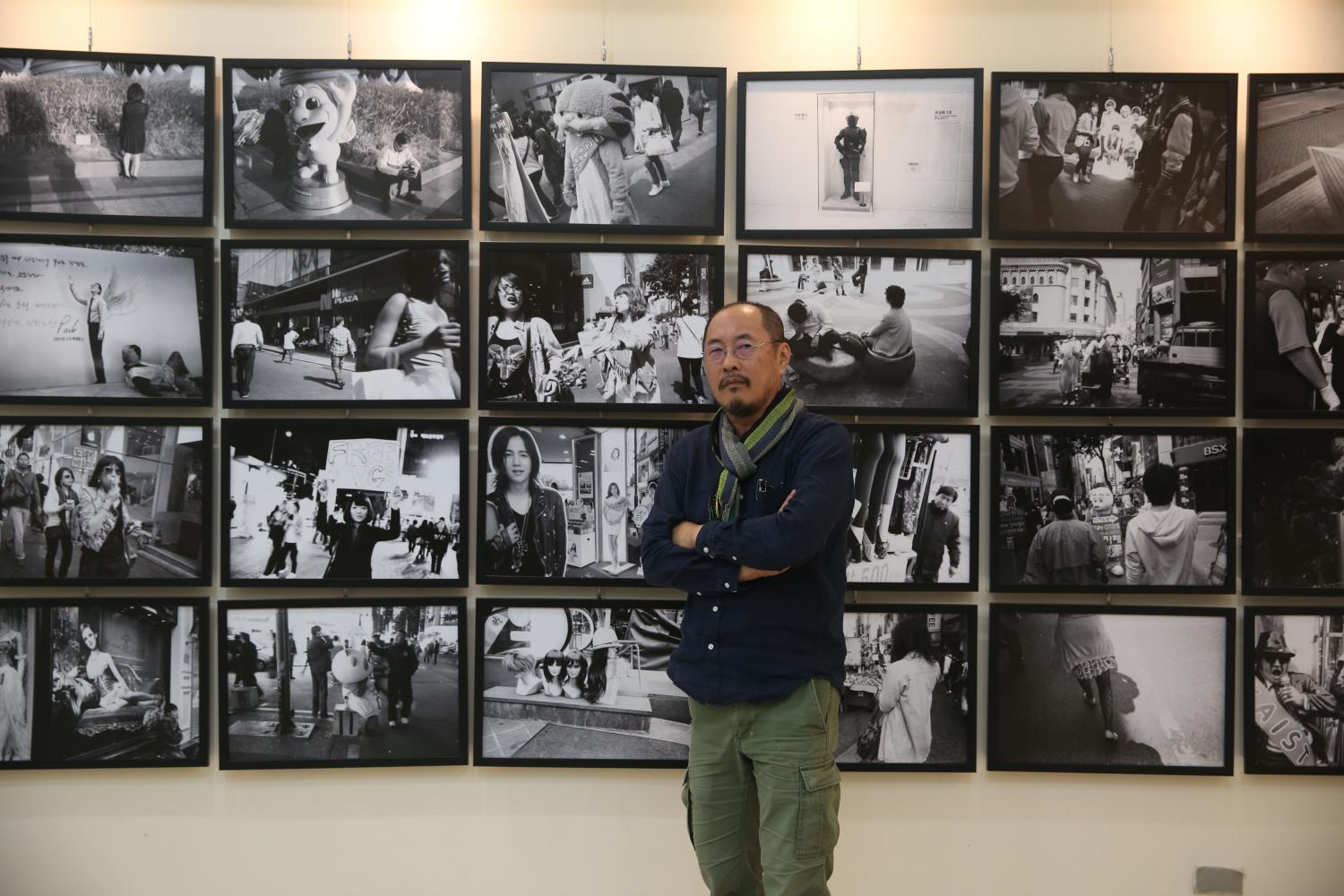 "In my memory, Thailand sent our military to aid them in the Korean War. I had images that they were starving. But they have been developed and have had an influence on our region. I'm impressed. I was at a walking street to see their development. What caught my eye was there were lots of cosmetic surgery clinics which also served men. It was a surprise because I had grown in the era when guys didn't care about our beauty," Manit said.

"At the opposite side of a clinic, there were nuns to sing and ask for donations. It was interesting to see one side of the street was concerned about appearances while the other side was concerned with letting things go."

A highlight of the collection is a photo of an old man lying down next to an advertising which depicts a photo of a male angel.

"I don't understand the language, but the old man looked like he didn't fit in with the modernised area. It is similar to many big cities where we can see things from old cultures. It reflects alienation between old and new things," said the photographer.

As a photographer, Manit enjoys walking through places to see changes and record them.

"I like to notice changes. It was like my duty to take photos of changes. My collections, 'Bangkok In Black & White' and 'Technicolor Noir', are photos of how Bangkok changed from an agricultural society to a metropolis and to an information-technology society." 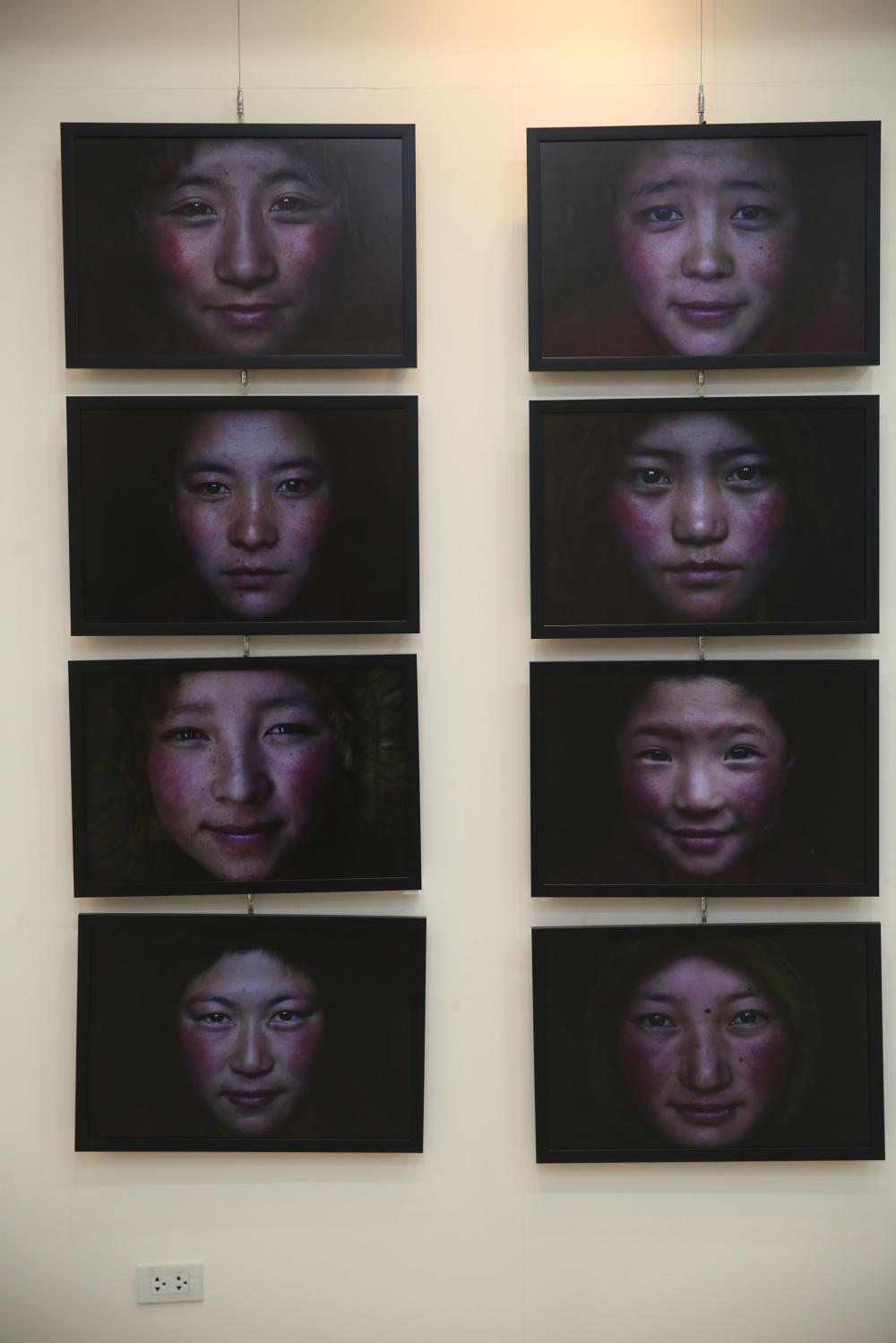 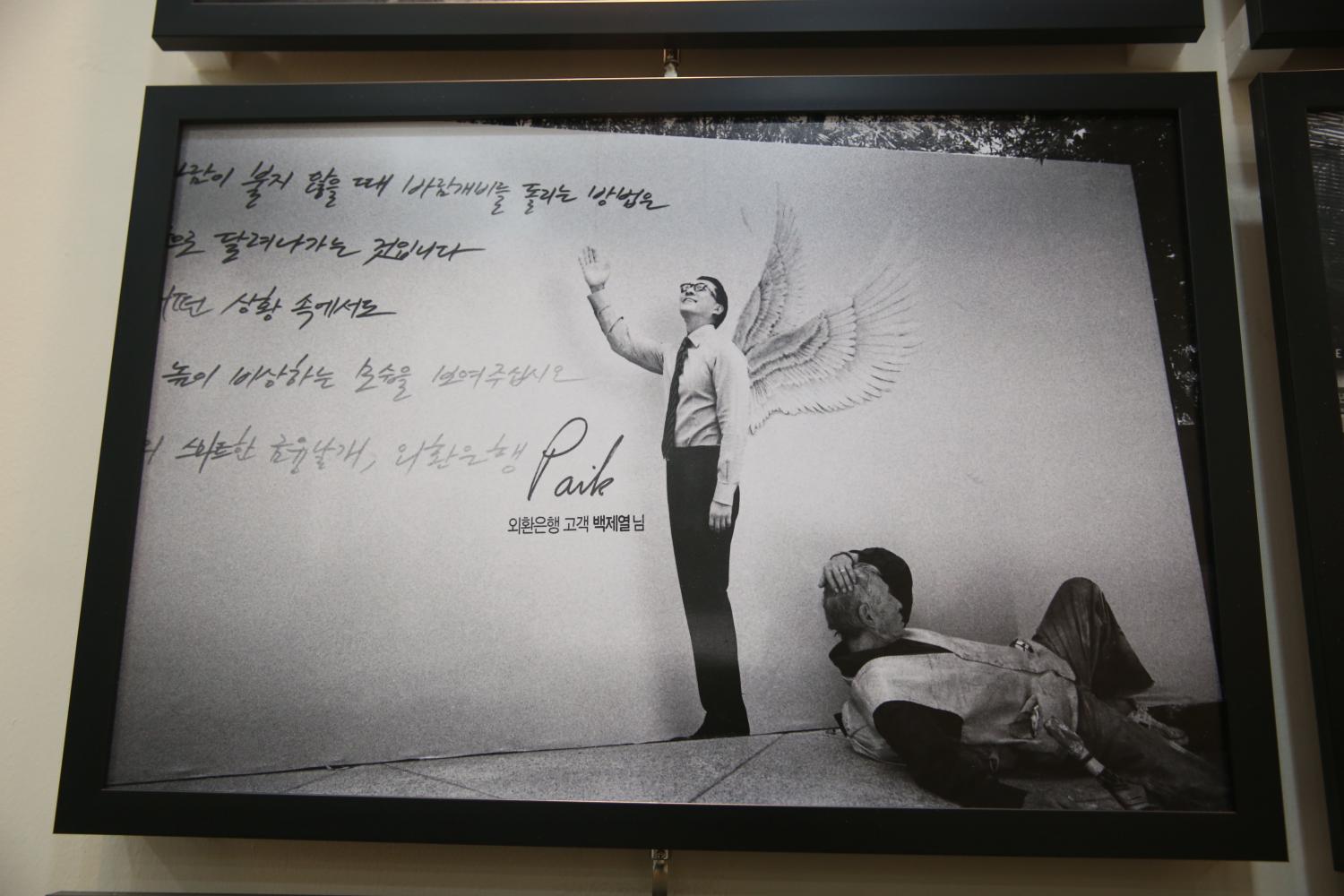 Photo of an old man in a modernised area.