The blanket that protects

published : 19 Feb 2020 at 04:01
newspaper section: Life
writer: Yvonne Bohwongprasert
The success of 'Art For Resistance: Quilts Of Women Human Rights Defenders' was a wake up call to do everything in our power to protect the human rights of women. (Photos courtesy of Protection International)

Quilts as an art form to address human rights is a novel way to encourage society to stand up and collectively fight for a social cause that impacts people from all walks of life.

"Art For Resistance: Quilts Of Women Human Rights Defenders", held earlier this month, was one such event with a powerful social message: "Have I done anything today to protect the rights of women?"

The social-awareness event, which was launched in 2018, had a record 54 participants -- two of whom happened to be men -- sharing their personal stories of fighting for human rights in various sectors of society on colourful quilts they stitched together on their own.

Besides the exhibition, there was a panel discussion on the situation of women human-rights defenders in a pseudo-democratic Thailand.

The idea of quilts to raise awareness on the issue came from the colourful quilt squares Chilean women used to tell their stories of life under the Pinochet dictatorship, which routinely violated human rights.

Despite the lives of these women having been darkened by poverty and oppression, their vibrant and visually captivating denouncements were a strong tool of resistance. 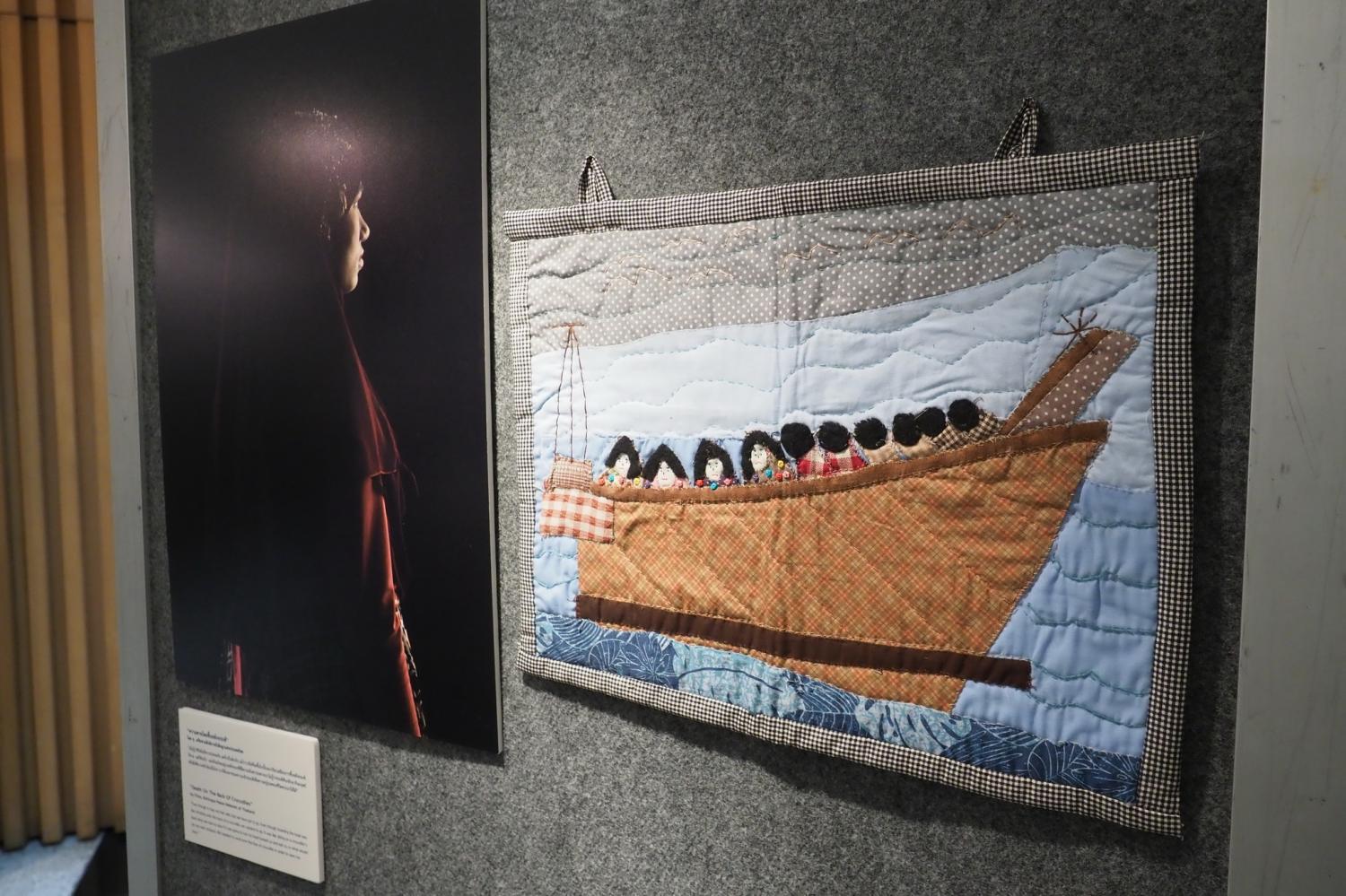 Protection International (PI) Thailand, a non-profit organisation researching strategies and security-management tools that protect human rights defenders, and the Canadian embassy in Thailand, played a vital role in staging this year's event, which received a warm welcome from the public judging from the attendance of visitors.

PI representative Pranom Somwong, who helped propel the event from day one, said it was encouraging to observe the enthusiasm with which grass roots female human-rights defenders had collectively bonded by using quiltmaking as a means of showcasing their fight for justice and promotion of human rights.

"Each quilt tells a story of injustice and the fire in each woman to overcome her struggles by acquiring a relentless spirit to seek justice for their families and communities," remarked Pranom.

"This form of sociological storytelling impacts people because it is derived from real-life incidents of individuals residing in rural and remote areas who find they lack sufficient platforms to communicate their stories and issues by any other means but the cathartic and advocacy-oriented medium of art."

Pranom said that during the process of making the quilts, each participant shared her sights and experiences of how she remained safe through the perils of fighting for her rights. 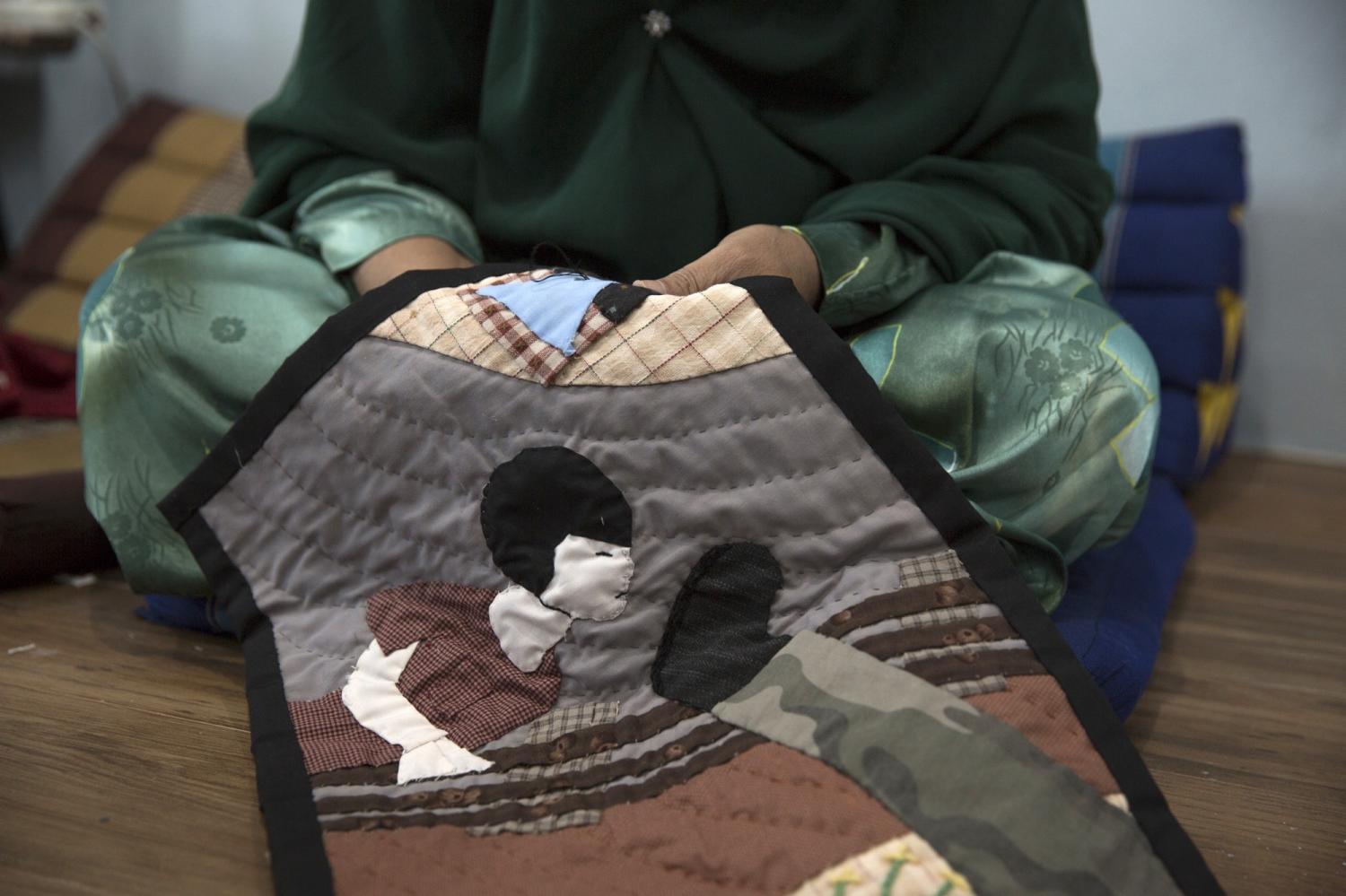 A woman participating in the event demonstrates her flair. Protection International

Quiltmaking thus became a way to join women together to cement trust and solidarity among fellow female activists and others advocating for change.

Adding to that, she said: "The quilts themselves also visually and tangibly represent the internal and external obstacles that they confront in their fight for human rights and dignity for all people. Furthermore, the quilts creatively capture their demands in alignment with the Committee on the Elimination of Discrimination against Women's recommendations for the Thai government."

After they are able to share their stories, she said, the next step was to attentively listen and seek a viable solution together.

"We need to make sure that women shall not be chastised for rising up to defend the rights of others," stated Pranom.

"A more concentrated effort must be made to not just visit and listen to what these women require, but their needs should be met. 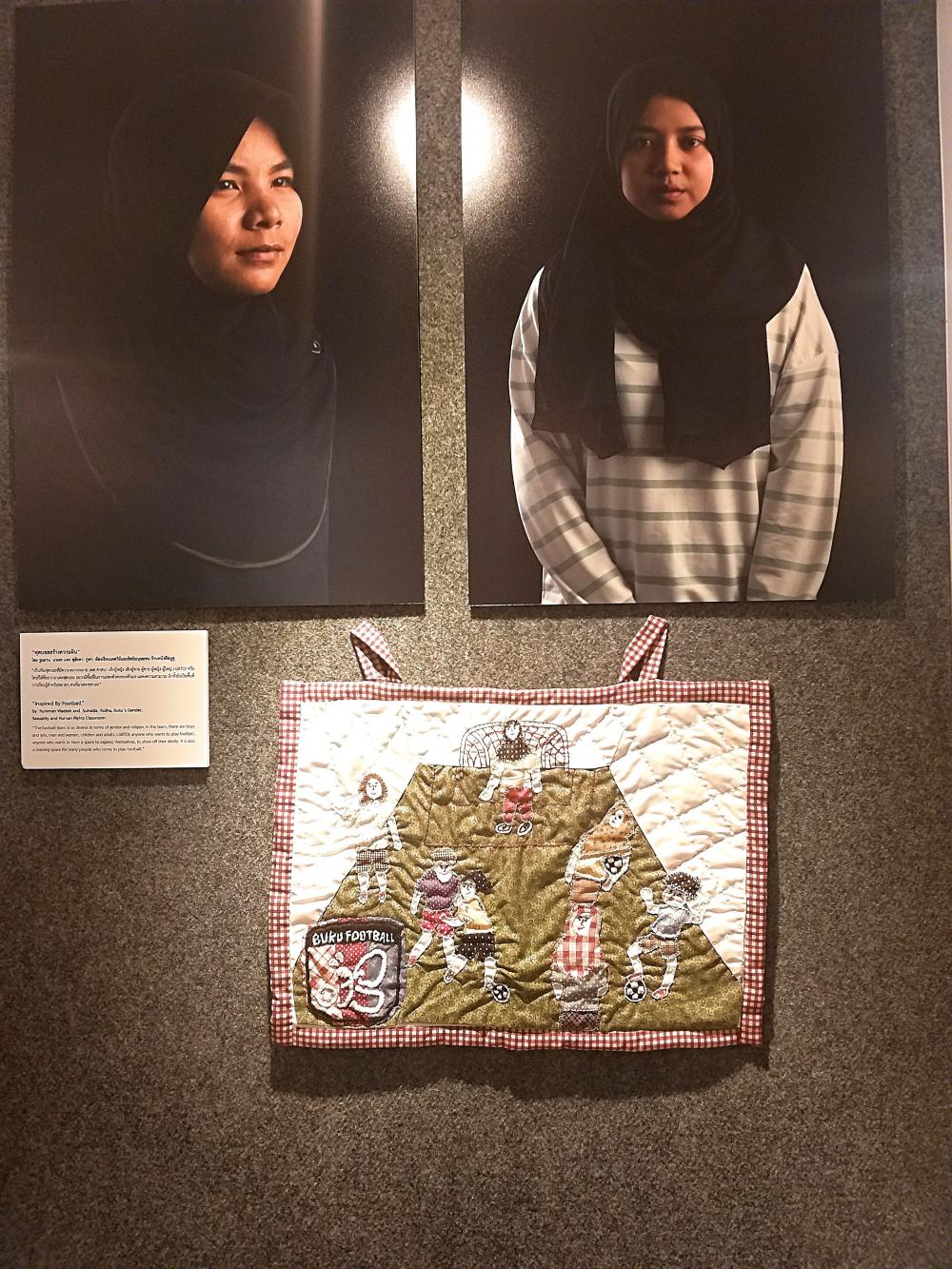 On the multiple issues represented at the public awareness art event, Pranom said that this year covered a large spectrum of needs, offering a venue for everyone from Rohingya refugee women sharing their plight to members in the Southern Peasants Federation fighting for their rights to voice their grievances.

To get the opinion of what this event meant to the participants, Life caught up with one of the 54, a shy 23-year-old Lahu housewife named Yupin Sacha. She is a relative of slain ethnic Lahu activist Chaiyaphum Pasae, 17, who was shot dead by a soldier three years ago for allegedly carrying drugs.

Following Chaiyaphum's death, a guardian, Yupin's sister-in-law, was falsely arrested for conspiring to sell drugs with the deceased, and incarcerated for 331 days before the court found her innocent.

Pranom and her team have worked closely with Yupin and the Lahu community in Chiang Mai during this period, assisting them with all the support they need to continue the legal fight for justice -- which, among other issues pertaining to this case, is compensation for the time Yupin's sister-in-law was wrongfully jailed. 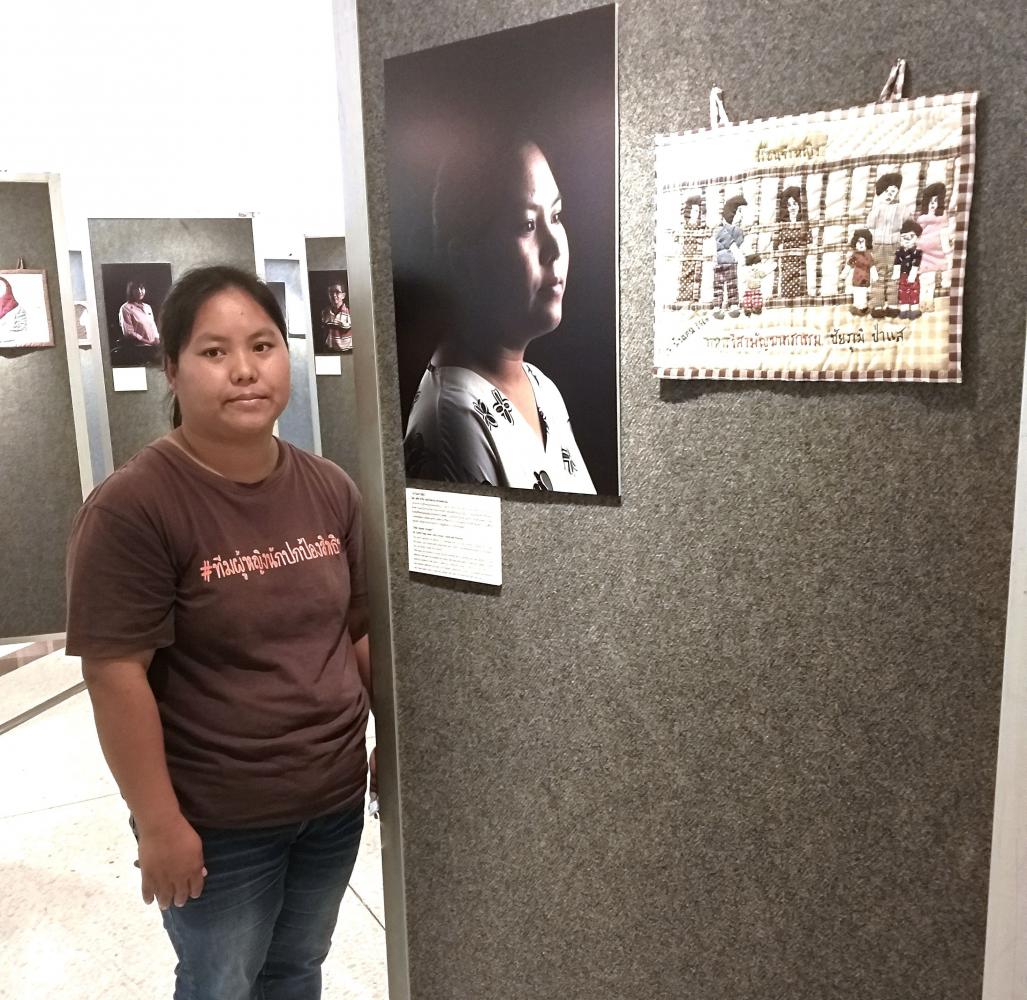 Yupin Sach, a relative of Lahu activist Chaiyaphum Pasae, who was shot dead by a soldier in 2017, shares the repression of her people by the authorities. YVONNE BOHWONGPRASERT

"Despite the fact that three years have elapsed since the untimely death of Chaiyaphum, my heart still aches for him," said Yupin, whose quilt describes the repression of her people by authorities.

"Shortly after Chaiyaphum's demise, military commandos stormed our close-knit community of 70 families to arrest my sister in-law, accusing her of collaborating with him to sell drugs. It was a frightful day that is etched in my memory forever.

"All I can remember is that everyone was petrified. We felt helpless. The experience shook me to the core. Today, when I see a man in military uniform, I begin to experience a panic attack."

Yupin's quilt is a reminder of that fateful day.

"It was an emotional time for me stitching this quilt, because it was reminiscent of the death of Chaiyaphum and the unjust arrest of my sister-in-law.

"I want to use this opportunity to tell society to stop looking at Lahu people as drug addicts and drug pushers. We have a wonderful culture and history that I would like to share with everyone. I want everyone to remember that there are good and bad in all societies; singling out indigenous communities because they have little means to stand up for their rights is wrong!" 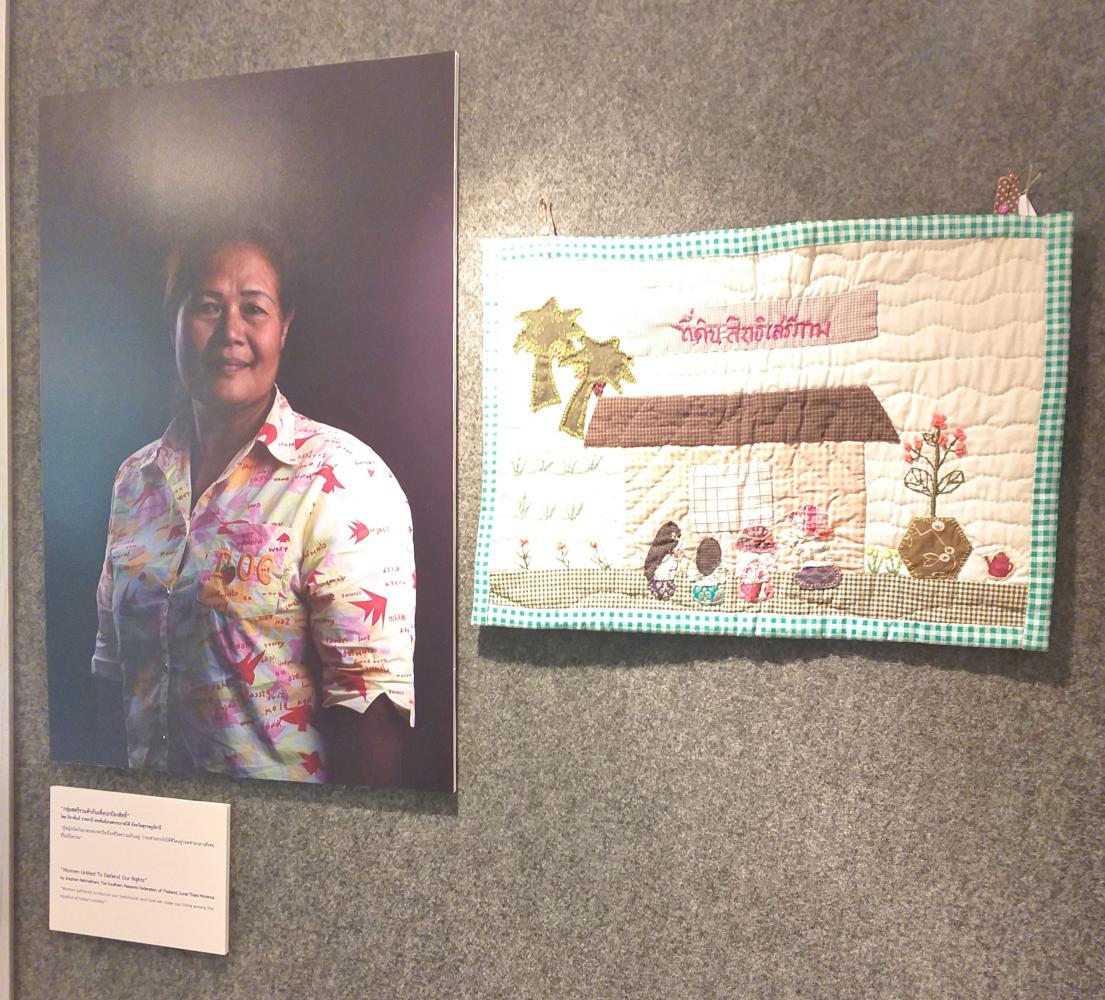 Jiraphan Ratchathani of the Southern Peasants Federation titles her work Women United To Defend Our Rights. Her quilt shows women gathered to discuss their livelihoods and how they make their living amid the injustice they face in today's society. YVONNE BOHWONGPRASERT