When Hollywood comes to town

B. Mag was on location for the shooting of big-budget action film Extraction, now on Netflix, and we talked with Chris Hemsworth as well as the film's other stars, all while observing how the whole thing went down

After being given ear plugs and goggles, we were ready for some action.

On cue, Chris Hemsworth jumped on top of a car, and around him came thunderous shots of gunfire that saw hot shells flying everywhere. He ducked and fired back at the men in uniform -- a task he repeated multiple times in the heat and dust of Nakhon Pathom. The province's neighbourhood was transformed into a set for the Hollywood star's latest action-adventure film, Extraction, now streaming on Netflix.

Back in January last year, B. Magazine visited the set of Extraction (then known as Dhaka). Hemsworth starred as Tyler Rake, a mercenary set on rescuing Ovi (newcomer Rudhraksh Jaiswal), son of a drug lord who is kidnapped and trapped inside an impenetrable city. The film also stars David Harbour (Stranger Things and Hellboy), Iranian actress Golshifteh Farahani (Paterson and Body of Lies), Randeep Hooda (Highway, Kick and Sarbjit), and more. Joe Russo wrote the screenplay.

Extraction sees stunt coordinator and second-unit director Sam Hargrave in his feature-directorial debut. The film promises and packs a lot of action scenes, with car chases, explosions, gun fights, and a long one-shot action sequence that is set to take everyone's breath away.

At the same time, Hemsworth -- who sat down with the visiting media between shots -- said the film has also got a lot of heart. He described the bond between his character and the boy Ovi as "the heart and soul of the movie".

"It's a very odd coupling in the most unique circumstances. I guess we're fulfilling something they're both missing," said Hemsworth.

The actor said he initially wanted to try his hand at other genres, as his career has been dominated by action in the past few years, with the most notable role being Thor in the Marvel Cinematic Universe. At the time of shooting Extraction, he also just wrapped his work on Men In Black: International. In the end, it was the "beautiful heart" in the story that drew him back to the project.

Tyler Rake, to Hemsworth, is like a throwback to Steve McQueen's type of action hero who takes on an entire city and has the city converge on him. A man of few words, he also has layers of deeper elements. 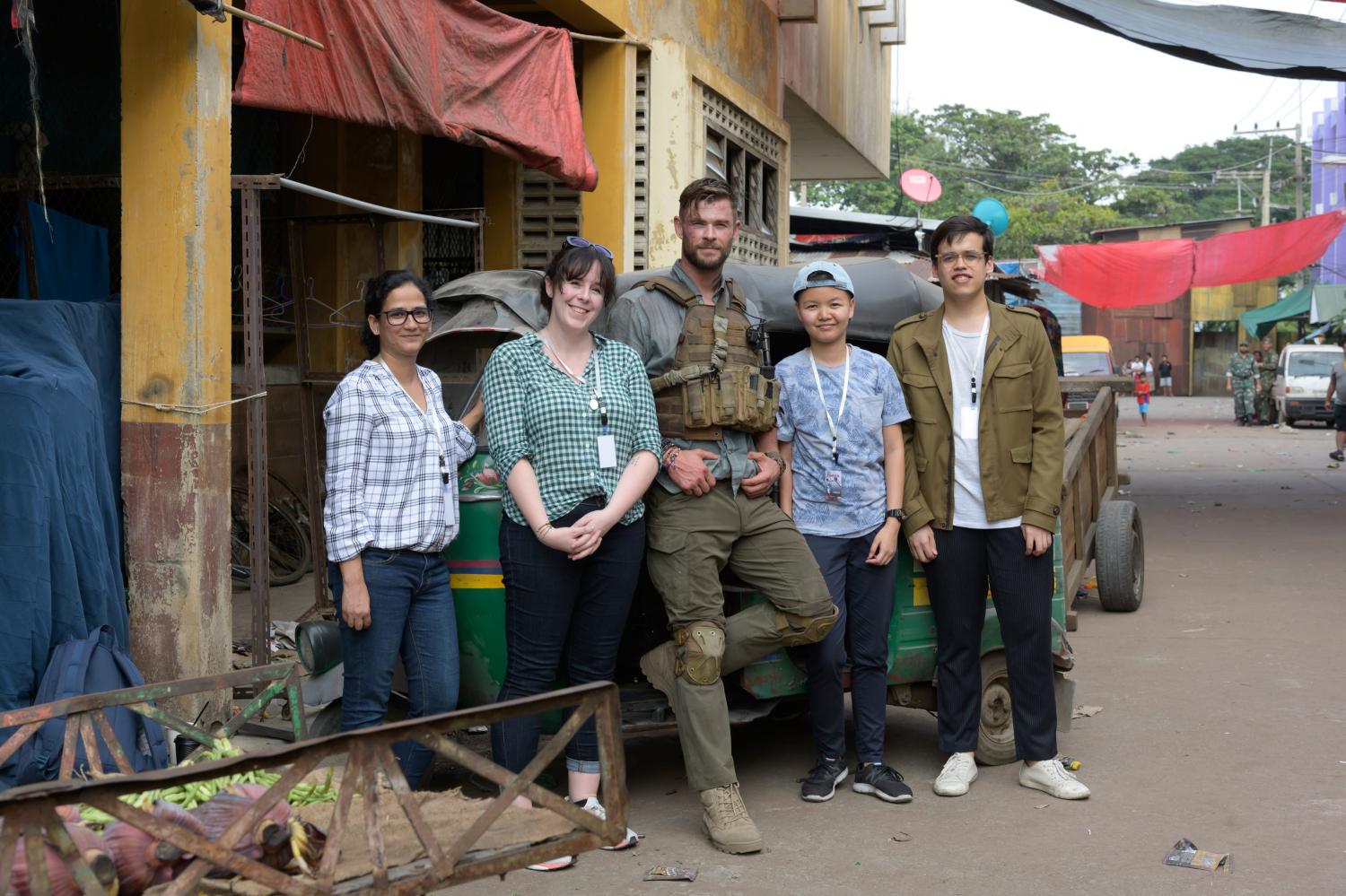 Hemsworth, centre, pictured with visiting members of the press on set in Nakhon Pathom.

"[Rake] is an angry old bear. That's what we kind of refer to him as all the time," the actor added. Rake is stern and quiet. A broken soul, which the film will also explore, and how he became that way.

Hemsworth previously worked with director Hargrave on the MCU and called him "the top of the pyramid" in the world of second-unit stunts.

"But what I was so pleased with was he's such a sensitive soul himself," said Hemsworth, adding that a lot of the dramatic scenes he did were really intimate, which made him thankful for Hargrave's ability to translate this emotional journey to the screen.

"[These scenes] are some that I've been most proud of. It's gone to places that I haven't really explored before, and that was all due to [Hargrave's] orchestration of the scenes."

With Hemsworth leading the cast, the film also introduces a new promising star, Rudhraksh Jaiswal. The young actor had appeared in commercials and movies in India, with Extraction being his international feature-film debut. He was 15 at the time of shooting and was studying for an exam on his day off. The filming in Thailand marked his first time out of India. He was humble and joyful during our talk as he took us through his audition process, his first meeting with the director (to whom he asked why everyone disappeared at the end of Infinity War), and how his mother didn't know who Thor was.

"I didn't know that this was gonna be a Netflix film. I thought it was Bollywood," said Jaiswal. The scene he did for his audition was one where Rake was instructed to leave Ovi behind, which Ovi begged Rake not to do, proceeding to tell the ­mercenary about his troubled relationship with his father.

"Ovi needs love. He's not getting love from his family," said Jaiswal. "Gradually, he finds love from Rake. He's spent most of his time with Rake and thinks that Rake is, kind of, his father."

Over the course of filming, Jaiswal also got to spend more time with Hargrave and Hemsworth, whom he referred to as "Sam-sir" and "Chris-sir", respectively.

"Chris-sir also taught me some of his acting tips and tricks, what to do and what not to do when you come in front of the camera."

"He also told me to be yourself and never change," he added.

Hemsworth himself said he was blown away by Jaiswal, who took direction really well and was able to transform in drama scenes that had all the adults tearing up. 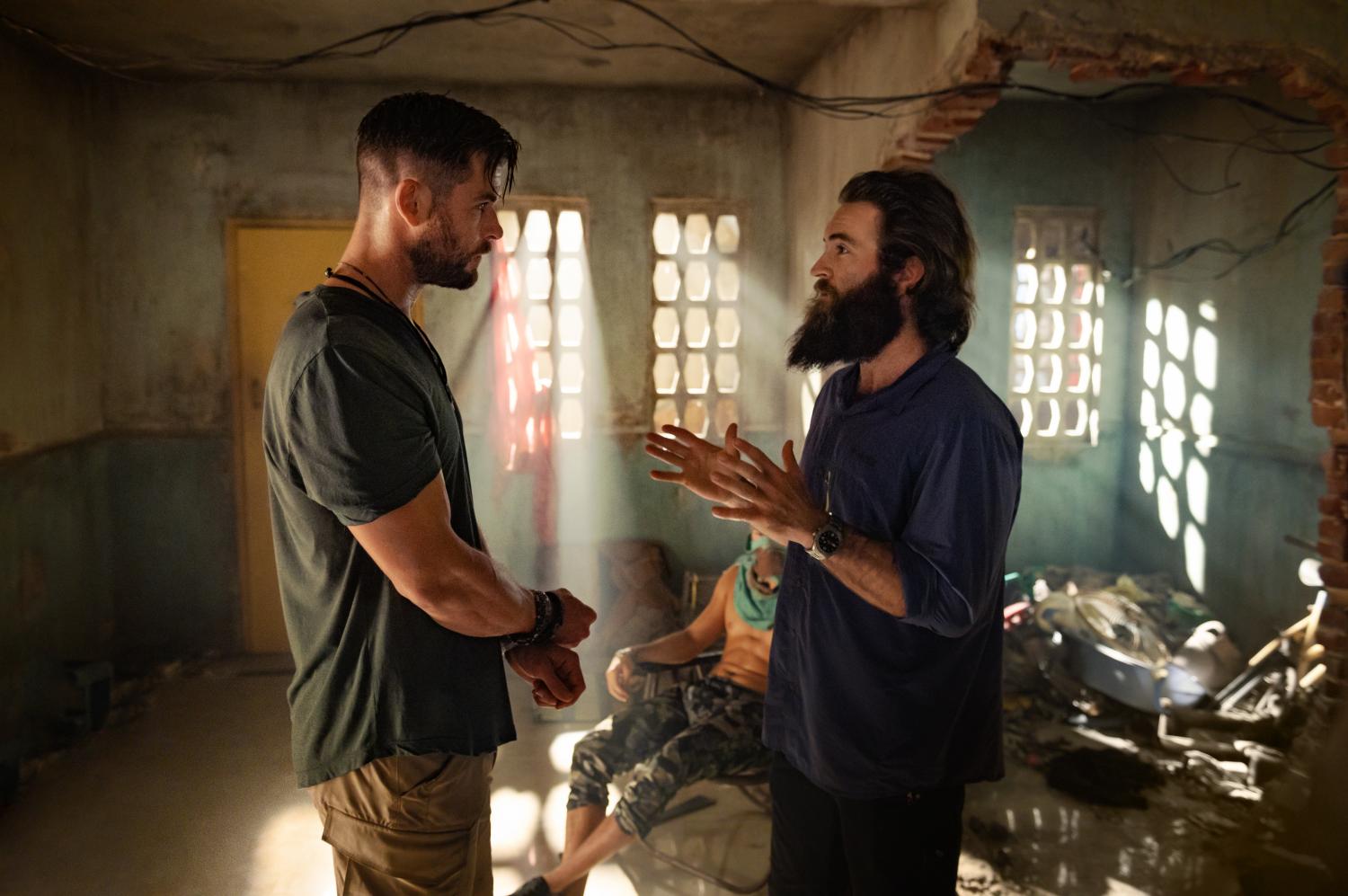 Hemsworth and Hargrave on set.

"[In one scene], he was pouring his heart out and I'm like, I'm not supposed to be upset in this scene. It was stabbing me right in the heart. I looked over at Sam and he was kind of wiping his eye," Hemsworth recalled.

Extraction was filmed in Ahmedabad and Mumbai in India before relocating to different provinces in Thailand. With Hargrave at the helm, the director took the action with him wherever he went. From stunt work to his directorial debut, Hargrave (who kept a long production beard for the film) said it felt like a natural progression, but also one with more responsibility.

"For me, it's like coffee or caffeine. As soon as I started with action, my energy just went through the roof. I can have two hours of sleep and will just be going all day with it. It energised me. So, it's like going back to a familiar place and I love it."

From his work in Atomic Blonde, especially the long-take fight sequence in a stairwell where Charlize Theron took on two baddies, Hargrave continues to push the envelope in Extraction. The filmmaker teased about the long one-shot sequence with combat and car chase in his directorial debut, which follows not only Rake and Ovi, but also other characters to show intersecting stories. He called it "extremely challenging" but also one that was well planned out.

Nevertheless, the director said that he wasn't simply doing this to show off his crazy talent or just because it's cool.