A universal language? A medium to send messages across? Therapy? Or mere entertainment? Music serves different purposes and has been known to have great power over the human psyche.

Although Thailand's mainstream music scene over the years has been largely dominated by love songs, the country's music industry has also seen a great surge in protest songs, which have been used as a device to engage the masses to push for social and even political change. Whenever people get fed up with the status quo, they have started singing about it.

The connection between music and politics in Thailand can be seen largely through the works of various artists, who have made statements in their songs through lyrics which call out specific social problems. Protest music came into the spotlight in the late 1970s through many luk thung artists or from folk and rock, such as Caravan and Carabao, Pongsit Kamphee, and more recently artists in the underground scene like metal band Bomb At Track or hip-hop group Rap Against Dictatorship (RAD), whose now-iconic single Prathet Ku Mee (What My Country's Got) featured strong protest and anti-government lyrics.

"I wouldn't call it 100% protest music but I just found a way to blend my views of Thai political disruption stories together with more contemporary experimental electronic music," said Pisitakun.

"I just want to prove to listeners that political music isn't always necessarily boring but instead can be fun and playful too."

For over a decade, Pisitakun has been better known in the art scene as a visual artist who works intensively in drawings, paintings, installations and animations. He has exhibited his work internationally in countries including Japan, South Korea, Indonesia, Hong Kong, China and France, showcasing artwork that focuses on political and social turmoil. 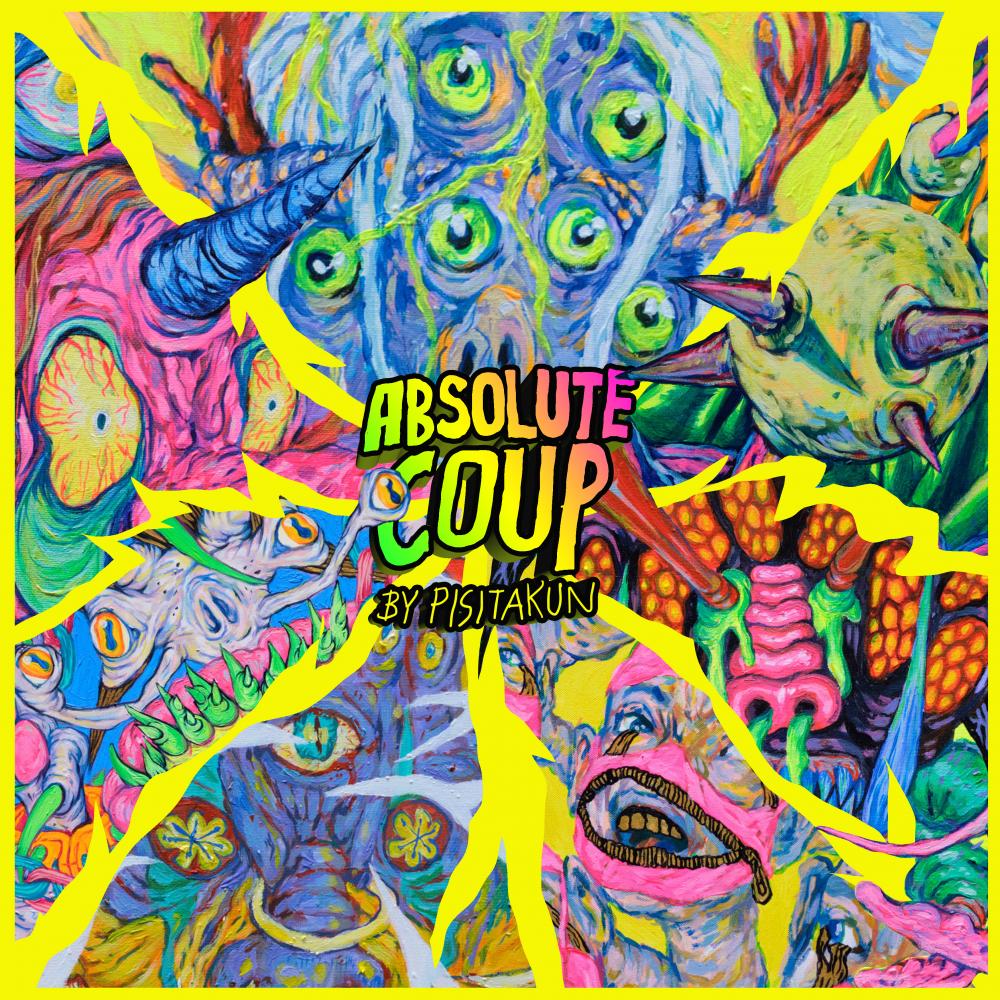 However, in 2015, he began on his journey to becoming a musician when he decided to write music scores and sound effects to accommodate his exhibition of paintings. It was at this time that Pisitakun discovered a new and interesting medium to express his art and vision.

"I grew up as a casual music listener and my favourite as a kid was pretty much luk thung, molam and some heavy metal. But honestly, I never knew how to play instruments myself because I had zero background in music theory and I didn't know any rules of composing sound," he said. "But when I attempted to compose and experiment with sound effects for my show and learned how to use all the equipment, I became fascinated to learn what different types of noises and sounds can do to our brains and how they can change mood and emotions."

Pisitakun began performing self-composed experimental techno at parties or art exhibitions at different venues around Bangkok, one of which included Jam, a small but very hip bar in the Sathon district that regularly showcases underground music, films and art exhibitions. One of his shows at Jam caught the eye of Saphy Vong, founder of the Chinabot label, a music platform from the UK, who then invited Pisitakun to be one of their latest artists in a special project created to change the dialogue surrounding Asian music.

Absolute C.O.U.P. is Pisitakun's second release on Chinabot following 2018's SOSLEEP, which had much darker tones of techno and experimental music. SOSLEEP was inspired by the death of his father, who was suffering from cancer, and the album features traditional mourning instruments mixed with harsh noise and techno beats wrapped around intimate recordings of hospital machinery, Buddhist monk's funeral chants, and the messy chaos of grief. In Absolute C.O.U.P., Pisitakun focuses on brighter shades of mood and tone but the album is still very experimental. The album is now available to purchase on colourful cassettes and digital format and includes a limited gold bullet-shaped USB stick -- a subversive nod to the power and wealth of the Thai military elite. To accompany the album, Pisitakun designed all of the artwork and painted images to visually represent each song, which will be included as stickers with the physical release. 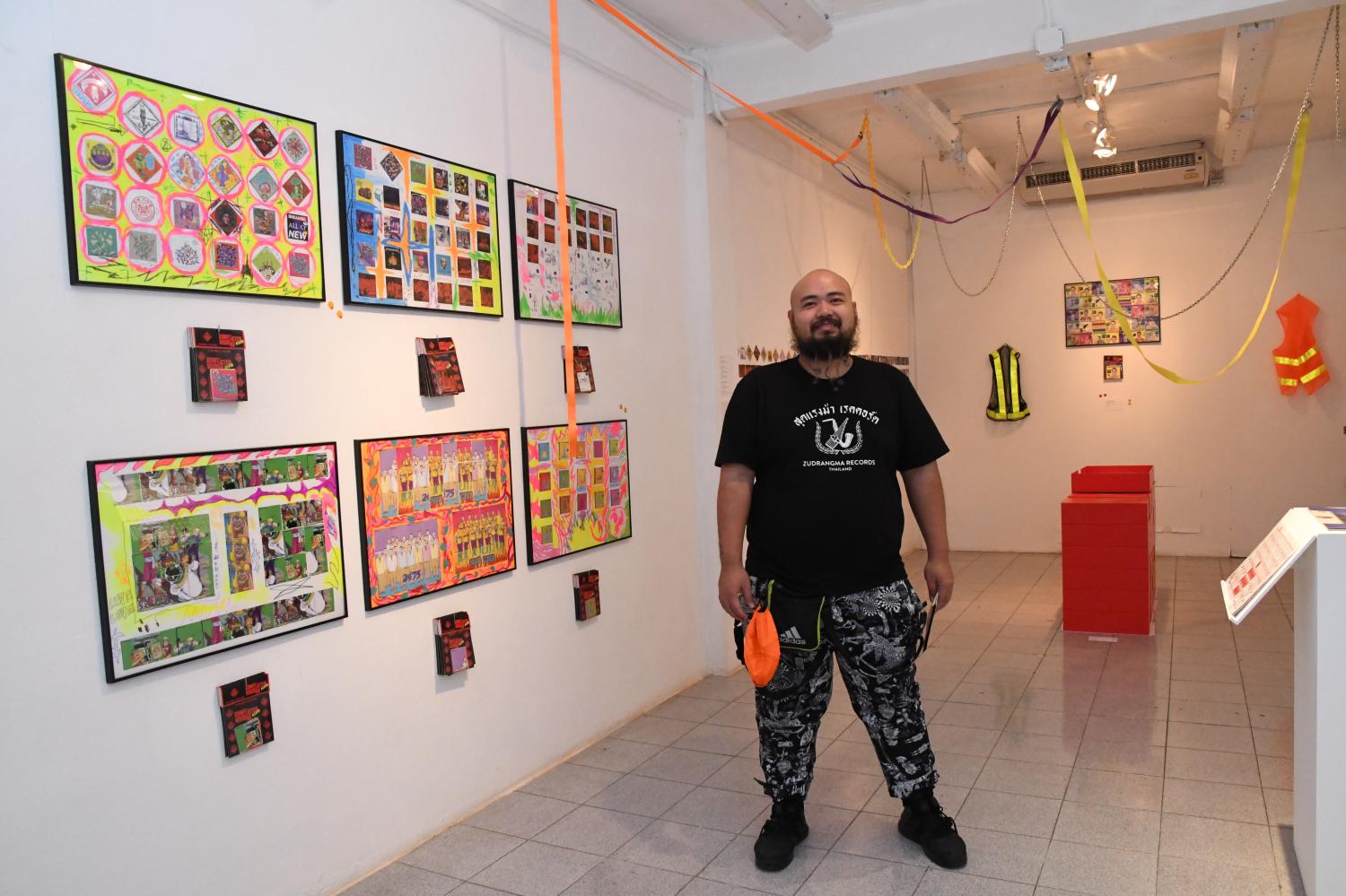 Pisitakun at the recent 'Conflicted Visions Again' group exhibition at WTF Gallery where his latest work Iconoclastor was also on display. (Photo courtesy of Pisitakun Kuantalaeng)

The album consists of seven tracks, plus three remixes of instrumental hardcore techno and experimental dance music, molam and military marching beats. On top of that, he has created a chaotic atmosphere by adding samples of some old Thai songs and mixed them through a series of politically-related sounds taken from real footage and news. The opening track MoMoNarNarChy features a small segment of the Sansern Phra Baramee, the Thai royal anthem, and transfuses it through his analogue synthesiser to create a dissonant, unfamiliar version of the song mixed with techno beats and skittish distortions. Another track, ArArMyMy, samples a retro luk thung song called Poor Soldier as well as a 2014 speech given by Gen Prayut Chan-o-cha, who is still in power today, after his successful coup.

"It took around two years for me to finish all the recordings. I was trying to collect all these sounds, voices, or samples from old traditional tunes from different regions in Thailand which relate to the coup and piece them together to create something wholly new," he explained.

"Since my birth, I have witnessed three different coups out of a total of 13 that have taken place in the country. And just by looking at these numbers, I came up with the question: why do we have so many coups and is this normal? I am hoping my new work can manifest a political movement through the creation of music and instrumental tracks that don't always rely on lyrics as most previous political songs have done. Rather, I wanted to convey my message through the meditation of noise through which the audience can derive their own ideas and meanings."

While considered as dance music, Pisitakun's tracks aren't always pleasant to the ears at first listen. Each track pulls from a wide array of musical references and he utilises a blend of woozy maximalism and driving beats to create a sense of disorientation.

"My songs are sometimes slow and sometimes they are suddenly sped up without any warning. The beats are busy and unpredictable. I think they're perfect to represent uncertainty and how fast things change in Thai society. It is like a coup in that you never know what and when it will happen again in the future."