published : 6 Aug 2020 at 04:00
newspaper section: Life
writer: Suwitcha Chaiyong
Chulayarnnon Siriphol and his video installation for 'Give Us A Little More Time'. (Photo by Varuth Hirunyatheb)

On May 22, 2014, a coup d'etat by the Royal Thai Armed Forces was declared. At that time, well-known film director Chulayarnnon Siriphol, director of Ten Years Thailand, who was reading and watching the news from traditional media -- newspaper and television -- realised that the media was not reporting on the real events that he saw on social media and the internet. It was at this time that it dawned on him that traditional media was under some control of the junta government.

To retaliate against controlled media, Chulayarnnon used newspapers to design collage artworks which he aimed to create daily until there was a national election. It took Chulayarnnon five years to complete his mission as elections were finally held on March 24, 2019.

"The military junta attempted to apply top-down control on traditional media, so I took what they tried to control and presented the news from newspapers in a different perspective. I don't claim to be right but my opinions are different from what the government wants us to see. I used the collage technique because it was like deconstructing media structures [with a scissor or a cutter] and reconstructing them," said Chulayarnnon. 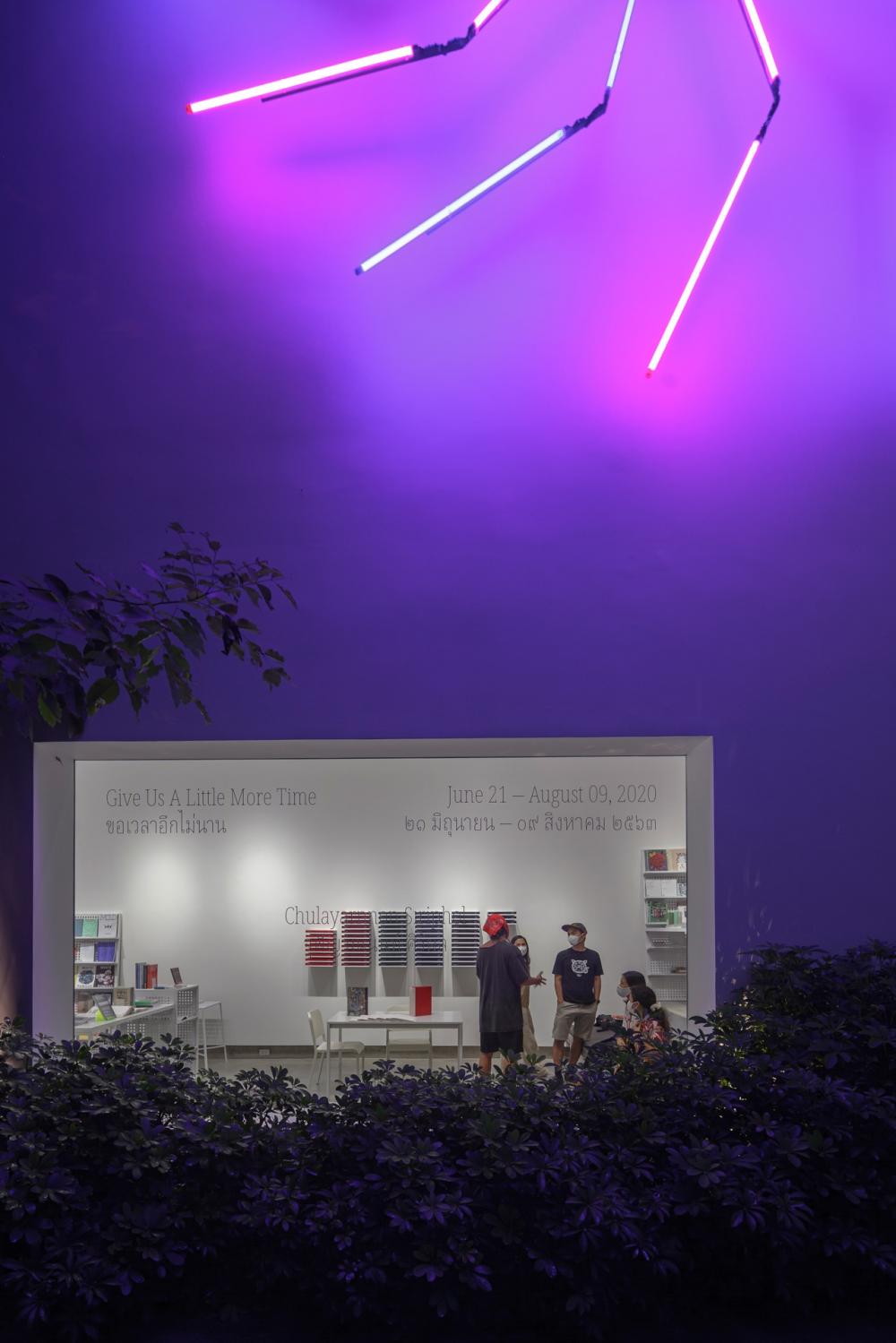 Collages are exhibited at the bookshop library. (Photo courtesy of Bangkok Citycity Gallery)

In addition to 1,768 collage artworks, Chulayarnnon, as a filmmaker, used his talent in visual techniques to create video installations in four screens from the collages. The creative collages and the video installations are being exhibited at "Give Us A Little More Time" at Bangkok CityCity Gallery.

Life spoke to Chulayarnnon about his exhibition and his views on politics.

What does the title 'Give Us A Little More Time' mean to you?

'Give Us A Little More Time' are some of the lyrics of the military junta's song Restoration Of Happiness. In the song, the government asks for a little more time but they actually have had control for a long period. I named the exhibition after the lyrics to demonstrate the junta's power. We can't see the end of their time. They announced an election every year but postponed it again and again. During the past five years, I reacted to the news differently each day. Some days the news would give me hope while other days, I would read the news and feel very discouraged. 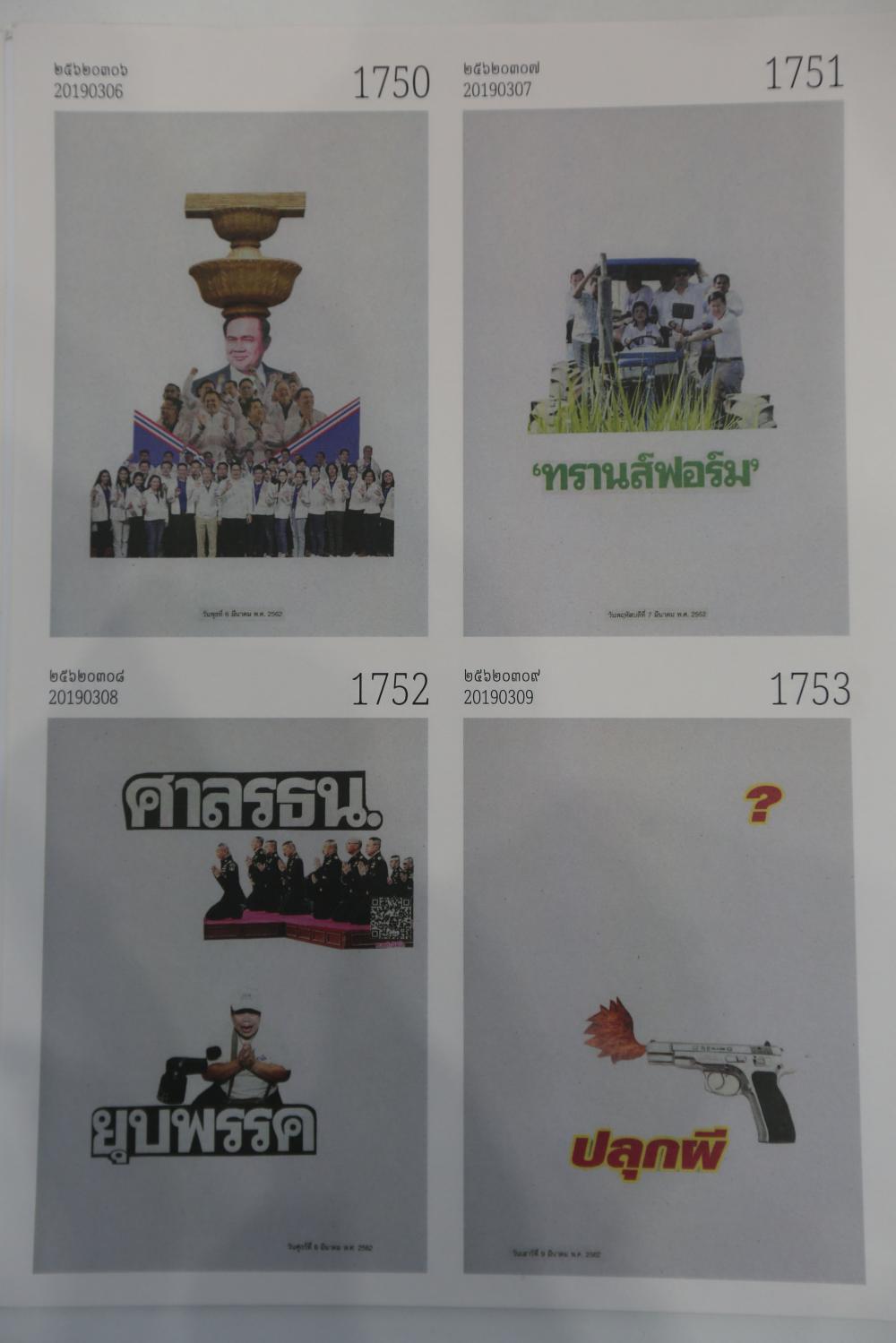 Chulayarnnon created his own content from newspapers. (Photo by Varuth Hirunyatheb)

What is the main message of this exhibition?

Between 2014 and 2019, physical media began to disappear from the market. Some shut their businesses down or moved to a digital platform. There wasn't only one truth in the media like before. The communication platform has changed and now everyone can choose what they want to believe on various outlets. It wasn't like this in the past when one group could relay a top-down message and everyone would believe that information. Communication is the main idea of this exhibition.

Can you tell us more about how you created these collages?

I tried to use as many newspaper clippings as possible. After reading through many articles, I noticed that some newspapers didn't want to talk about political news. When I saw some content was missing from an article from a newspaper, I created my own content and inserted it. I like sarcastic jokes, so my collages are humorous. Some of this content cannot happen in the real world but only in my collage world.

What was your idea behind the video installations?

After noticing how media had changed, I converted 1,768 collage pieces for the digital domain, which is like a parallel world of communication. I scanned all collages and chose some pieces to create an animation. Stories in the animations feature five characters -- a cyber warrior, an idol of light, a political prisoner, a veteran and a scum of the earth artist. These five characters represent people in society. Video installations are a replica of communications on social media. The videos are displayed on four screens in the main gallery and they all show the same content but with a time difference of five minutes between each screen. When a visitor is here, it is like being in a virtual space with lots of data. You can compare it to social media where we use Facebook and Twitter news feeds, which deliver content based on algorithms.

After the elections, do you still feel the media is state-controlled?

The media isn't controlled directly in terms of what they should or shouldn't publish but each medium has a connection to investors who either agree or disagree with the government. We can see the media structure and the viewpoints of people behind it by reading the news they feed us.

Good media should present various perspectives and not be biased as this will provide an opportunity for audiences to decide for themselves. Currently, hosts of some TV news programmes add their opinions on top of the news. This is different from the past when newscasters only read the news to inform who, what, when, where and how. I disagree with programmes where the host expresses his or her emotions and turns news into a TV drama.

A catalogue of collages. (Photos courtesy of Bangkok Citycity Gallery)

Do you think traditional media can't be trusted?

I think there is no medium that we can trust. Some media platforms claim to present the truth and tell us why we must trust them. However, there is a lot of information out there. We should read as much as possible and digest and choose for ourselves what to believe. Every platform can't portray perspectives from all sides. It is our responsibility to screen information accurately and cautiously.

Should an artist get involved with political issues?

Have you ever been threatened because of your expressions on politics like other artists?

Not yet. I'm not sure if I'm on their list either as my works don't criticise them directly. However, there are hidden agendas and I still have some fear. Before this, I wanted to create a Facebook Page called 'Give Us a Little More Time' and post a collage daily, but it was a risk, so I didn't do it. Moreover, I'm interested in underground art where the artist's identity can't be tracked. There is an England-based street artist called Banksy whose true identity remains a mystery. His ideas are interesting. I wish I could do something like that in the digital world. 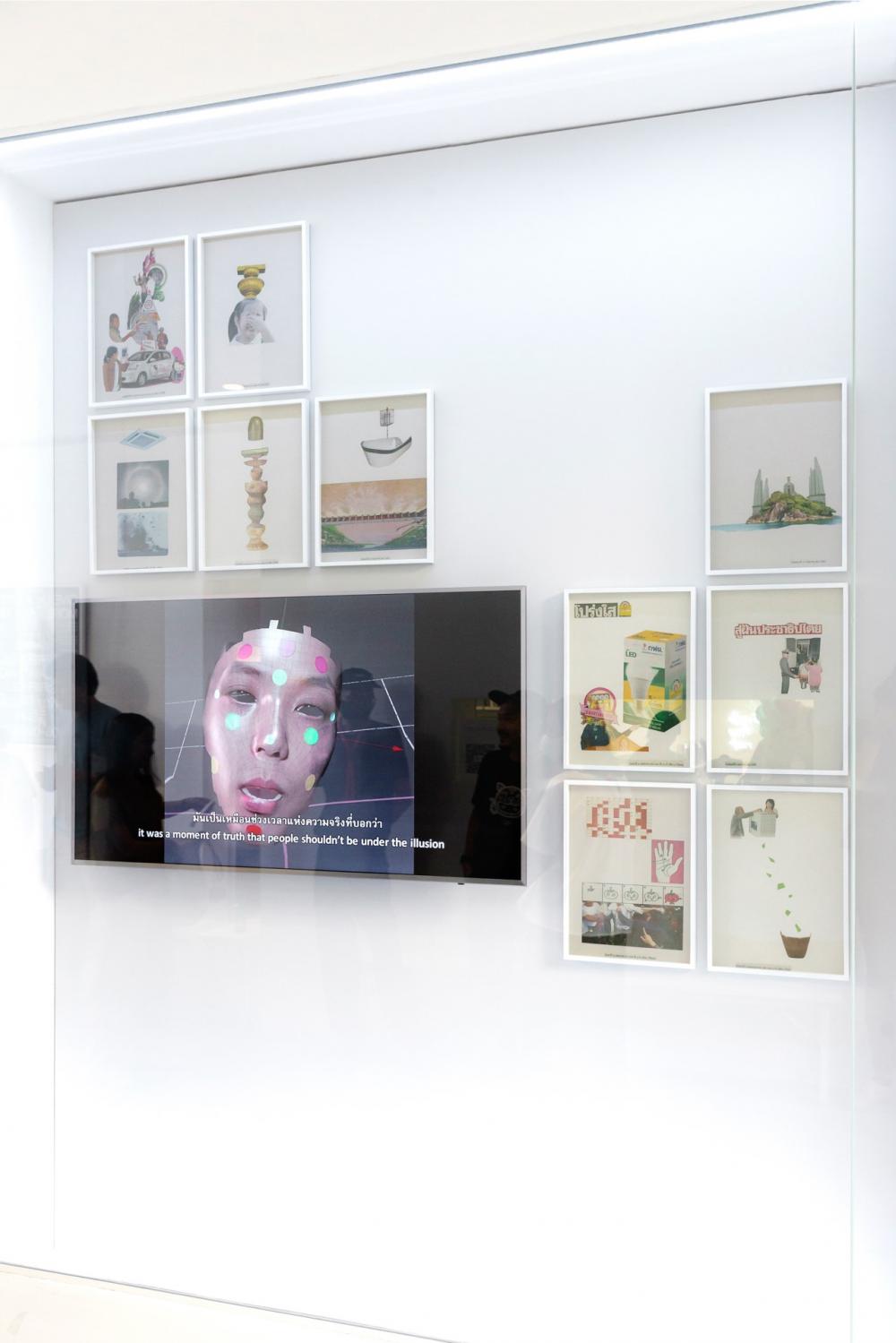 A video summary about the exhibition. (Photo courtesy of Bangkok Citycity Gallery)

When do you think we will have true democracy?

"Give Us A Little More Time" runs at Bangkok CityCity Gallery until Aug 9. Visit facebook.com/bangkokcitycity or call 083-087-2725 for more information.